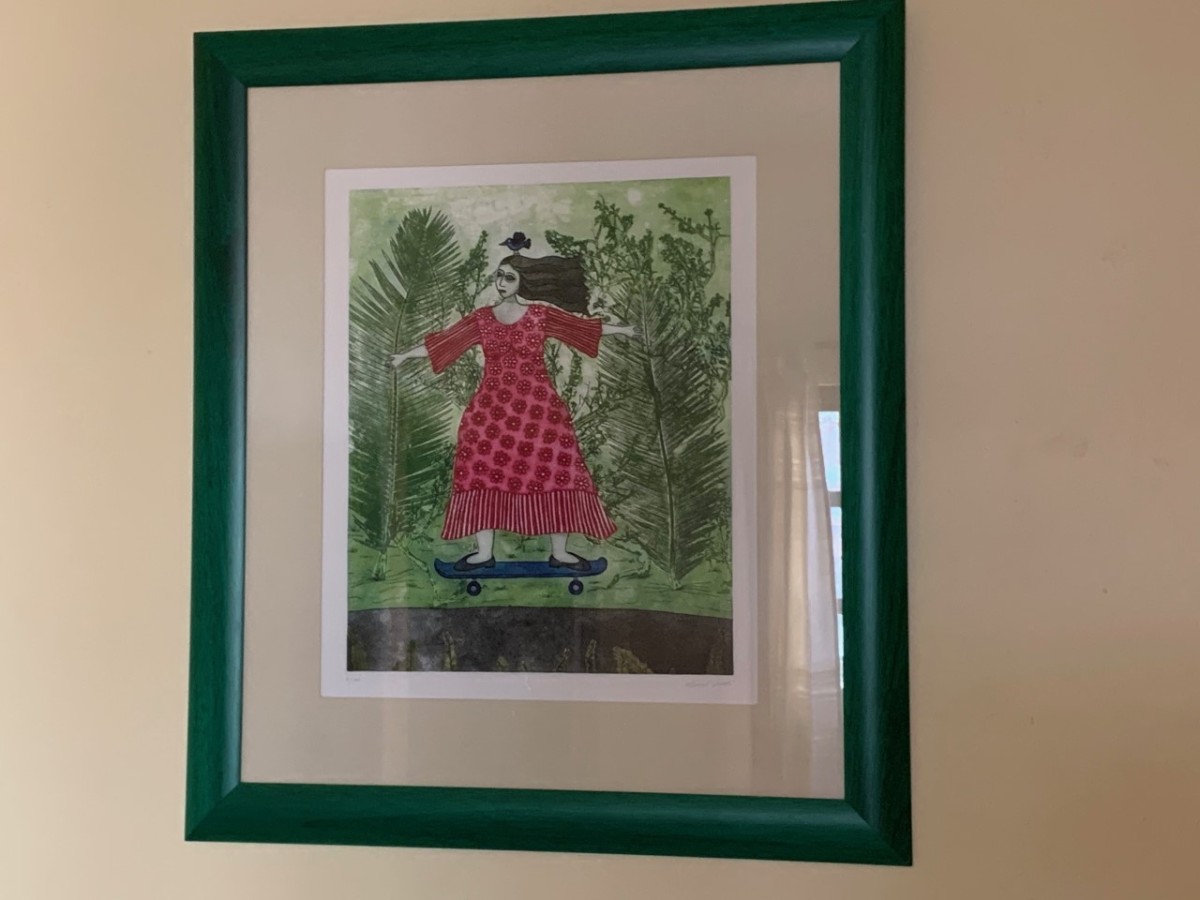 I love to peer at what’s behind people in Zoom and Facetime calls. This is true for the people I know, as well as famous people on TV. I wonder if what they own and how they decorate reflects much about their personality? I know I instantly like people who have shelves of books behind them, but then that’s what I have. Of course, now that Covid-19 has pushed so many people to appear from home I assume more and more people stage their background. I even see articles about how to look more professional on Zoom. And I know YouTubers carefully construct a set to present a creative image for their viewers.

Back in the 1960s, there was a slogan, you are what you eat. Odd, I’ve forgotten why we said that. In the 1970s I learned the term GIGO in computer school, an acronym for Garbage In Garbage Out. Now I wonder if we are what we own? Yet, how much can we guess about a person by looking over their shoulders in a Zoom video? Does this fall under psychological analysis, archeology/anthropology, art criticism, or tea leaf reading?

What do our possessions say about us? Are they like Rorschach images that reveal something about our personalities? The other day I was FaceTiming with my friend Janis who lives in Mexico. She’s only been in her current house a couple of months but she has it fixed up elegantly despite having to bring her possessions there one suitcase at a time. She was giving me a video tour and I looked for indications of her personality in the objects I could see. My first reaction was to think she had nothing personal on display, that it was all decoration because I was only seeing the artwork on the wall and crafts on the flat surfaces. Some were new, and some were from her old house I used to visit.

I then realized my initial thoughts were lame — I wasn’t looking deep enough. It occurred to me that Janis’ personality is reflected in the art objects she buys. She’s a lifelong traveler and all those things I first thought of as decorations were really her art collection from her travels. Each one meant something to her and had a story. For example, the picture at the top of the page. I asked her for its story and she replied:

Does everything we own have a wonderful story like this? Looking around my office here I see that I could probably tell a tale about everything in it. But to be honest, I’m not sure everything reflects my personality — at least not directly. For example, I have a picture of an old man praying. I am not religious, but my mother was, and this picture is something that used to belong to her. And that triggered another line of thinking. Whatever it meant to my mother is something different than what it reveals about me. But whatever anyone else sees into that picture can be completely different again.

Years before my mother died she started talking about how she wanted people to have certain belongings of hers. I’ve known many old people who have done this. I realize now that their possessions were an extension of their personality and they hoped to be remembered by them. Sadly, and I’m not sure I should admit it, but I didn’t keep most of the things my mom left. First of all, she left a whole house full of stuff. My sister and I took what meant something to each of us, but we gave most everything else away. Of my mother’s things I loved the photographs most. Becky, my sister seemed to be partial to mementos more. For many of the possessions my mother left, whatever they meant to her did not come through to me. She collected them before I was born, or after I left home. I didn’t have their story. I kept things like the quilts she made me because I knew their story. And my Mom wasn’t that sentimental sometimes, I once found Becky’s and my Baby Books in my Mom’s garbage can. I kidded her about that.

I’ve always worked at a different level. I don’t care much for things. But I do think photographs are very personal. I think the photographs we keep reveal a lot about us. Susan (my wife) and I have lots of family pictures on our walls, but we don’t collect artwork like Janis. I found seeing these two photos from Janis’ house far more revealing than her artwork. 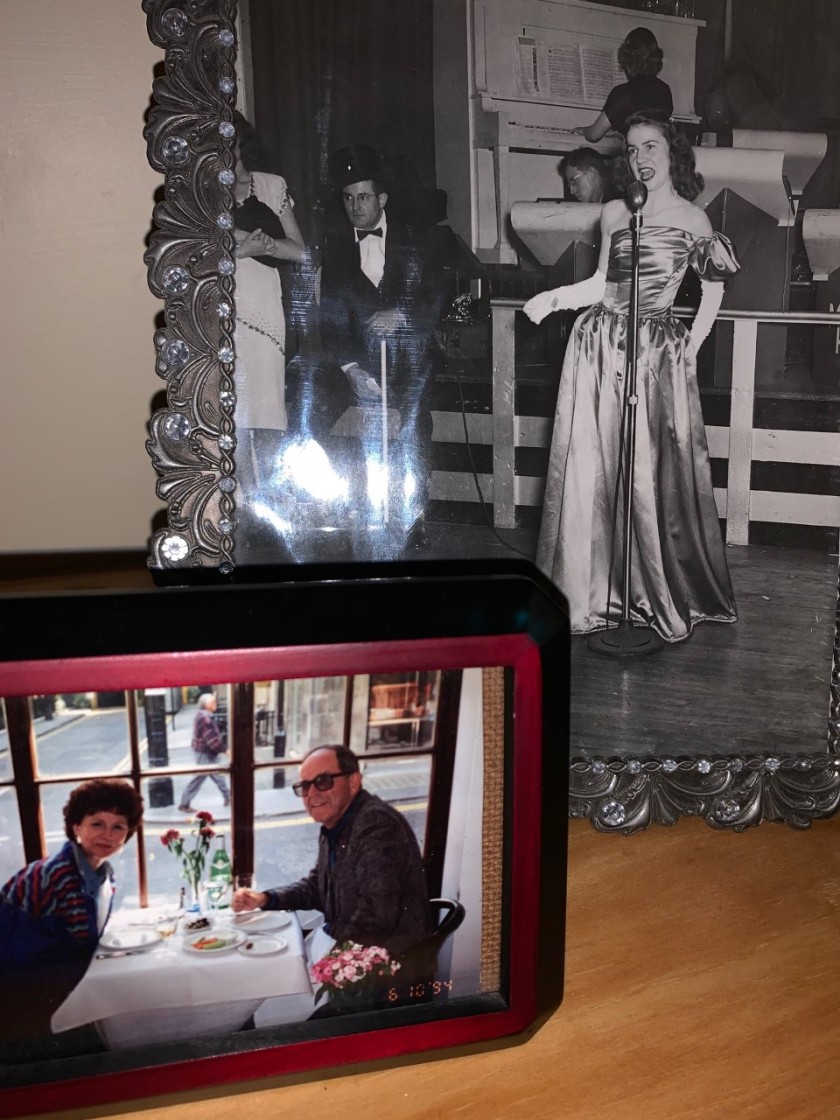 This is the story that goes with it:

Janis has often told me many stories about her Mom and Dad, especially how her Mom used to be a singer and acted in the local theater until late in life. But maybe I’m being too basic in equating pictures of people as being more personal than the objects we own. It’s logical to think family is an extension of someone’s personality, it’s harder to think of the artwork they love as having a deeper personal meaning. Once I started thinking about Janis and how travel is the real love of her life, the artwork she picked up from around the world probably resonates deeply with her personality. But how much could I understand about Janis from just looking at her artwork? Don’t I also need the story?

I realize my casual efforts to decipher people by what they own were much too superficial, but it was educational. I then decided I need to reverse engineer the thought and ask: “Do things I own say anything about my personality?”

Of all my possessions, these are what I relate to the deepest way:

Other than judging me a bookworm I’m not sure people can make much from seeing my books. Even though this collection has been curated from decades of experience and distilled down from thousands of other books, I’m not sure what anyone would learn about me by reading their titles or even reading their content. Like the art on Janis’ wall, they need a story. I used to believe the stories in the books reveal something about me, but I don’t think that’s true anymore. First, there are too many.

This gave me an idea for another project. List the exact short stories that would reveal the most about how I felt about this life. Here are three, “The Star Pit” by Samuel R. Delany, “A Rose for Ecclesiastes” by Roger Zelazny, and “Flowers for Algernon” by Daniel Keyes.

Before everything went digital I loved judging people by their books, albums, and movies they owned. I remember once going to William Faulkner’s house and looking at all his books, and I imagined a chunk of his personality was left in those bookcases. Like my Mom, this is how I used to want to be remembered after I died — even though I’m quite confident that a few weeks after my passing Susan would call up Salvation Army and have them haul it all away. And that’s the right thing to do.

By the way, this is how I remembered my mother on what would have been her 100th birthday. My father would have turned 100 in October and I plan to write my memories of him then. In both cases, I’m not sure I can ever know who my parents were. The possessions they left gave no real clues, and I now imagine they could be misleading in countless ways. It’s a shame they weren’t bloggers. That’s about the best way I could imagine for knowing who they were after they died. I wish all my friends were bloggers. They could at least post photos of what they own and give their stories.

I should give up guessing about people from their possessions (but I probably won’t). However, I am going to ask for more stories.

3 thoughts on “Do Your Possessions Reflect Your Personality?”