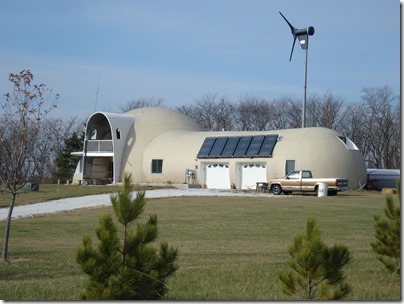 Every evening on the nightly news we see natural disasters destroying homes, towns and even cities. It’s completely obvious to all but a few that climate change is happening. Is it possible to create a way of life that is hardened against most of what mother nature can throw at us?

When I grew up in Miami back in the 1950s and 1960s we lived in concrete block houses built on top of poured terrazzo foundations, with roofs made with another poured material that had pebbles embedded in it. No wolf could blow it down. After a hurricane we’d go outside and see knocked down trees, small manufactured stuff blown about, and some houses might have a window bashed in, but the little concrete block houses stood like bunkers.

Is it time to stop building wood frame homes? Is it time to stop building roofs that need to be replaced every twenty years or blow off in a big wind? Isn’t it time we build electrical power grids with independent home energy systems with backups? Last week 67,842 homes lost power here from a so-so storm system. My power was off for a few hours, but I knew people who lost it for a day or two, and read about others having to wait 4-5 days.

If houses had battery systems like Tesla is designing, they could handle short power outages. Throw in generators that can kick in based on natural gas, and homes can withstand long outages. But the real long-term solution is to build homes with solar/wind generators so every dwelling is part of the energy grid. If we put all power lines under ground that would further secure the power system. Can you imagine cities without power poles? For years new neighborhoods have done this, but we should retrofit older subdivisions. The reason most of those homes lost power here last week was because of downed lines from falling branches and trees.

What if we designed homes to be continuously in-place upgradable? Could we design a house that can withstand anything nature can throw at it, be useable for a thousand years, and still be adaptable to new technology as its invented? Are single homes on small plots the most efficient design for maximum human happiness? What if four homes were push together but the families shared one big yard? Homes that can withstand natural disasters can also be very soundproof. They can also be made burglar proof too. If they shared some infrastructure such designs could save on building costs. If land use was optimized, shared gardens, swimming pools, and playgrounds would be more practical.

We could design dwellings that could withstand extreme temperatures that used little central power, and could survive for time periods without taking power from the grid.

For some reason post-apocalyptic stories are very popular today at the movies, on television and in books. We could design energy self-sufficient housing that can withstand nature and the collapse of civilization. With better land utilization, and advanced techniques for gardening and animal husbandry, it would also be possible to make for self-sufficient neighborhoods. If we combined the philosophy of Mother Earth News, Make Magazine and Wired Magazine, we could reinvent the subdivision to combine the past and future into a more secure way of life.

In recent times many people have become preppers, hoarding food, water and AR-15s to prepare for the collapse of civilization. In all their scenarios the strong kill the weak to survive. We know what happens when civilization disappears—just watch the news covering Syria, Iraq, Afghanistan and Yemen. Survivors tend to be refuges, not preppers. Wouldn’t it be better if we design a more sturdy civilization. Does anyone want live under rule by AR-15/AK-47 owners?

If you search the internet on this topic you’ll find lots of sites describing people already working on inventing what I’m speculating. During the 2016 presidential elections we need to stop dwelling on how to return to the past, but think about how to design the future. Demanding a smaller government, less taxes and an every man for themselves way of life isn’t very imaginative—or positive.