Listeners of Rdio, Spotify, Rhapsody, MOG and other subscription music services get to hear hundreds of new albums every Tuesday.  I’ve already tried six or seven new albums while eating my morning Quaker Squares.  I use Rdio, and on Tuesday when new albums are released I hit the New Releases button and see a scrolling parading of new albums marching by, in rows of five at a time.  I roll the wheel on my mouse and they just keep on coming, row after row, of new albums.  I don’t have time to listen to them all, or even a tiny fraction of them.  I just have to click the mouse to play – almost no effort at all.  What’s hard is finding a song that makes me want to play the whole album.

Now here’s the thing:  The first song is everything.  If you don’t grab me with the first song I just click on another album.

In the old days, when we bought LPs or CDs at the store, often we bought them because it already had a hit song on it, or it was a band we liked.  Spending the money on an album meant you were willing to take the time to listen to all the songs, and the song order didn’t matter.  I’m just not willing to spend time on whole albums anymore when I have access to so many.

I’m quite anxious to give an unknown album a chance, especially if it has a cool cover, clever title, or interesting band name.  Those are the initial impressions that catch my eye.  Those three factors decide whether I hit the Play button.  What keeps me playing is my impression of that first song.  If I like the first song, even moderately, and especially if I think it’s new and different in a creative way, or has a distinctive vocalist, or addictive music, I’ll play the whole album hoping to find a great song.  That’s what I’m looking for, a great song I’ll add to my playlists.

It’s obvious most of the time when I don’t like a song.  What’s disappointing is to play a new album and the first song sounds good, but feels like too many other good songs.  I’ll agonize awhile, hoping the music will get beyond the cliché, but all too often I give these songs the hook as fast the the songs I immediately dislike.  When you’re wadding through 17 million songs you just don’t have time to waste.

Tonight, for instance the song “Tickle” from What You Want by Eyes Lips Eyes started off with a nice instrumental that grabbed me, so I added it to my Under Consideration playlist.  It’s not great, but it showed enough promise to listen to more.

I liked “Tickle” enough to try all four songs from the EP.  It’s growing on me.  But I’ve got to admit if any of the other three songs had been first, I’d would have gone on to the next album. 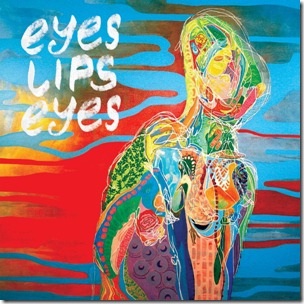 The next album to catch my attention was another EP of five songs, The Colour Age by Red Ink.  “Empty Town” had a nice 80s pop feel too it, and I liked the vocalist.  I almost didn’t give it a try because the cover is bland, the title dull and the group name gives off a negative vibe, but I did, and it’s a decent album.  I like all the songs, but don’t know if any merit going on a playlist, although “Promise” had a nice emotional feel to the vocal.  I added the album to my Collection, and put it the Queue to play again later.  [I did add it to my main playlist. “Promise” should have been cut 1.]

Now, “Cheek Mountain” piqued my musical taste buds immediately.  It’s from a group Cheek Mountain Thief with a self-titled album.  I liked the first song enough to put the album in my Queue to play later as background music.  The songs are on the moody side, so I need a moody moment to give it a good listening.  But that first song earned it a further play.

How could I not play an album by a group named The Dirty Gov’nahs?  And I liked the title too, Somewhere Beneath These Southern Skies.  The first song, “Can You Feel It” grabbed me.  The music and vocals reminded me a bit of Kings of Leon.  The first song got the album on the Queue for playing later, but the opening guitar of the second song, “Don’t Give Up On Me” got the album added to my Collection.  Playing on through album makes me wonder if I like it well enough to buy a CD copy.  It has a big rock sound, not quite old Southern Rock, maybe a bit like later Rolling Stones kind of beat.

The Dirty Guv’nahs are the kind of band I like discovering on subscription music.  So far the album only has 482 plays, but it sounds good enough to expect it will catch a lot more attention.  I put “Temptation” on my main playlist.

The vocals of The Dahls grabbed me right away for “Josephine,” the first song on their album midnight picnic.  Country music with a twinge of folk, or maybe vice versa, with a dash of witchy music.  These two girl singers sound nice enough to add their album to the play later Queue.

Now this is just five albums to play after scrolling past over a hundred albums attempting to catch my attention.  It’s work to find an album I’m willing to listen to all the way through.  And the odds are I won’t keep playing these albums.  I only find about one album a month that I really love.  The best I’ve found in the last couple months has been Our Version of Events by Emeli Sandé.