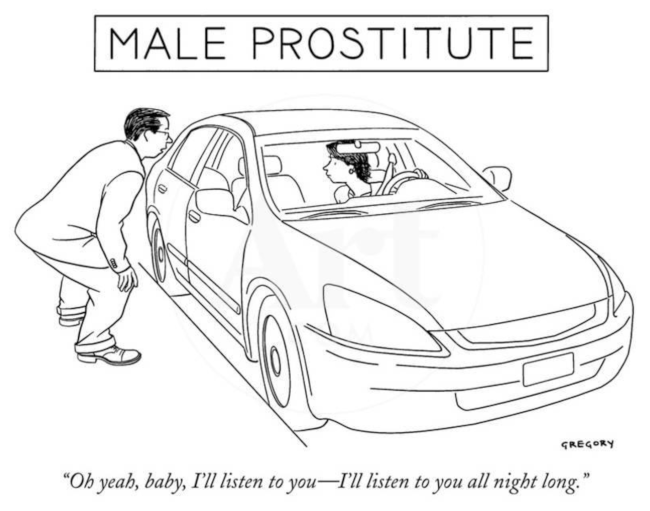 I told my wife I was going to put this cartoon on my Facebook page and she said I shouldn’t because it might be considered sexist. It’s a cartoon by Alex Gregory whose work appears exclusively in the New Yorker. You can read an interesting bio of Gregory and a description of his work methods at A Case of Pencils, a blog devoted to New Yorker cartoonists.

I didn’t post the cartoon on Facebook because I’m now worried it could be sexist, but I wasn’t sure either. I asked a few women friends and some said it was okay and some weren’t sure. None took offense. So I went looking for definitions to “sexist” online. I was surprised by how many different definitions I found.

By studying these definitions I might need a Supreme Court ruling to know if this cartoon is sexist or not. Part of the humor of this cartoon is it plays around with all of these issues. It assumes the stereotype that men are usually in the car and women are looking in the window. Just reversing roles is funny. If the man wore hotpants and the woman a suit, it would be a different kind of funny even without a caption. The cartoon is making generalizations about men and women behaviors, but are those generalizations negative? Is it an absolute generalization? Few people are prostitutes or hire them, so maybe it’s making no absolute assessments about either gender. However, many people, including myself, see prostitutes as victims of a sexist society.

I think the first thing we should ask: Does it offend anyone? Now I can’t answer that because I don’t know how all seven-plus billion people on Earth think. The next question: Could it offend anyone? And this is my present quandary. I don’t want to offend anyone, nor do I want to be perceived as sexist. The prudent solution: never generalize about gender. I shouldn’t be writing this essay and I shouldn’t post anything on Facebook that could ever be construed as dealing with gender differences.

I feel sorry for comedians, humorists, and cartoonists. This morning I read “These 13 Jokes From ‘Seinfeld’ Are Super Offensive Now.” I have to admit I thought them funny back in the nineties. So much of humor is observational generalizations.

But here’s the thing, almost everyone along the gender spectrum likes to occasionally generalize about others on the spectrum. This cartoon is funny to some people because it makes observations that coincide with their personal observations. We have a natural ability for organizing patterns into behavioral traits. We see certain kinds of clouds and we think it’s going to rain. We see certain prices on a menu and decide a restaurant is expensive. We see a movie preview with a superhero and we assume it’s based on a comic book. All of these can be false assumptions, so this ability creates a lot of prejudices.

Cartoons about prostitution generally involve men who can’t get laid paying women for sex. Should men consider such cartoons as demeaning to them? I would never use a prostitute. Should I be offended by the possible suggestion that all men would? Or will some women be offended at the suggestion that some women would be willing to pay to be heard? And will psychiatrists feel offended if they think their profession is a kind of prostitution?

I would guess that many women would say they know plenty of men who are poor listeners so the idea of paying a man to be attentive to their conservation all night long could be funny. Is that an insult to men? I know plenty of men who complain about having to listen to their wives and girlfriends, so this cartoon should be funny to them, but will it offend women in general? The reason why I even have this cartoon is one of my male friends thought it insightful because he feels his girlfriends talk too much. I thought it funny because so many women I know seem to like me because I’m willing to listen. I thought I could be that guy in the cartoon.

Maybe the humor is even simpler. Maybe its saying men want sex and women want conversation. Many married couples might agree, but does a portion of the population seeing humorous validity mean its not offensive to couples where the woman wants sex and the man conversation?

And where’s the inequality? Is it offensive to desire talk more than sex?

But you never know what words will do. For example, when I wanted a copy of this cartoon I searched on Google for “Male Prostitute” and selected the Images tab. I got copies of the cartoon but I also got mug shots of male prostitutes. It didn’t even occur to me what those words could also bring up. That’s the thing about worrying about offending, we never know the full consequences of words.

(Now I worry about what kind of ads I’ll be seeing in the next few days.)

6 thoughts on “Is This Cartoon Sexist?”