String theory must be in trouble if Sheldon Cooper, a fictional character from the popular TV series, The Big Bang Theory, decides to give up working on the theory after twenty years of dedicated effort. String theory is an elegant mathematical theory that seeks to explain how the Standard Model unites with the  quantum theory of gravity. In recent years string theory has come under attack because its not falsifiable, implying it’s not scientific. This is quite controversial. But don’t worry, string theorists are far from packing it in, see the new book Why String Theory? by Joseph Conlon. 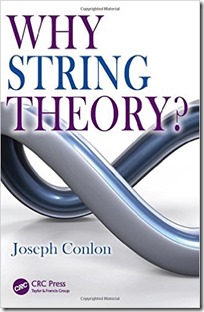 I think these science wars defining the scope of science are a good analogy for what’s going on in science fiction. Many, if not most, science fiction fans want to believe the future holds unlimited possibilities, and science and technology will eventually create everything we can imagine. For some deep psychological reason, most science fiction readers do not want to believe our species has limitations. They hate the idea that faster-than-light travel might not be possible. And are horrified at the suggestion that colonizing the galaxy might be an unrealistic pipedream. Let’s face it, true believers of science fiction want Star Wars or Star Trek to become humanity’s future. They passionately cling to Arthur C. Clarke’s First Law: “When a distinguished but elderly scientist states that something is possible, he is almost certainly right. When he states that something is impossible, he is very probably wrong.” In other words, they want to believe nothing is impossible.

What if science does discover we have limitations? What if we reach the limits of what we can observe or infer by all our extended senses of technology? What if we can’t build machines that can test string theory? Or find clues to prove the existence of the multiverse? As long as we know we can’t go further, we can assume that we can, and science fiction has hope. But what if science conclusively finds the boundaries of our existence? Should science fiction stay within those boundaries? Aren’t stories outside those boundaries called fantasy? I believe Kim Stanley Robinson’s 2015 novel Aurora explores these very questions.

Shouldn’t science fiction be about the possibilities of science? Aren’t we really wanting to believe the inverse of Clarke’s Third Law: “Any sufficiently advanced technology is indistinguishable from magic” – that magic is just technology we don’t understand? Isn’t that how God created Earth in The Book of Genesis? I’m afraid most fans of science, even beyond the science fiction fans, are hoping that science will magically make anything we want happen. 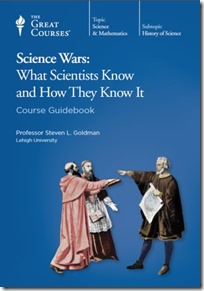 Few people understand the limitations of science. I highly recommend one of The Great Courses from the Teaching Company called, Science Wars: What Scientists Know and How They Know It by Professor Steven L. Goldman. (Just one credit at Audible.com.) Goldman starts with Plato and Aristotle and takes us through the centuries showing how scientific thought emerged in natural philosophy and then science. Science is far more complicated than the Scientific Method. Science cannot state absolute facts in the philosophical sense of explaining the Truth of Reality. Current scientific theories are our best statistical explanations for what we experience. Theories are always supplanted by newer theories. Newtonian physics was excellent at explaining reality in the 17th century, but Einstein explains reality better in the 20th century. Is Newton wrong for not seeing what Einstein did? Will Einstein be wrong when someone comes up with a better theory?

One of our limitations is we never get to know. We only get to know the best explanations we have at the moment, and most people’s working knowledge is based on theories hundreds of years out of date. Any fundamentalist Christian is working with a 2,000 year old model of reality. If you don’t know the new theories, the old ones feel perfectly good. And aren’t most science fiction readers hoping for the future based on theories long out of date?

Basically string theory was getting too far ahead of science. String theory is like the concept of galactic civilizations in science fiction, it just sounds so good, that we insist it must be true.

But here’s the kicker. If we don’t want to live in fantasyland, we have to stick with the current best theories that are falsifiable. Religion and most of philosophy aren’t, and look where they’ve taken us.

I lean towards believing science will eventually show us our limits. One limitation that’s under examination by science philosophers is whether or not we can examine reality without our subjective bias. That understanding is limited to our perceptions and how our brain works, and that will always color what we discover. I wonder, when we invent machines that think, if they will discover aspects of reality that we can’t see because of this limitation? And if they do, can they report it to us. Right now whatever we see with the telescope comes through the limits of our perceptions. What if we invent a telescope that can see for itself. Can we ask it: Are you seeing the same reality we do? Can you see things we don’t?

It might turn out that humans will never discern strings, but our machines will. Can science determine that? Or is even that only possible within the realm of science fiction? If you pay attention to reality, we live with endless limitations now. There is no reason to believe that our species has no limitations. There’s no reason to believe science is unlimited. I think it helps us to know what is falsifiable by science, and even expect science fiction to work with those limitations. Isn’t that what distinguishes it from fantasy?