Last night I signed up for the 7-day free trial of CBS All Access to see the second episode of the new Star Trek Discovery. I’ve been meaning to give CBS All Access a try, and this was a good time. However, I canceled today. Although I thought the production values of the new Star Trek series were the best yet, equal to the latest ST films, I just didn’t want to watch a limited series about the war with Klingons. Nor did I want to subscribe to a premium streaming service with commercials. And it annoyed me that we’d only see four episodes this year, and then have to wait to watch the rest next year.

Amazon just announced their Amazon Fire TV with a quad processor and 2GB of memory.  Since my Roku 3 only has a dual processor and 512MB of memory, I’m wondering if I should put a Amazon Fire TV in my Amazon cart.  The Amazon Fire TV also ups the Roku 3 with gaming, offering far more games than the Roku, or the Apple TV, plus it can use an option game controller.  See list of games and apps here.  I’m not really a gamer, but it’s a consideration.  My wife plays games on her laptop, so she might like it.  I need to see more gamer reviews before I spend $99 dollars to try it out.  But it’s a big advantage point for Amazon. 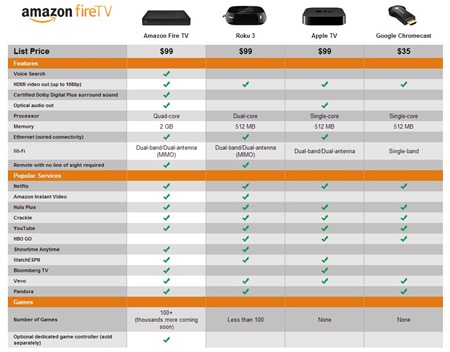 What really tempts me is the tech specs.  My Roku 3 has trouble streaming certain channels in primetime.  Now, this is most of all a problem with the Internet, and maybe even Net Neutrality, and not the Roku.  All of these devices are heavily depended on the speed of your Internet connection.  Recently upgrading to the Roku 3 did show that more CPU power does help, and more memory will too.  The Amazon Fire TV has a quad processor and 4X the memory.

Netflix streams fine anytime on my Roku 3.  But HBOGO and Warner Archive Instant both will crap out in primetime, frequently going to the reloading screen.  In the daytime, I get a HD signal with fast start ups and no stopping, but in Primetime, especially on the weekend, things don’t work as well.  I just wondered if the Amazon Fire TV with 2GB of memory could buffer that problem.  I’m not quite ready to order an Amazon Fire TV to find out, but I’m awful curious.  I don’t want to jump in right away, and because Warner Archive Instant and HBOGO are not listed for the Amazon Fire TV at the moment.

By the way, my streaming problem didn’t happen until a couple of months ago.  I’ve wondered if its because more people than ever are using streaming TV services, or has Net Neutrality issues popped up?  The quality of the TV picture on these devices is directly related to your Internet throughput.  But content can be interrupted by overwhelmed servers at the provider site, just like the Obamacare servers.  So I wouldn’t buy one of these devices unless you had at least 6 Mbps or better Internet.   Try Speedtest.net to check your speed.  Make sure you click the Begin Test and not any of the other buttons that trick you into buying stuff.  I got a 19.60 Mbps for download, and I still have problems on weekend nights.  I don’t think it’s the Roku or my Internet, but the content provider servers and peering deals.  Netflix pays its peering partners, so they get good throughput.

The big hold back – will Amazon Fire TV have all my favorite Roku channels?  One of many reasons why the Roku is superior to the Apple TV is the vast away of channels.  And the poor pathetic Google Chromecast is really a no show.  I didn’t send my Chromecast back, because my wife thinks she might have a use for it, but I haven’t found one yet.  To me, it was a one horse race until Amazon showed up.

My fear is Amazon Fire TV will be like the Apple TV, mainly gearing its content to what Amazon sells.  The Roku has over a thousand channels, and their numbers are growing fast.  They have Rdio and Spotify, which apparently Amazon and Apple do not.  Sure, most of those channels are crappy, but it does offer a tremendous variety, and crap is in the eye of the beholder.

I don’t have cable TV and I don’t miss it because of my Roku 3.  Right now, it would be a step back in terms of streaming content, to switch to the Amazon Fire TV.  Over the years I’ve convinced many friends to try the Roku and they’ve all been very happy.  Some have even given up cable TV too.  I know a few people with Apple TV, and I’ve set up one for a friend, and it just hasn’t impressed me.  Because my Mac friends haven’t gushed about their Apple TV I assume it was ho-hum.  Even the guys at Mac Power Users podcast seem to prefer the Roku.

I’m on my third Roku.  My first generation went to a friend who is still using it, and my second generation went to my wife’s apartment.  It’s going to be hard for me to switch, but not impossible.  I like new gadgets.  It’s still too early to run and buy an Amazon Fire TV.  I think I’ll at least wait until the Roku 4 comes out.

Which makes me ask:  How far can these internet TV boxes evolve?  The competition is obviously heating up.  What’s weird, is over the air broadcasting is heating up too, with new channels popping up from time to time.  Now, with internet TV, the competition to cut the cable TV cord is getting intense.

The one thing that cable TV has that most won’t give up is the DVR.  Internet TV could completely invalidate both broadcast and cable TV because it’s not time bound.  A Roku 3, Amazon Fire TV or Apple TV  do not have a DVR, but their channels work just like everything was already DVRed.  Instead of watching shows live over the air, I can watch them later on Hulu Plus or the PBS Channel on Roku.  So Internet TV boxes could be the wave of the future except for one thing – live sports.  Since I have no interest in sports, I’m good to go.  But I always warn people who ask me about the Roku, is if they love sports.  If they do, cable TV is still their meal ticket.

I’m mighty impressed with the Apple Fire TV specs and rollout.  I’m very tempted to buy one.  Susan has a Kindle Fire.  We are Amazon Prime users.  I keep my MP3 music at Amazon Cloud Music.  The world is dividing into Android v. iOS users, and in particularly, Amazon v. Apple as content providers.  The Amazon Fire TV runs on a customized Android OS.  Is there room for the Roku?

Here’s where the Roku has to go up to the plate and hit a few more homers to prove itself.  There’s still plenty of room to innovate.  Take the Rdio channel.  It’s bare bones.  Now the channels are created by the content providers, but Roku should help them improve with programming tool kits and standards.  I’ve even considered switching to Spotify because the Spotify Channel is better on the Roku.  However, I prefer Rdio’s software on the iOS and web.  Warner Instant Archive recently did an overhaul of their interface, but in many ways it was a step down.  The new look is slicker, but hides the content.  The apps on these devices are all still rather primitive.  Apple which is legendary for its Mac UI, falls down on the UI for it’s TV box.

Amazon gives their users voice search at the remote, which is a huge jump forward because typing in movie titles or actor names is tedious on the other streaming TV players.  Of course, Roku gives their users a headphone jack at the remote which is a very useful option.  I expect these devices to find plenty of ways to innovate and compete in the future.  I know most iPhone and iPad users assume they need to get Apple TV, but they really should consider the Roku or Amazon Fire TV.  It’s still too early to be locked in, especially at $99.

If you don’t already own a streaming Internet TV box, the choice now will be very hard to make.  I think Amazon wins on tech spec and slickness, Roku on content, and Apple for dedicated iOS users.  Because Amazon is an 8 million pound gorilla, and because Roku is not a household name, I’d bet that Fire TV will succeed like the Kindle Fire.