Today we like each other by clicking a Facebook icon and share by inviting others to view images and videos that trigger our strong emotions. Oh, we still share by getting together for an activity or like each other with hugs and kisses, but it seems less often, doesn’t it?

In David Brooks’ latest column at The New York Times he says:

In primitive societies, whole groups would live in one big room. Over time families moved into their own separate dwellings, but often were multigenerational. Then we invented the nuclear family. And now people often live alone in apartments. We connect by computers to create virtual social bonds. It’s kind of weird when you think about it.

This also reminds of the classic 1909 science fiction story by E. M. Forster called “The Machine Stops.” Eighty years before the WWW Forster imagined humans ultimately living alone in rooms connected to each other by a machine. Read this story, it will amaze you.

These trends sound like a sad progression of human evolution, but I believe there are reasons why we’ve chosen our paths. Primitive people worked together with a common goal of survival. Everyone had to contribute. The same was true to a lesser degree during the era of multigenerational families. Even during the early era of nuclear families, we had much to keep us together. But once everyone had a different job that took them into a different direction, and we developed our own personal interests and goals, things came apart. Even as late as the 1950s and 1960s families still had a lot of shared experiences. With only one television parents and kids would gather around it in the evenings. They ate their dinners together while watching Ed Sullivan or Lassie. Kids would go to school, and parents would go to work, but they still found countless shared interests to spend time together.

What separated me from my family in 1962 was a clock radio. But also my father worked two jobs and my mother one, so they disappeared for most of the day. Yet, when they were home, I began retreating to my room to listen to Top 40 Rock ‘n’ Roll and reading science fiction while they watched The Beverly Hillbillies with my sister.

Brooks dates our divergence with the computer, but I think it came earlier with other technologies. When I got that clock radio and my sister got a portable record player we went our different ways. By the 1970s many families had multiple television sets, so each family member took to their separate rooms to watch only what they loved. We stopped making the effort to sit through shows other people loved. In the 1980s personal computers came out and we divided again. Walkmans, MP3 players, audiobooks, tablets, smartphones, they’ve all given us ways to isolate ourselves into pursing highly unique art forms. 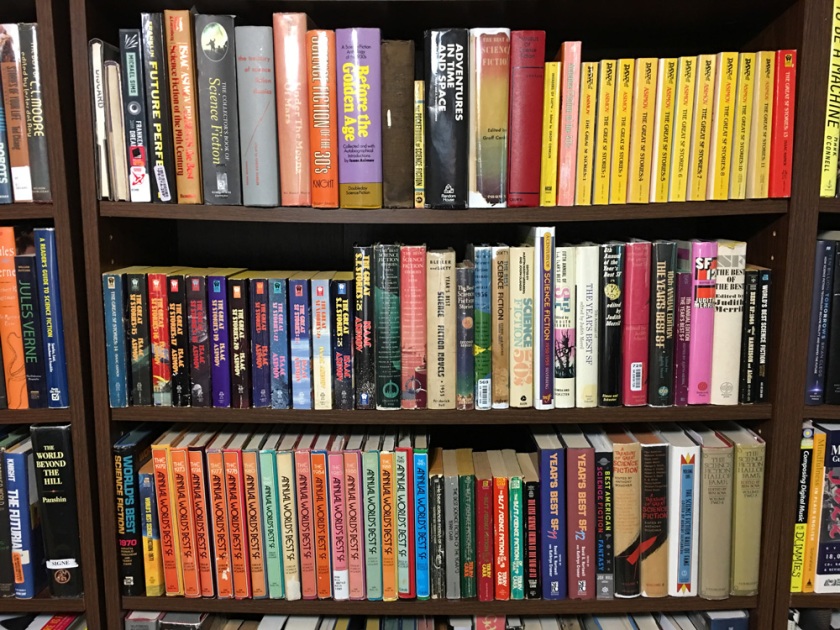 Think about all the interests and hobbies that only you love. Above is a photo of what currently separates me from other people. My fascination with reading old science fiction short stories and studying their history culls me off from the rest of humanity. By Brooks’ distinction, I’m defined by both print and digital technologies, but I also love hearing these stories read by professional narrators, so that connects me with an oral tradition too. But when I listen, I’m wearing headphones that shut me off from the rest of reality, although I’d love to know someone who’d like to listen to the stories with me.

When Susan, my wife comes home from work we sometimes eat together, and sometimes not. We faithfully watch the NBC Nightly News and Jeopardy that we recorded on our TiVo, and then she goes to the living room to watch her shows and I stay in the den to watch mine. We got married in 1978, and through 2008, we had one television set, and we’d watched the same shows together every night.

In 2008 Susan took a job out of town, and for ten years we watched television separately and we learned exactly the kind of TV that resonated with our personalities. I developed a number of friends who came over to watch TV with me, and I learned that friendship was a VENN diagram of shared TV shows. No two people have exact tastes. When Susan moved back permanently last year she brought her own TV, so we had two. We also had two Rokus, and subscriptions to several streaming TV services that allowed us to watch exactly what we want to watch when we wanted to watch. We had also learned to binge-watch different kinds of shows. Taste in TV now separates us.

We do find other ways to share. We’ve been doing game nights with friends. Last night was a game night, and the four of us all talked about the TV shows we watched. It was kind of funny because our tastes overlapped in various combinations. If I wanted companionship to watch my TV shows, I might need to call a dozen different people, and some nights I’d still be watching TV alone.

When TV was broadcast, most of my friends watched the same shows. Now with over 500 scripted TV shows being produced every year, friends connect by the few unique shows we each share a love to watch. And I often feel I disappoint people when I tell them I don’t like the shows they love. It was damn surprising how much The Game of Thrones united people.

I really enjoy having friends over to watch shows together, but that seldom happens anymore. For ten years my TV buddy Janis and I shared a love of several shows and we’d get together and watch them 3-4 times a week. But Janis has moved to Mexico, and most of my other friends don’t want to come over to watch TV that regularly.

I have a handful of internet friends who also love the old science fiction anthologies, and we have a group email address we use to discuss them. I’m also in two online book clubs where we discuss books daily by email. I guess these replace my water cooler friends from my work days.

Facebook is constantly attacked in the news nowadays, but it’s a very useful tool for keeping up with family and friends. Knowing that someone else likes the same cat videos as I do is nice. Not much of a bond, but at least it’s a shared affinity. What really bonds people is raising a family or a career that forces you to work intimately with other people. Susan and I never had kids, and my work days are over. My friend Mike and I work on a computer/web project together, and that’s a great way to connect.

It’s funny, but I think the single thing that brings me and my friends together now is our collective worry about getting old, and our constant talk of bodily functions. Nothing bonds aging baby boomers like a conversation about constipation.

Lately, I’ve wondered about retirement villages. Would moving to a 55+ community would create new kinds of social bonds? I’ve wondered if it would create the social structures I had back in my K-12 years. Would playing Pickleball and Four Square everyday undo all the specialized isolation that TV and computers created? Who knows, maybe I could find other people to watch Perry Mason, or even share a love of 1950s science fiction like these guys: