I hope this doesn’t reveal some sort of deep embarrassing Freudian complex, but my whole sleep last night was filled with dinosaur dreams.  Ever since I was about five years old I’ve had occasional dreams about dinosaurs.  They aren’t real common, but they happen now and then, and they vary in details.  Last night’s dreams was somewhat typical.  I’ll be with a bunch of other people, at home, school, work, outside in a city location, on a crosswalk, etc., and suddenly a dinosaur or dinosaurs would show up and everyone panics. 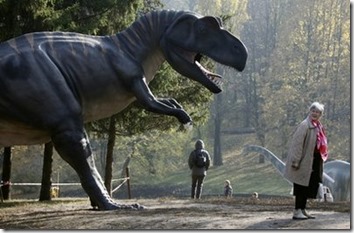 In the dream we all know the way to avoid being eaten is to be lie down, don’t move and be quiet.  But there’s always someone nearby that keeps blabbing or moving around that draws attention to the dinosaurs causing me to fear for my safety and makes me very annoyed at the noise maker.   For some reason the dinosaurs won’t notice us if we don’t move or make noise.  I never get eaten myself, or the people I know, but I’m always afraid some dumbass is going to get me, or us, killed.  I’m always annoyed in these dreams that other people are not freezing and shutting up.

The funny thing is I had these dreams all night long.  Even after I got up and went to pee, and went back to sleep.  Even very early in the morning when I was waking up over and over again, every time wondering if I should get up.  Each time I fell back asleep I had another dinosaur dream.  It was one scene after another, with different groups of people, in different locations, and in each scene there was a dinosaur attack.  One scene involved my sister, and another my wife Susan, but it was always strangers causing trouble.  I don’t think I ever saw a dinosaur eat someone, but I knew they were in the distance, so the panic to hide was strong.  These dreams last night weren’t quite nightmares, but they did involved a kind of anxiety.

If dreams are sorting through the days events and filing long term memories, what did I do yesterday to deserve dinosaurs dreams last night?  And do other people have dinosaur dreams?  I hope these dreams don’t indicate some kind of weird psychological disorder.

When I was young, I guess around five, I had my first dinosaur dream.  I lived out in the country in South Carolina in a old two-story house.  My family didn’t use the second story, but my three-year-old sister and I would go up there to play, but it was creepy.  I would dream about those upstairs rooms as if they were evil.  That was one of my earliest reoccurring dreams, along with dreams of flying.  But it was during this time that I had my first dinosaur dream.  I, and other people were working in this huge gravel pit, and we were slaves to dinosaurs, and had to stand in dinosaur shit as we worked.  Later on, when I saw The Flintstones, the pit we worked in reminded me of this show.  But this dreams was three or four years before The Flintstones appeared in 1960.

I’ve written about dinosaur dreams before, back in 2008.  I had completely forgotten I had written this, and the dream I described.  The dream back then was somewhat different, a more science fictional version, because people were protected from the dinosaurs by force fields.

To see a dinosaur in your dream symbolizes an outdated attitude. You may need to discard your old ways of thinking and habits.

I wonder if I have a problem with outdated attitudes?  But this commentary seems no more scientific than astrology.  I am not the only person troubled with dinosaur dreams as reflected in the Yahoo Answers column.  It’s odd, but a couple of people who replied copied the statement I quote above, and it’s repeated on other web sites.  Just shows how bullshit spreads across the internet.  At least at the Dream Dictionary they had something a bit deeper, but still on the woo-woo side.  It reassures me that other people have dinosaur dreams, so I ain’t the only crazy one here.  In fact, there are many dream interpretation sites that cover dinosaurs in dreams, and many people posting about dreaming of dinosaurs.  At Jurassic World they even have a page collecting dinosaur dreams.

Are dreams even symbolic?  I have no idea.  It seems my dreams are saying something very big will destroy me if I stand out, and that other people are constantly being destroyed for making themselves known.  Hunkering down and being quiet sounds rather cowardly to me in waking life.  When I was young and had nightmares I used to kill anything that tried to hurt me.  The violence of my dreams was disturbing because it was like the violence of modern video games, but these dreams were decades before such games were invented.

I can’t think of anything I did or experienced yesterday that would trigger dreams about avoiding death, or large issues.  I had a nice quiet day of reading books and listening to music, and then last night my friend Anne came over for dinner and we watched Empire Falls, an old HBO mini-series based on the Richard Russo book.  Empire Falls is about a man with a repressed past that never speaks his mind.  I did identify with Miles Roby, the Ed Harris character, because I hold things in to avoid emotional conflicts.  Are the dinosaurs of my dreams potential emotional conflicts?  At least this theory works with the dreams because the way to be safe in the dream is to be quiet and avoid attention.  Also, the people who get eaten by dinosaurs are the loud people who won’t shut up.

This is embarrassing, because now I am revealing something.

I guess I’ve got to wait for the dinosaurs to show up.

86 thoughts on “Do You Dream About Dinosaur Attacks?”