I know technofrustration isn’t a real word but it should be. In the last twenty-four hours I’ve had two aggravating experiences with technology. First, my Windows Media Center stopped retrieving data for it’s television guide, and second, my new version of Windows 10 stopped working with the new version of iTunes when it comes to downloading Audible.com books. Both issues I believe are due to orphaned technology. Microsoft doesn’t want to support Windows Media Center anymore, and Audible probably doesn’t want to support desktops anymore. Before smartphones, Audible users would download audiobooks to their desktop and then copy them to iPod/MP3 players. I’ve been using an ancient iPod Nano for my audiobook listening because it’s much lighter than my iPhone for carrying around in my shirt pocket. 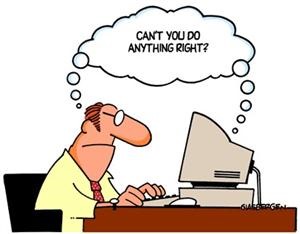 Microsoft wants to be out of the media center business, and I guess Audible wants to shift it’s audiobook delivery system to mobile devices. In other words, I want to keep doing things the old way, and I’m being frustrated in my efforts. I’m sure it’s very expensive for corporations to support legacy systems for the old farts who don’t want to keep up with the times. I wonder how many old techno foot draggers there are out there like me?

I only recently switched back to using an iPod Nano. It’s much easier to download an audiobook on my iPhone, but it’s a delight to just carry around a Nano. I was even shopping on eBay to find a 7th generation iPod Nano to buy to replace my ancient 2nd generation device. However, this morning downloading books to my old Nano stopped working, and after several software reinstalls I still can’t get it working. It might not be practical to go back to the old Nano technology. Many pundits figured Apple would never release an 8th generation Nano, but they did, so I figure I’m not the only audiobook listener who wants to travel light.

Part of my frustration is due to working with a prerelease version of Windows 10. When I talked with Audible’s tech support they didn’t seem to have scripts that covered Windows 10. What’s really hurting is not being able to record TV shows with Windows Media Center. Supposedly Microsoft contracted a different company to supply the guide data and some users aren’t getting the updates to the system.

I have to decide if it’s time to give up on my Windows Media Center PC and my old iPods. To avoid frustration I’m being herded towards using my Roku box and iPhone instead. I happen to have those devices—but what about all the people who don’t? Another way to avoid technofrustration is to give up on technology. I could just read books instead of watching TV or listening to audiobooks.

I wonder if the Amish are a tribe of people who suffered too much technofrustration in the 19th century?