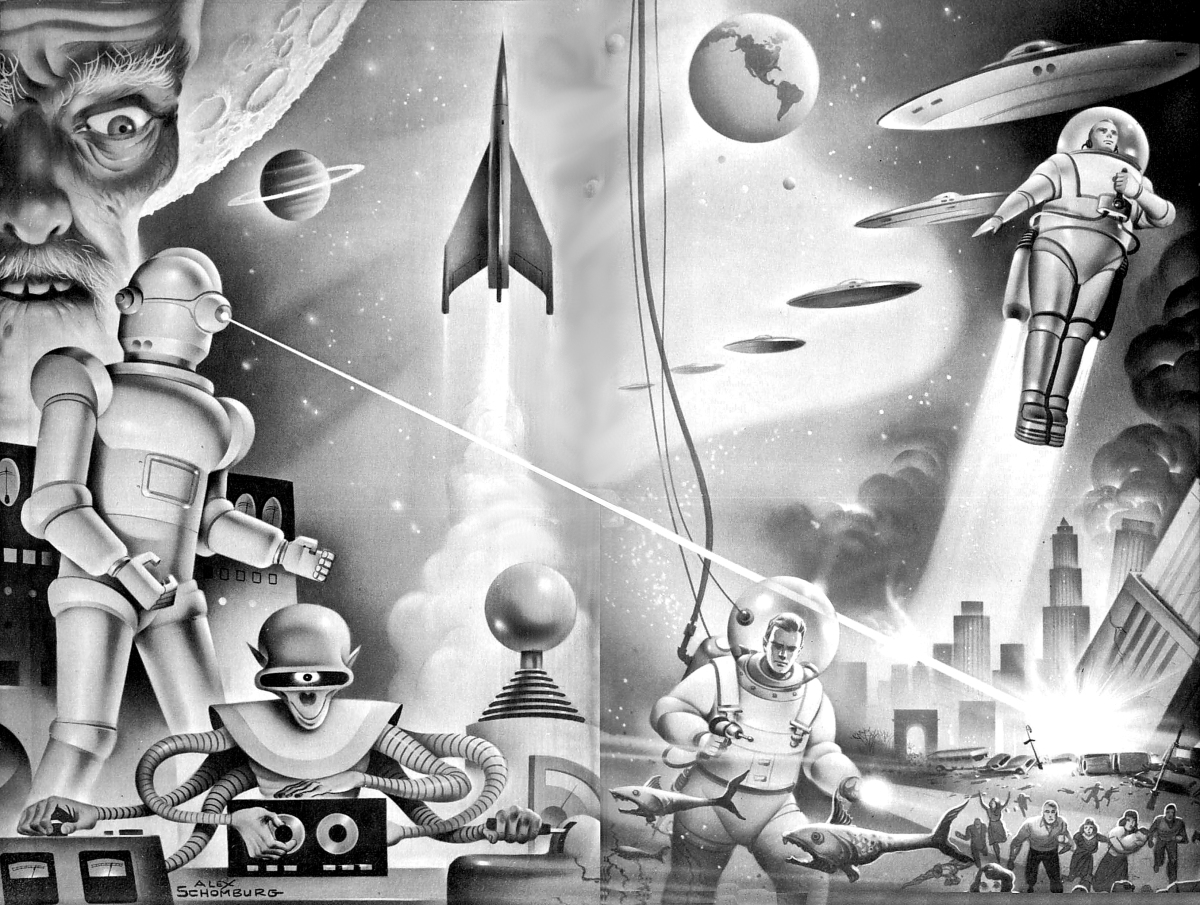 One reason I haven’t been posting much here lately is because I’m writing a short story review every other day on my science fiction site. I’m reviewing The Big Book of Science Fiction, an anthology of over a hundred science fiction stories from the 20th century, including many stories I’ve read over the past sixty years. The whole endeavor is a kind of self-psychoanalysis of a lifetime addiction to science fiction.

I’m slowly realizing what science fiction means to me. In 1960, I became a bookworm in the 4th grade to cope with the stress of growing up. In the 5th and 6th grades I slowly focused that addiction on science fiction. A couple decades ago I realized I had substituted belief in science fictional ideas for my childhood beliefs religion, becoming an atheist around age 12 or 13. But actual space exploration played a part too. Sputnik went up weeks after I began the first grade, and Apollo 11 landed on the Moon weeks after I graduated high school.

When I first started reading science fiction in the early 1960s I knew no one else that read it too. Then in March, 1967 I met my buddy Connell in 10th grade who became my lifelong friend. When I discovered he had read some science fiction I asked him who was his favorite author. I expected him to say Heinlein, since I assumed Heinlein was the absolute best. Instead, Connell said Clarke. We’ve been arguing ever since.

As a kid, I wanted to be a science fiction writer like other kids wanted to be rock stars, football players, or astronauts. And even though I took writing courses in high school and college I never developed the discipline to write. Later on, I guess as a mid-life crisis, I took off six weeks from work in 2002 and attended the Clarion West Writers Workshop, and afterwards began a MFA in creative writing. I still didn’t have what it took. When I retired in 2013 I thought I’d finally get down to writing, but I didn’t.

Over the eight years I’ve been retired I’ve been reading and rereading a lot of science fiction. It’s become a pleasurable hobby to fill my time. But I’ve also discovered why I’ve psychologically embraced the genre. For most of my life I thought that space travel was important to the development of humanity, and science fiction was a kind of prophetic literature that gave exploring the high frontier meaning. Now I see wanting to leave Earth as a kind of psychological escape, and science fiction is only a minor art form, a specialized kind of fantasy and entertainment.

In my old age, I read science fiction and admire it for creative storytelling. But I know it’s only a couple steps up artistically from comic book reading. I do read literary novels, and know the difference. Science fiction appeals to the adolescent in me. That keeps me positive while the world around me is turning negative. Reading science fiction in my old age makes me realize I never grew up, but then I’m also realizing most of the people around me never have either. As a species we’re not very good at maturing and facing up to reality.

The percentage of people who rely on denialism to cope with reality grows every day. I like to think I don’t deny reality so much as avoid it. Most of the people who aren’t deniers tend to be avoiders. Only a small percentage of the population face up to reality. I don’t mind reading and studying reality, but I have no discipline to live the life I know I should live. Reading science fiction is my way of occupying my mind when I’m not thinking about how humanity is destroying itself.

I admire people who actual do something about the problems we face, but they are very rare. Most of us just fool ourselves that everything is going to be okay and maybe do a few token things to help, but isn’t that really an effort to sooth our guilt? Reading science fiction is my version of watching Ted Lasso or The Andy Griffith Show. But we’re all on the Titanic killing time in amusing ways even though we know we could change the ship’s course if we worked together. Unfortunately, cooperation is not in our genes.

Reading science fiction teaches me about the possibilities. Science fiction has always been about building better futures, advocating better societies (utopias) or warnings of de-evolving into dystopias, or even the nightmares of apocalypses. It’s all too obvious that we’re actually heading towards the collapse of our global civilization and an environmental apocalypse. Half the population copes by denying this, and the other half that does recognize our destiny does little to avoid it.

We indulge in mindless consumerism and socializing, or restless tourism, or occupy our minds with political and religious rationalizations. When I see people protesting that the 2020 election was stolen, or vaccinations are evil, or the January 6th attack on the capitol didn’t happen I realize those people have the psychology of children, the kind who throw tantrums, who scream “You can’t make me” or “You’re not the boss of me” to their parents, teachers, and even peers. But you can’t reason with them not because they can’t see reason, which they can’t, but because that’s their survival mechanism, and if you could get past it, these people would only fall apart. I have to assume reading science fiction is my survival mechanism.

I am starting to worry a tiny bit because some of my coping mechanisms are starting to fail. I used to binge watch TV in the evenings. I’ve always loved TV, and looking back see that it was a reality stress releaser too. But I now have to try a dozen or two dozen TV shows or movies before I can find one that I can watch. And I no longer can watch TV and movie science fiction. For example, I was looking forward to the new production of the Foundation series on Apple TV+. It just annoyed me, and I quit trying after fifteen minutes. I forced myself to finish the first episode the next night, but still no joy.

I worry that I’m also going to develop a tolerance to written science fiction, and it will fail to hold my attention like my TV watching. So far, I still find great pleasure in reading science fiction short stories. I don’t have the patience to read novels anymore, but continue to enjoying reading old SF anthologies and magazines. I worry that this love won’t last.

Luckily, I still have other interests to turn to if I finally wear out on science fiction. The current state of the world is very sobering. It might even cure my addiction to science fiction, but I doubt it. I’ve had it my whole life now. It might be too late to give up. But my attitude has changed. We wanted a lot of fantastic things from religion, and that’s true of science fiction. That’s why I compare them. I believe we need to change our expectations for both. Religion and science fiction need to focus on reality. They both need to be more down to Earth.

26 thoughts on “Explaining My Addiction to Science Fiction”