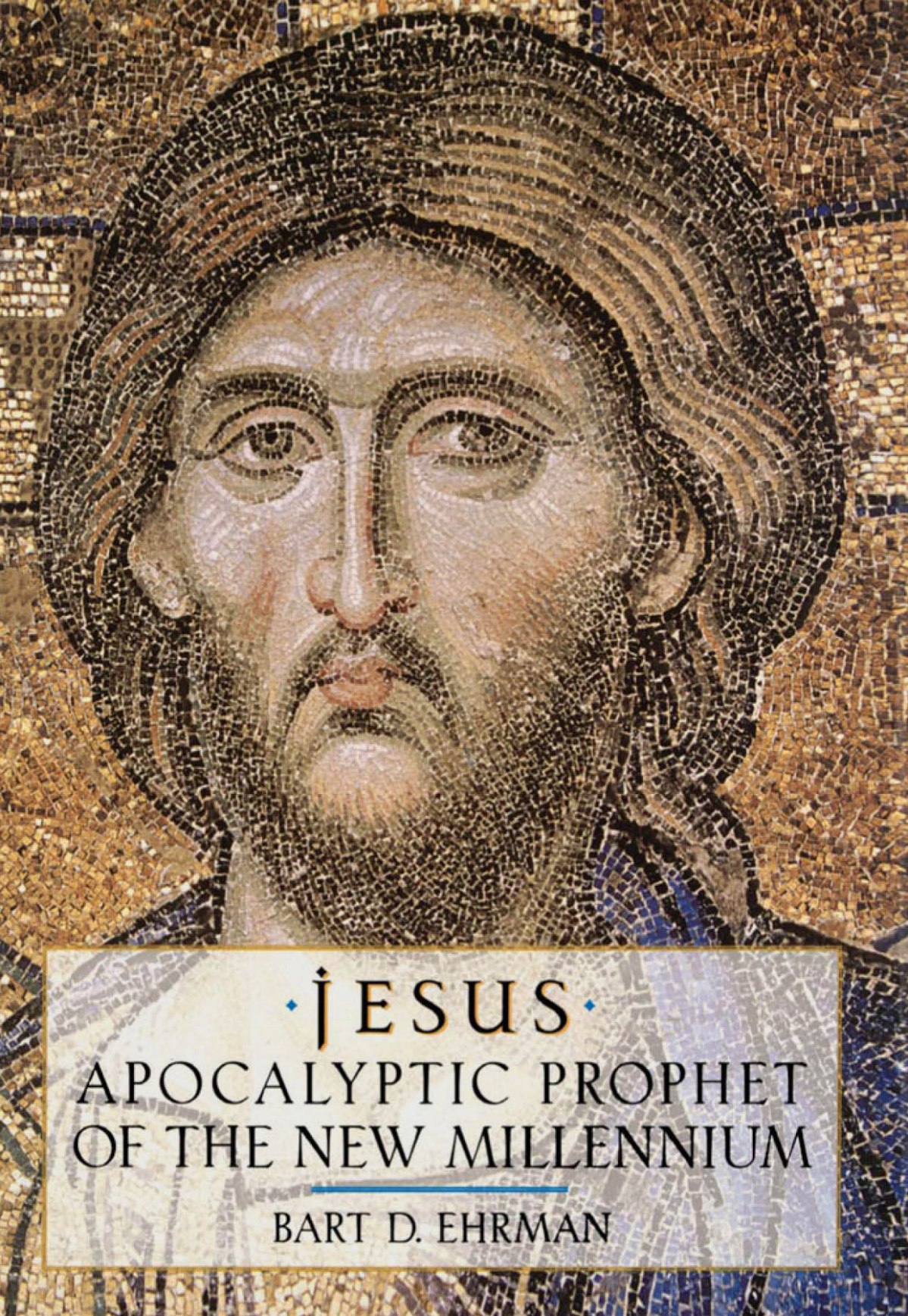 I am a lifelong atheist, but I’m not the kind of atheist who goes around trying to convince folks that God does not exist. Religion serves an important function for many people, giving them belief, community, morality, and solace. For some strange reason, I’m an atheist that enjoys reading about the history of Christianity, The Bible, and Jesus. Countless books have been written on these subjects, but most have been theological. I have no interest in those books. What I like to read are books by historians trying to figure out what actually happened two thousand years ago. It’s a magnificent cold case, a tremendous scholarly puzzle.

One of my favorite authors writing about this history is Bart D. Ehrman. I’m currently listening to Jesus: Apocalyptic Prophet of the New Millennium, one of his older books from 1999, but it recently came out on audio. Next month I’m looking forward to reading Ehrman’s new book Heaven and Hell: A History of the Afterlife when it comes out (3/31/20). But as of now, I’ve read:

For a historical figure that we know practically nothing about, Ehrman has found a great deal to write about. The fun of all this historical sleuthing is putting the clues together in various ways hoping for new insights. Most believers assume we know a whole lot about Jesus but from a scholar’s point of view, most of the common beliefs about Jesus are made up.

What Ehrman and other historical scholars are trying to do is figure out who Jesus was before he died. What we have are writings that began appearing decades after his death. The goal of all the research is to examine various written memories of Jesus to determine if anything remembered might be true of the actual person. People have been making up stuff about Jesus for two thousand years. The assumption is the oldest documents might have the best clues. That’s what Ehrman’s books are about, going over the old documents, again and again, comparing them against each other. Reading Ehrman also teaches us about the methodologies of historians and the limitations of memory and writing.

Ehrman mostly focuses on first-century documents, the writings of Paul, the Gospels, a few other documents, and their possible ur-texts we don’t have. For a period of about 20-30 years after Jesus died his followers collected his sayings. We assume they were only passed down orally at first. Eventually, they were written down, but we don’t have copies of those sayings. Later on, the gospel writers used those collections of sayings to create the four Gospels. However, the information in each varies. And the newest Gospel, John, reports a great deal of information not reported in Matthew, Mark, and Luke. I tend to agree with many historians that ideas about Jesus first appearing in the Gospel of John were made up.

In the second and third centuries, many more gospels were written and scholars tend to discredit them for various reasons, but they do offer interesting clues. The assemblers of the New Testament also favored the oldest gospels as authentic and considered the newer gospels as heretical. But if we examine all the gospels, there are reasons to doubt all of them because we see that various followers had different agendas in composing their gospels, and none of their reasons seem related to the historical Jesus. Every gospel was written claiming who Jesus was and what he taught. They are all interpretations with a purpose that fit the times in which they were written.

Thus historians are left trying to figure out what Jesus actually said from things he didn’t write down himself, but was written down by many different people decades later. This is why we have so many different conceptions about Jesus. It’s like saying there are 1,000 different biographies of Jesus and one of them could be right. But there’s also a good chance they might all be wrong.

Ehrman and other historians assume it’s possible to deduce the truth. I’m not sure it is.

The Jesus Seminar took a different approach. It asked theologians and scholars to vote on every saying by Jesus hoping some kind of consensus might reveal the truth. But after 2,000 years, can we really expect to find the truth? If you want to know more of their results read The Five Gospels.

What is revealed from all this study is how Christianity began. Jesus’ followers made him divine and determined the scope of his divinity. Ideas about the afterlife, God, and Heaven were all invented long after Jesus died. There is no evidence that Jesus believed any of it. Christ and Christianity are what his followers invented.

What I wish Ehrman (or some other historian) would write is a chronology of how various Christian dogmas emerged, when, and if possible who created the idea first.

I tend to accept Ehrman’s theories about who the historical Jesus was and what he preached, but I think there’s still room to doubt we can even know that much. And I don’t know if it matters. I think we might be giving Jesus too much credit. Both believers and atheists like me want Jesus to be someone wonderful. And believers want Jesus to be someone who validates the truths they want to prove true. I guess I just want to know what the guy really said and how it got distorted.

There’s a good chance that almost everything we call Christianity was invented between 50-350 CE. We don’t really know when Jesus actually died, probably 30-36 CE. Paul started preaching in the 50s. He got to meet some of the disciples that knew Jesus, but we’re not sure how much he learned from them. Paul’s writings actually say very little about Jesus the man. They are about forming Christian communities.

We know the followers from about 33 CE to 60 CE collected the sayings of Jesus. Paul probably saw some of these collection of says, but maybe not, because he rarely quoted them. We have to assume some of these sayings might have accurately recorded Jesus’ speeches, but we can’t be sure. Probably for many years, they were only passed around via word-of-mouth, and we know how poorly that works. And we know how people love to embellish a good story.

What we do have are the four Gospels that were probably written around 66 CD to 110 CE. Mark is assumed to be the oldest (66-70 CD). Matthew and Luke next (85-90 CE) and finally John (90-110 CE). We don’t really know who their writers were. Scholars assume they were not any of the disciples. Each of the four claims to tell the story of Jesus, but they each tell a somewhat different story, sometimes with conflicting details and beliefs. Think of how many books or movies you’ve encountered about famous modern people. Even the most serious biographies, with mountains of hard evidence, are always challenged on some facts. We can’t create perfect biographies even when we have voice recordings and videotape.

Paul essentially created Christianity in the 50s CE. What he preached was often disputed by Peter and the other disciples, but because Paul was so good at spreading his version of the word explains how he got the Christianity snowball rolling. Whoever wrote the Gospel of John created many now cherished beliefs for the emerging religion. Starting in the second and third centuries new theology was added by other writers who we know their names and have some of their writings.

I feel I have read enough on Jesus. I’ve given up on ever knowing who he was and what he taught. There’s just too much speculation. My rough idea after reading all these books is Jesus was probably a very interesting guy who taught something, probably something very unorthodox, probably utopian, and he got himself killed for it. His followers, who passionately believed in him were thrown into despair because they didn’t want to give up on his wonderful vision of how things could be. They came up with the resurrection as a way to keep the dream alive. All the stories about the post-crucifixion were invented to put a positive spin on the inconvenient truth that Jesus was wrong about the Kingdom of Heaven appearing on Earth in his lifetime. They used his memory to preach what they wanted. To sell their ideas they promised potential believers they would gain everlasting life. To gain converts, they made Jesus into a divine being. Then people who had never known Jesus, the gospel writers, started making up even better stories. The stories became so good, so convincing, that it converted most of the Roman world in a few hundred years.

I expect Ehrman’s new book, Heaven and Hell will cover that development. I also assume all the core beliefs of the various forms of Christianity in the last two thousand years are really driven about hopes of an afterlife. Donald Trump has clearly proved that Christianity is not about specific moral beliefs or spiritual discipline. What Christians believe today is too diverse to define them by a specific list of creeds. Basically, what ties modern Christians together is a vague belief in vague God and a hope of an existence after death.

The real Jesus apparently didn’t think of himself as the Son of God, but the Son of Man. He advocated that followers share their belongings, to even live together communally until God created the Kingdom of Heaven on Earth, which would happen in his lifetime. He apparently preached about compassion and how people should treat each other. It appears Jesus had very liberal views. Modern Christians are mostly conservative, so it’s hard to reconcile their beliefs with anything Jesus actually taught. Modern Christians are really disciples of Paul and the writer of The Gospel of John, and second-century theologians.

What I learned from reading all these books on Jesus is whatever he taught can only be discerned from those collections of sayings that existed before the gospels were written, unfortunately we don’t have copies. Some of those sayings are mixed in with the gospels, but we don’t know which. Even then, there are plenty of reasons to doubt anything attributed to Jesus after his death. Can you prove anything anyone said to you twenty years ago was verbatim and what they did was exactly how you say it happened?

15 thoughts on “How Christianity Was Created”