As previously mentioned, my two-person book club has decided to study The Federalist Papers. Linda and I are two liberals who want to understand conservative philosophy and these 85 essays that began appearing in 1787 are considered essential to understanding how our union was formed while detailing the reach and limits of the federal government.

There are a number of problems in reading and understanding these essays. First, the language is 18th-century English can be difficult for modern readers. Second, it helps to understand the times in which they were written. This is before our Constitution was ratified. Back then, most nations on Earth were ruled by some kind of aristocracy, so we must envision a group of men theorizing how ordinary people could rule themselves. This is very radical. The Federalist Papers were written by Alexander Hamilton, James Madison, and John Jay under the pseudonym “Publius.” Basically, Hamilton in his introduction was telling the citizens of thirteen states there are great reasons for forming a union but if you can’t understand them then every state should go its own way.

What’s rather ironic is Publius wrote The Federalist Papers to justify a federal government, but modern conservatives often use these essays to justify limiting or reducing our federal government and increasing the rights of states. We could have been fifty different little countries instead of the United States. Uniting a group of separate countries is not easy, just look at what happened to the Soviet Union or is happening to the current European Union. Neither force, ideology, or economic interests is enough to bind peoples of smaller governments into larger nations. The Constitution is one successful example that is always under attack. Thus the reason to read and understand The Federalist Papers.

The Federalist Papers are the foundations of our social contract. Conservatives want a smaller federal government, but the reasons to be governed are just as great at the local and state level. Hamilton, Madison, and Jay describe in great detail why we should agree to be governed and how to protect our freedoms from too much government and the dangers of those who want to govern.

Linda and I decided to spend this week trying to figure out the best way to read and study The Federalist Papers. Before we started this project we thought it was as simple as reading a book. It’s not. We then looked for books that explained The Federalist Papers or translated them into modern English with annotations. But even those books are tough going. There are many versions of The Federalist Papers. Some are straight reprints. Others organize the 85 essays into individual themes. We also considered picking a history book that covers everything related to the essays.

I’ve decided the best place to start is Wikipedia. Its entry for The Federalist Papers is detailed, concise, and easy to understand. Its Complete List entry offers links to explanatory essays for each of the 85 essays in The Federalist Papers. Starting with #1, which is Hamilton’s introduction, Wikipedia annotates essential quotes. It also links to each paper at Congress.gov, where the full-text can be read. 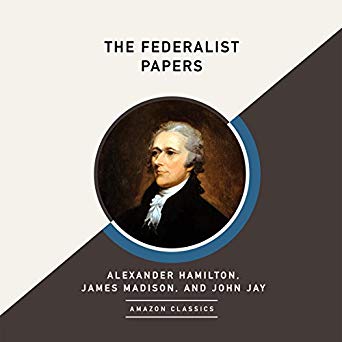 I’ve also decided to supplement this approach with The Federalist Papers (Amazon Classics Edition) audiobook from Audible.com and Brilliance Audio. Hearing James Anderson Foster narrate the papers helps me to understand the 18th-century sentence structure of Hamilton, Madison, and Jay. You can hear a sample here. The sample also illustrates what it’s like to try to read The Federalist Papers. It seems obvious to me they were meant for oration. The meaning of some of these complex sentences is often revealed in the cadences of how they are spoken.

Linda and I usually read books in 50-100 pages a week and then spend an hour or so on the phone discussing what we’ve read. This is a very rewarding book club structure. However, it’s extremely doubtful we can go through The Federalist Papers at that pace. Hamilton’s first essay, the introduction deserves a whole week of study and discussion.

I feel we’ve been overly ambitious in wanting to read The Federalist Papers like some other book. I worry that we will give up. I feel it’s a project that will take a good deal of time, but if we do 1 of the 85 essays a week as an extra project, it might be possible to achieve our goal eventually.

5 thoughts on “How to Read The Federalist Papers”