Science fiction writers believe they can extrapolate from current events and imagine possible scenarios that will prepare readers for the world of tomorrow. Science fiction writers never claim to have crystal balls that predict an exact future. Instead, they write stories that will never come true but theoretically could. Generally, they are of two types. Let’s make dreams come true (i.e. colonize Mars, build intelligent machines) or let’s avoid a nightmare (i.e. a fascist America, an eco-catastrophe).

Were there any SF tales written before these decades that imagined their significant events? Science fiction’s big winner has always been space travel. Would we have gone to the Moon if science fiction hadn’t imagined it many times for hundreds of years? Did Robert Goddard build rockets because of the fiction he read? A few science fiction writers wrote about the atomic bomb before 1945, but they got their ideas from scientists who were already talking about them.

What I’m talking about is different. There’s a famous cover to the July 1968 issue of Analog Science Fiction for the story “Hawk Among the Sparrows” by Dean McLaughlin. It shows an SR-71 Blackbird-like jet sitting on a WWI runway with a biplane in the background. That cover represents fun hindsight for a time travel story. But what if a 1918 issue of The All-Story Weekly featured that cover painting? Extrapolating that biplanes would eventually evolve into something spectacular like the SR-71 is what I’m talking about. How often has science fiction done that? 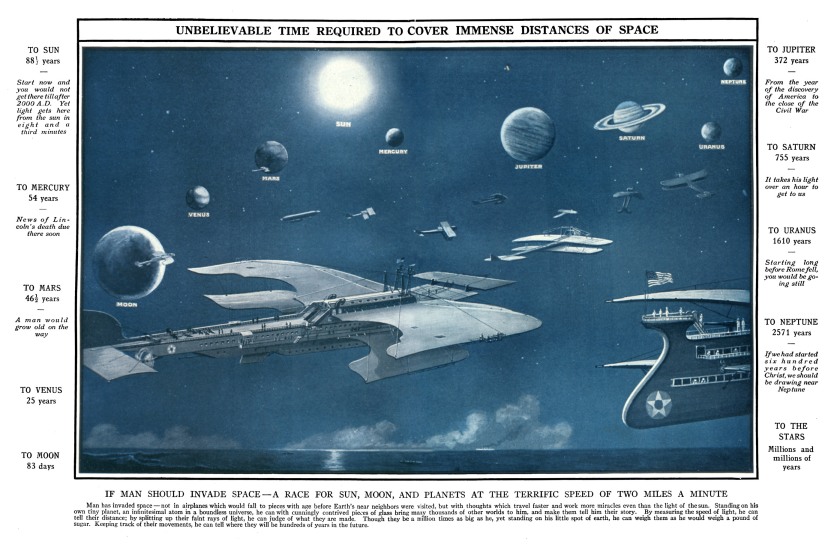 Here’s Harry Grant Dart’s 1918 artistic imagination of future aircraft/spacecraft. Not quite Lockheed SR-71s, are they? I’m not sure just how capable we are of extrapolation.

In 1911 Hugo Gernsback wrote Ralph 124C 41+ that contained many inventions he expected to be invented in the future. Just follow the Wikipedia link to read a rather long list of them. It’s 1925 hardback cover apparently shows a doctor interviewing a patient over a videophone. Science fiction has a pretty good track record of imagining possible future gadgets, but generally, their authors were inspired by current technology. Hugo Gernsback was probably the biggest proponent of technological extrapolation, but by the 1930’s science fiction had become 99% adventure fiction.

Science fiction seems less capable of extrapolating Black Swan technology, especially the social repercussions of those gadgets. The genre just wasn’t ready for computers, especially personal computers, the internet, the web, smartphones, and most of the technology of the last several decades. Science fiction quickly embraced all this technology, but only afterward. Evidently, change is happening faster than science fiction writers can imagine it.

Books like Brave New World, Nineteen Eighty-Four, The Handmaid’s Tale, and Stand on Zanzibar seem prophetic now because they appear to foresee our current social and political nightmares, but are they extrapolations? Weren’t they reactionary to the times in which they were written, and just happen to come into vogue again?

The 1909 short story, “The Machine Stops” by E. M. Forster is one of the most prophetic SF stories I’ve ever read. But it didn’t seem so in 1970 when I first read it. It was only recently, well into the Internet Age when I read it again, that I thought Forster was such a genius for writing it. The main character, Vashti, an old woman, is essentially a blogger using a machine to communicate with other agoraphobic citizens. Everyone lives alone in their rooms, communicating through the machine. Forster knows nothing about computers and networks, only imagines a very clever machine. Her son, Kuno wants to escape the machine. Forster says he was inspired by H. G. Wells’ “The Time Machine,” and it’s Eloi and Morlocks. But I can also imagine Forster thinking writing for magazines and book publishers was like being tied to a machine, and fantasizing about doing something in nature was appealing.

I am working on a science fiction short story. I’d like to think I’m imagining something people will do in the future that they don’t do now. But am I deluding myself? (I’m not going to explain my idea until the story is published.) I’d like to think I’m imagining something new, but I’ve got to analyze if I’m extrapolating or just describing what we do now in a new way.

I’m starting to wonder if I want to write a great science fiction story I should work as hard as possible to see into my own hopes and fears, set the story in the future, and then assume my dreams and nightmares might resonate with future readers.

6 thoughts on “Judging Science Fiction by its Extrapolations”