My friends Mike, Piet, and I are making a list of the most remembered science fiction short stories. The problem is how to create a great list. We don’t want to list our personal favorites. Instead, we’re studying all the ways SF short stories are remembered by readers, critics, editors, and writers. We’re collecting lists of recommended stories into a database and intend to make the most frequently remembered stories into our Classics of Science Fiction Short Stories list. This is a time-consuming project, and I’m using this blog to think about how we’re doing it. I’m open to suggestions and recommendations.

Most bookworms prefer novels. Anthologies and author story collections sell poorly. Science fiction magazines have damn few subscribers nowadays but there are or will be at least 11 best-of-the-year anthologies collecting short works of science fiction this year. That suggests a healthy interest in the shorter forms of science fiction. (And yesterday I read “The Rise of the Sci-Fi Novella: All the Imagination, None of the Burden” by Jason Kehe.) We want to help SF fans find the older stories that are becoming forgotten that evolved the genre.

At first, I was just going to make a list of my favorite stories for my own use. Then I started an online reading club, The Great SF Stories v. 1-25 (1939-1963) to discuss the stories in the Isaac Asimov and Martin H. Greenberg series with others. I also joined the Classic Science Fiction & Fantasy Short Story club. I’ve found a handful of dedicated fans of short science fiction. Recently, Piet Nel and I decided to create a Classics of Science Fiction Short Stories list for my site  Classics of Science Fiction. My friend Mike, a programming wizard, volunteered to churn through our data.

The internet provides countless lists of best SF novels, but damn few for short stories. We’ve been studying those lists and how they were made. One side-effect of being a list maker is learning about how we remember the past. For fiction, either novels or short stories, it’s the tales that stay with us that we put on personal lists. That doesn’t necessarily mean they were the best stories, deserving to be remembered, or even well-written stories. It means they were great at triggering your emotions. One day I hope to feel confident enough to make my own list of stories I believe others should take the time to read. For now, I’m seeking the wisdom of crowds.

Fan polls are a good method for identifying stories that we collectively remember. Of course, as individuals, we often fondly recall stories that meant something to us but not to others. So the truest best list of stories is the one you make for yourself. However, a list of stories that many others love is a great tool for finding fiction you might love too.

Here are the fan polls we’re working with:

Peter Sykes at Sci-Fi Lists used anthologies and other sources to create a ballot. Visitors to his site vote for stories and can nominate new ones. He updates the results yearly. I like his results because many of the stories on his list are ones I remember. When I read through his list I feel like I’m fairly well acquainted with science fiction history.

Locus also allows their readers to nominate stories, and it tends to get newer stories onto its lists quicker. Often, I’m less familiar with those stories.

The ISFDB list is interesting because it’s based on the number of hits stories get when people are researching the ISFDB database. This doesn’t mean they are its favorite stories, but they are stories people are remembering for some reason.

If you know of any other fan polls for short SF let me know.

Awards are a key indicator of successful stories, but not a perfect one. Some awards, like the Hugo and Locus, are selected by fans. Others, like the Nebula, are chosen by professional writers. Still, other awards are determined by panels of experts. Each has their track record for spotting lasting stories. Awards are given the year after publication. During that second year, we also see annual best-of-the-year anthologies pick their favorite stories from the previous year. Sometimes awards and anthologies overlap in their selections, sometimes not.

Best of the Year Anthologies 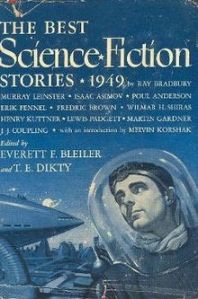 We’ve also entered into our database all the anthologies that collect the best science fiction stories of the year. These annuals began in 1949 with the Bleiler & Dikty Best Science Fiction Stories series. However, Asimov & Greenberg in 1979 jumped back to 1939 and produced The Great SF Stories series, which ran until 1964. There have been at least one, if not several, annual anthologies ever since that collect the best stories. Just as the Bleiler/Dikty series was petering out in the mid-1950s, Judith Merril took the helm of a new series. Then Donald Wollheim and Terry Carr were the caretakers of their annual best-of-the-year anthologies. Quite a few others tried developing an annual anthology but they were short-lived. It took two tries, but eventually, Gardner Dozois produce the longest running anthology series to date finishing the 35th volume before he died. Around the turn of the century David Hartwell, and then Jonathan Strahan put out collections of the annual best short science fiction, to be eventually joined by Rich Horton, Allan Kaster, and Neil Clarke. There are many others working the same territory.

These editors really know short stories. They are the experts. They often champion stories that fans don’t. Their input gives our list more authority.

After that all-important second year after publication, stories languish until they reappear in an author’s short story collection, or anthologized in theme and retrospective anthologies. For our purpose, we’ve tracked down all the great retrospective anthologies that worked to showcase a historical sweep of the genre. Often these anthologies are created by established writers, which give their picks another kind of recognition and authority.

Science fiction is now taught in college courses. Schools provide another kind of authority for recognizing classics. These are usually big expensive books, but they do come with great introductions that put the stories into context. Scholars provide a different kind of insight regarding the memory of SF stories, seeing important societal themes revealed in them.

We’re still working on our project, but I thought I’d write about what we’re doing in hopes readers might have other ideas of how to spot old science fiction short stories that are still readable today and make an impact. Sadly, science fiction dates rather quickly. It’s quite easy to look back over the history of science fiction and see many eras of distinctive science fictional movements that are no longer read.

There are some fans that will read old science fiction even if its ideas are obviously scientifically wrong. But for any story to work for new readers, it must stand on its own. Its success at storytelling must succeed with today’s twelve-year-olds as well as life-long genre fans. Just read the story reports at Young People Read Old SFF for brutal honesty and insight of today’s kids.

Sometimes a story becomes a classic because society changes. A great example is the 1909 story, “The Machine Stops” by E. M. Forster. Without the internet, this story has much less impact. I’m sure readers in 1909 thought Forster was crazy but 21st-century readers will think he’s Nostradamus.

Every new generation needs editors who will search out the old stories that will speak to the latest generation coming of age. Jeff and Ann VanderMeer’s 2016 anthology The Big Book of Science Fiction does just that.

I’m sure there are many other ways to identify classic short stories. Some short stories have become movies, like Heinlein’s “All You Zombies …” or “Story of Your Life” by Ted Chiang, or the many stories by Philip K. Dick that have been dramatized. Being filmed would be another good indicator of a classic story, but I don’t know how to make a list of them. It’s surprising how many SF short stories have been made into forgettable films, such as The Twonky.

Sadly, readers don’t remember short stories as well as novels. Can you name 12 classic literary short stories? Or, 12 classic mystery or western short stories? Recently I got my book club to pick an anthology of science fiction to read. I tried hard to get them interested, reviewing a story a day. But no one took the bait. My fellow book club members claimed short stories didn’t hold their interest, and they wanted novels that could keep them entertained for hours or days.

This is a shame. I believe science fiction short stories are superior to novels for delivering science fictional ideas. Novels are great for characterization and plots, but they feel too padded if you’re reading to be wowed by a far-out concept. When I was growing up, most paperback SF novels were less than 200 pages, often around 160. The Ace Double was very popular, and they contained two novellas. A 132-page science fiction magazine would include a serialized novel segment or novella, two novelettes and a handful of short stories. A good issue could leave you thinking about 10-12 mindbending ideas.

In 2018 I’ve switched from mainly reading science fiction novels to science fiction short stories and it’s been far more fulfilling. Just in the past two days, I’ve reread “Bloodchild” by Octavia E. Butler, “Day Million” by Frederik Pohl and “When It Changed” by Joanna Russ. They dealt with a horrifying symbiotic relationship with an alien species, a transhuman/transgender love story, and a society of women who’ve lived without men for hundreds of years having to deal with them again.