Some people love watching movies on their smartphone even though those film premiered on IMAX screens using Dolby Atmos speakers. Evidently, the essential quality of a film is in the storytelling. Television viewers used to watch widescreen Technicolor movies on nineteen inch black and white sets and still enjoyed them immensely.

So why should I worry about upgrading my TV to a larger screen and better sound?

Last night I watched a 1957 western, Night Passage, on a 56″ DLP television via a local over-the-air station called Grit TV. I had recorded it with my TiVo and it cut off the last few seconds. Luckily, I had a DVD copy to watch the ending. When I played the disc I was startled to discover this old western was in 2.35:1 widescreen and the color levels were completely different. When watching the over-the-air version, it didn’t feel like the aspect ratio of 4:3 of old TV pan and scan, because the frame was more rectangular. It had been cropped to be slightly widescreen in appearance.

Below is my way of faking what I’m talking about. I wish I could provide real screenshots, but this is close. I just cropped a widescreen scene with Brandon De Wilde and Jimmy Stewart to 400 x 300 pixels and converted it to black and white to imagine what 1950s TV might have been like (it would have been fuzzier). The second is a photo I found that feels more like the Grit TV version. I assume the third photo is the right aspect ratio. 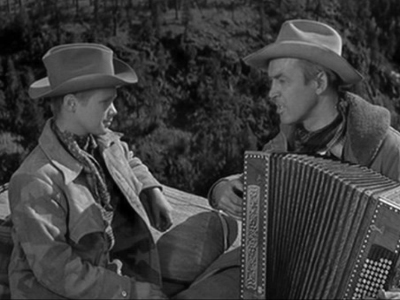 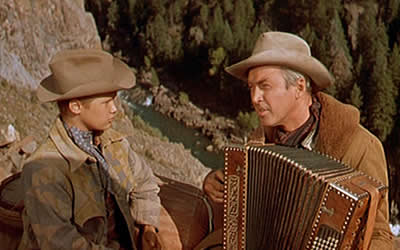 The thing is, I enjoyed the heck out of seeing this movie again. I especially enjoyed the beautiful scenery. The first time I watched this film was on a black and white television set — and I love it then too. I always remember it as a black and white movie even though it’s in color because of first seeing it on a black and white TV set. But when I looked at the DVD version, I felt like I had missed a significant portion of the film. The DVD widescreen view showed far more scenery, was much sharper and probably the color palette more accurate.

What artistic qualities do we miss from movies and television when we only focus on the storytelling? We could just read books instead if all we wanted was a story.

Would I have enjoyed the film more if I had watched the DVD from the beginning? I have dozens of my favorite westerns on DVD and Blu-ray, but quite often I watch them off of Grit TV. It’s just convenient.

I’ve been contemplating giving up the physical technology of CDs, DVDs, SACDs, and Blu-ray discs. 99% of the time I stream music or television. It would simplify my life if I got rid of all my discs.

I love the idea of minimalism, but what am I sacrificing by rejecting the higher resolution discs of my favorite movies, TV shows, and albums? For the most part, streaming music via Spotify isn’t that different from listening to CDs unless I’m concentrating. Streaming movies with Netflix and Amazon are almost as good as Blu-ray if I’m not concentrating.

Watching the DVD on my 56″ TV is probably as close as I can currently get to having seen Night Passage in the theater in 1957. That would be even truer if I had a larger television set. I assume the more I can recreate the cinematographer’s original vision, the more I can experience the original story to its fullest. But what are those extra dimensions beyond storytelling?

I was looking at TVs at Best Buy today, thinking I’d upgrade to a 65″ television. But my eyes loved the 75″ screens more, and I was blown away by an 83″ model. The bigger the screen, the more I felt like I was seeing reality. That’s also the difference between books and movies. Before movies, writers spent more words describing what readers would see. Such descriptions added realistic details. The better the author was at describing the world in details, the more readers felt like they were reading something based on truth.

Movies give verisimilitude to storytelling. The widescreen version of Night Passage made me feel Jimmy Stewart was actually in all those natural settings and not on a soundstage. When movies were black and white and had an unrealistic square aspect ratio, they were mostly filmed on sets and backlots. Those old films had a tinsel town feel. When we got Technicolor and widescreen, moviemakers went on locations around the world to give us more realism.

Would I experience art as more true-to-life if I built a home theater with a projector TV with a screen in the 100-120″ range? Probably. Is it needed? No. If I was watching a 4K nature documentary I’d certainly feel like I was there more than when watching a smaller set. It’s like when I play CDs and SACDs, I only hear the extra sound texture if I’m concentrating diligently.

It was when I watch a turtle swimming underwater on the largest sets a Best Buy that I noticed the details of the sand and plants it swam over. I then felt like I was there scuba diving. If I watched The Sweet Smell of Success, another 1957 film, I’d feel what it was like sitting in a glamorous smoky bar in New York City with Burt Lancaster and Tony Curtis.

If we watched Downton Abbey at an IMAX theater, the realism of the sets and costumes would be stunning compared to TV watching. Of course, when I tell my wife I want to get a giant screen television she thinks I’m crazy. Why spend so much more money when we already love our twelve-year-old 56″ television? Well, Susan isn’t a good judge of TV technology. She watches television while playing games on her laptop or using Facebook on her iPhone. She needs much less from a story to enjoy it.

The older I get the more I withdraw into my home. Our television set is the way we view the world and visual arts. Is it worth upgrading to 4K? If Night Passage was available on Blu-ray or 4K discs, should I buy them for that extra realism?

Should I give up over-the-air TV? MeTV shows old Perry Mason episodes cropped for modern widescreen TVs without any distortion. Perry never looked better. I tried to find a streaming version of Night Passage to compare, but it’s not available that way. Handmaid’s Tale is stunning to look at on a 56″ TV at 1080p, but what would it look like on a 75″ 4K set, or even projected to 120 inches?

Is wanting a humongous screen just crazy? I could give up all my high-resolution discs, and only live with convenient streaming on a modest 65″ television, but what would I be missing? I suppose someday streaming music and movies will have the same quality as discs and wall-size televisions will be affordable by all and we won’t have to worry about making such decisions.

5 thoughts on “How Important is Screen Size to Television Watching?”