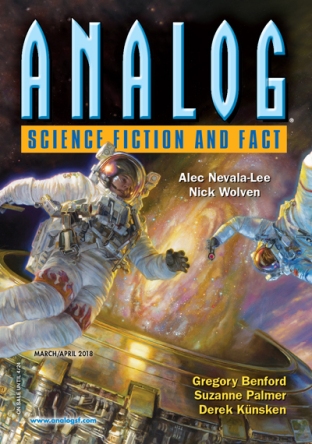 I’ve been reading the new March/April 2018 issue of Analog Science Fiction and Fact. I’ve found two stories we could call social media science fiction. I’ve read many other examples of this emerging sub-genre but can’t recall them at the moment. But I smell a trend.

Since I’ve been reading stories from Astounding Science Fiction, Analog’s previous title, from 50-80 years ago I can’t help but imagine what readers 50-80 years from now will think about these two stories.

The first story, “The Streaming Man” by Suzanne Palmer is about a fellow named Rohn who is an inventor of implantable medical monitors. For fun, Rohn programs these monitors to also play different musical instruments based on data from his body, so his body generates music and he puts that feed online. His unique compositions gather a large following of online listeners who become addicted to the music of his body. Rohn likes to interact with his followers via something like Twitter. His followers try to guess what Rohn is doing based on the music he makes. The story itself has other characters and complications but for us readers, this story tells us how creative the internet is and will be.

The second story, “Razzibot” by Rich Larson is about a fourteen-year-old girl, Marisol, receiving a Razzibot for her birthday. This device is a small AI driven drone that flies around Marisol filming her life for a live feed to the internet. Between Marisol’s need for followers, and the AI’s ability to always seek shots that flattery Marisol’s looks and appeal to the viewers’ voyeurism, the number of her followers grow and grow. Through the story, Marisol knows when she’s playing up to the camera, but also knows when she’s revealing too much of her personal life. The tale is about ego and technology.

These two stories are very engaging. Besides good writing, I assume their relevant topics would make them appealing reads to most people. Both of these stories feel very possible. In fact, the science might already exist to allow them to happen. The stories are so close to now I have to wonder if we should even call them science fiction. They could be considered contemporary social commentary. If a reader in 2068 reads them what will they think? I can easily imagine future readers believing these stories were realistic fiction about 2018.

That’s the thing. When I read technology and science news I often feel that I’m already living in a science fictional future. I also find it really hard to imagine the next fifty years experiencing as much change as I have in the last fifty years. It’s one thing for Dick Tracy comics to imagine a wrist phone back in 1946 that’s a lot like an Apple smartwatch, but it’s a whole other thing for us to imagine what people will be using in 2090. All the easy to imagine inventions have been fictionally invented.

That makes it hard for science fiction writers. Coming up with the idea of making music from monitoring bodily functions is clever. Thinking up an always-on selfie robot is good too, but less original. They already have drone selfie cams on the market. Building in the AI to make users internet interesting is not such a stretch. SF writers probably have a hard time keeping up with real science and technology.

Dick Tracy’s two-way wrist radios go back 72 years. It wasn’t called a phone. His creator didn’t imagine cell phones. Portable two-radios were already getting smaller back then, so it wasn’t a big leap to imagine one on the wrist. We’d be far more impressed if Chester Gould had imagined a cellular phone system or a computer network.

Science fiction often imagines too much, thinking up magical inventions, like teleporters, brain downloading, holodecks, or spaceships that can make interstellar flights in a few hours. We know computer chips are getting smaller, but should we expect smartphones to get smaller too? They were, but then they got larger. There’s a practical limit to what’s useful to hold. I figure most people want to over-imagine things and suggest people in 2090 will have smartphones built into their heads, and thus providing techno-telepathy.

I find Blu-tooth headsets annoying to wear and use, and I don’t see many people sporting them like years ago. And if you’ve ever talked to Alexa or Siri you know that there are limitations in doing things verbally. I suppose we could wear necklaces that are phones which operate by voice commands and have auxiliary tablet screens for reading. But I find hearing people talk on their cellphones annoying, so picturing a world where everyone looks like they are talking to themselves and not holding anything will be even more aggravating. The other day I saw a man walking down the street shouting angrily. I told myself, “I hope he’s on a phone.”

There are countless implications to everyone having a smartphone, especially one tied to our physiology. What happens to privacy? What happens to crime when everyone’s location can be tracked in great detail? There are endless stories there, but what happens to the old-fashioned mystery novel? We’d always know who-did-it. Have you ever noticed how many classic movies would have had their plots invalidated if the characters had cell phones?

I’m wondering if technology will eventually even out and a return to privacy will become compelling. Today I read “For Two Months, I Got My News From Print Newspapers. Here’s What I Learned” by Farhad Manjoo in The New York Times. Manjoo got better news by getting his news from slower news sources. I would think some science fiction writers might work on imagining a backlash to more technology.

I know I’m getting irritated by so many people calling me every day. Maybe we’ve become too accessible. Which is the driving force of the plot lines of these two short stories.