For someone whose childhood began in 1951, the year 2017 is the far fucking future. Sorry about the inappropriate word, but hey, that’s part of the relentless pace of change. We’re now allowed to use “bad words” in print.

I don’t think young people today can even imagine what a horrendous social offense it was to say fuck in the 1950s, much less write it down. If you could understand you might know what this essay is all about.

Last night I watch It Happened One Night with my friend Annie. I told her this 1934 picture was considered very risqué when it came out in 1934. After watching a while she asked why? By modern standards its so squeaky-clean it’s hard to spot the naughty bits. Even as a kid seeing it for the first time in the early 1960s, that old film still had its titillating parts. That changed after Midnight Cowboy.

I started listening to music in the 1950s on my father’s car radio when me and my sister could still stand in the front seat. This was before seat belts. It was his car and his music, but that’s how the times were back then.

For Christmas 1962 I got a AM clock radio. I played my music on that radio from 1962-1968. I turned it on when I got home from school and turned it off each morning when I left for school. I listened rock and roll while I slept, burning songs like “Rhythm of the Rain” into my unconscious mind. I grew up in Miami and loved WQAM and WFUN – the two competing AM Top 40 stations that played rock and roll.

My father had a second job bartending and would bring me and my sister 45rpm records that were pulled from the jukeboxes. In 1962 when I got the clock radio my sister had gotten a portable record player. I envied her that. (I might have stolen it.)

In 1963 an airman left his console stereo and LPs with my father was he was stationed overseas. That was my first introduction to LP albums. The airman left mostly folk music. 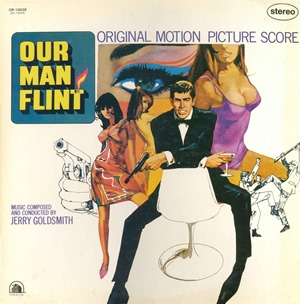 Eventually I got a little transistor radio to carry around. Then I got my own portable stereo record player when I started buying LPs in 1966. My first LP was the soundtrack to Our Man Flint. I would join the Columbia and Capital music clubs to mass collect albums. Joining, completing my fulfillments, quitting, and rejoining to keep getting those intro bundles.

When I started driving in 1967 I had a car radio. In 1968 I bought a console stereo system. It was my first use of credit, and I was only 16. The console introduced me to FM radio.

Just in the 1960s I went from AM to FM, and from mono to stereo. From tubes to solid state. In the 1970s I got a much larger console, started seriously collecting records, stopped listening to commercial radio, and eventually got into component stereo systems.

In the 1980s I switched to compact discs. I also tried different tape systems. As the decades past I used MP3 players and iPods, and even got into SACD audio for a while. For the last decade I’ve mostly been listening to subscription streaming music. I never got into Napster thievery. I guess I was too old fashioned to steal.

So in the course of half a century I went from listening to music on various physical media to listening to invisible streams of ones and zeros. In 1970 we were warned about Future Shock. Reading about what the future will do to us and living into the future are two different things. The future is both dazzling and tiring.

My point is the technology keeps changing. So does the music. So do the genres of music. I’ve bought some of my favorite albums many times, on LP, CD, cassette, SACD, and digital file (I was briefly into 24bit lossless).

The long playing (LP) record album came out in 1948, but it took a while to catch on. Because of streaming music, the concept of an album is fading. Not only have I outlived many technological changes, I’ve outlived an artistic concept.

And you know what? I’m tired. I’m fucking tired of change. I’m weary of the constant barrage of new technology. And I was a computer geek starting in 1971. Just read all those changes in computer tools I’ve used.

I’m happy with streaming music. Can’t we stick with it for a while? At least a quarter century, I hope. Give me 25 years and I’ll die on you, and the world can change as much and as fast as it wants after that.