Over at Stainless Steel Droppings, Carl Anderson has started his 2017 Sci-Fi Experience early. It’s based on Andrea’s Vintage Science Fiction Month. Usually, Carl reads old science fiction in January and February, but decided this year to switch to December and January. Since I’m already reading old science fiction I decided to join in. But I want to put a focus on my efforts. I recently read “17 Science Fiction Books That Forever Changed The Genre” and although I agree with some of their selections, I disagreed with others. However I really liked their idea of identifying the books that either changed the rules/direction of science fiction, or inspired other writers to explore their ideas. I like to think of certain science fiction books as snowballs rolling down a slope getting bigger and bigger – or even causing an avalanche.

James Gleick’s new book, Time Travel: A History does just that for The Time Machine by H. G. Wells. Wells’ little book has started a huge snowball rolling down the decades. It might be the best example of what I’m talking about. And Gleick describes many classic time travel novels that came afterwards, but he doesn’t come close to covering all the major time travel stories, just look at this list of books, television shows and films at Wikipedia. Hasn’t every possible speculative variation on time travel been imagined by now?

I want to make my reading of vintage science fiction about studying science fiction themes. I keep wondering if there’s a limited number of science fictional concepts. But then I read something like Spin by Robert Charles Wilson or Quarantine by Greg Egan, and think speculative fiction is unlimited. I do believe we can identify snowballing books, and that will help us count up the themes.

Another good example would be Starship Troopers, a book that inspired such novels as The Forever War by Joe Haldeman, Ender’s Game by Orson Scott Card, and Old Man’s War by John Scalzi, plus seems to have launched the Military SF sub-genre. When I watch movies like Aliens, I think Starship Troopers. When I watch Star Wars I think of Asimov’s Foundation books. 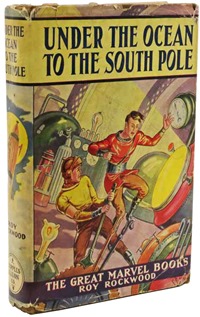 What other books, or series of books inspired a sub-genre in science fiction? Did Heinlein start the YA science fiction market with Rocket Ship Galileo in 1947? But then, does anyone remember The Great Marvel Series by Roy Rockwood (1906-1935)? Carl’s reading challenge generally focuses on books from 1950-1979, but what about books from 1850-1950? Have we already forgotten the books that inspired the Golden Age writers to write those 1950-1979 classics? Older fans today can remember juvenile series by Heinlein, Norton, Asimov and Wollheim, but science fiction for young people goes way back.

Did The Last Man by Mary Shelley, The Scarlet Plague by Jack London and Earth Abides by George R. Stewart start the sub-genre of post-apocalyptic science fiction last man on Earth stories? Remember Wells hinted at that in The Time Machine. And didn’t The Time Machine set things up for Olaf Stapledon? All that stuff about future species of humans.

I’ve been been wondering two things. One, is there a limited number of science fictional ideas, themes, subgenres? And two, how far back do they go? For my science fiction book club, we’re reading The Stars Are Ours! by Andre Norton from 1954. It presents two interesting themes. One, conservative/religious groups repress/destroy science and scientists, and two, people need to escape Earth to start over again on another planet. Both themes are relevant today.  Can we find books from the 19th century or even 18th century that first got those snowballs rolling? Do those themes ever stop being relevant? Will science fiction written in the  22nd century add to the existing snowballs? Will science fiction fans in the 2050s read many SF books from the 1950s? Or even known about them? Or will they think the science fiction they discover in adolescence as having original ideas?

At what point does vintage science fiction become forgotten science fiction, and newer, but older science fiction, become vintage? SF of the 2010s will be vintage by the 2050s. The appeal of vintage science fiction might be due to fans getting older and realizing what they once thought of as original ideas might be as old as the hills. As I’ve said before, Noah’s Ark might have been the first generation ship story. I find parts of The Book of Genesis to be very science fictional. If you squint at it in the right way, doesn’t the whole tree of knowledge of good and evil story seem like speculation about the evolution of human awareness? I can easily imagine a writer, male or female, living under Babylonian occupation, trying to imagine how everything got started, and wrote about a powerful alien being creating us. What’s really science fictional, is people think that story is the literal truth 2700 years later.

Generally, we read for story. We want to be entertained. But I think as we read and reread these vintage science fiction tales, we should examine the ideas they present. Then speculate about what inspired those ideas, and finally, evaluate how well they were implemented. As a liberal, I was rather shocked by the 2016 election results. The lesson I learned is don’t trust my assumptions. I’m applying that lesson to reading vintage science fiction. For example, should we assume that humans can leave Earth and start over on another planet if we totally screw things up here? I hated that Interstellar depended on that idea.

Some snowballs rolling down a hill just fall apart. Can we also count them as we read?

I believe science fiction represents a collection of speculative ideas that have been around a very long time. Eventually, they become real – like heavier than air flight, traveling to the Moon, cloning, constructing robots to do our work – or, we can eventually give up on the idea. I think time travel stories are now considered fantasy by most people. I hear they are remaking filmed versions of Starship Troopers and A Handmaid’s Tale. That’s a recognition that those themes are still valid to a mass audience. But are they considered fantasies or science fiction? Do we believe space marines and horrible theocracies are possible? I think we do.

I’m currently listening to The Drowned World by J. G. Ballard, a short novel that was first published in 1962. Ballard wrote several eco-apocalyptic novels back in the 1960s. They are part of a speculative snowball that now includes The Windup Girl by Paolo Bacigalupi and Green Earth by Kim Stanley Robinson. In biblical times God caused such catastrophes. After Darwin, it was nature that could destroy us. Now we imagine species suicide. But the theme is the same. Either all, or nearly everyone, gets wiped out. That theme isn’t new – it might have existed in pre-history.

I want to contemplate vintage themes while reading my vintage science fiction. 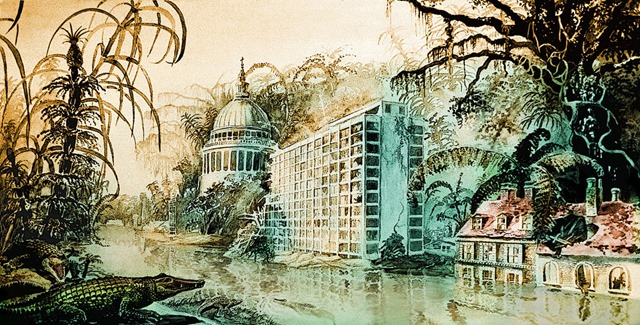