In his new book, The Song Machine: Inside the Hit Factory, John Seabrook begins by telling how his young son took over the car radio during their morning ride to school. Seabrook loves music and wanted his son to love his music, but the kid was adamant that he wanted his own music. I remember doing this to my dad back in the late 1950s. I’m sure all of us have been on both sides of that divide of music generations. Seabrook decided to get into his son’s music, and ended up writing a fascinating book.

How much cross generation listening goes on? Don’t most people bond with the music from their teenage and college years and then essentially stop listening to new stuff when the next generation annoys them with their music? In recent years though, I’ve noticed that some kids have embraced a few bands, songs and albums from my generation, the 1960s. I belong to their grandparents’ times. Are these kids rebelling against their parents’ by listening to the music their parents rejected?

My generation (who knew the Who could be so prophetic) has become terribly nostalgic for music history, seemingly to never tire of documentaries like, The Wrecking Crew, Muscle Shoals, 20 Feet From Stardom, Standing in the Shadows of Motown, Big Star: Nothing Can Hurt Me, Searching For Sugar Man, Atlantic Records, and Respect Yourself: The Stax Years. Just last week I watched documentaries on Fats Domino and Carole King. I’d watch more if I could find them. It’s funny, but this music is the one bridge I have with my Fox News watching conservative friends. We hate each other for our politics but commune over music.

But if I tell my peers I have Katy Perry or Nicki Minaj on my playlists they laugh at me. But if I tell them I’ve been listening to Ronnie Spector or Dionne Warwick it sparks a memory fest. And if tell them I’m been playing Peggy Lee or Lena Horne, a few of them will perk up. Among my music loving buddies who do cross generations, they generally travel backwards. I guess the young people I meet with Jimi Hendrix T-shirts are traveling backwards in time too. I don’t know why older folks look down on the music of younger generations. I have a number of friends who stopped listening to new music around 1975, and no matter what I play for them, I can’t seem to get them to move forward in time.

That’s a shame because musical creativity didn’t stop in the 1970s. Seabrook writes specifically about pop music (Katy Perry, Ke$ha, Rihanna, KPOP, American Idol, Denniz Pop, Max Martin, Dr. Luke, Ester Dean) and how they make hits with computers and teams of creative personnel that collaborate with the performing artist. There are no singer-songwriters here. No bands that play all their instruments. Producers are the emperors of the studio, hiring up to a dozen people to write a song. But wouldn’t that be true back in the Motown era if everyone who added anything to a song got credit? The Song Machine was absolutely fascinating to me, even though I’m not from that generation. It annoys me that my friends won’t give new music a chance, and probably refuse to read this book.

All this cogitation about cross generation listening has made wonder about many things. How do kids today choose what they listen to from past generations? And why? Are they mesmerized by tunes in movies and end up chasing them down? Have they found LPs at Granny’s or Goodwill, which inspired them to dig up an old record player, curious about the tunes on those strange black discs? This morning I was wondering why young people remember The Beatles, but not The Byrds. Is there any reason for one generation to remember the pop culture from another generation? Has classic rock become the elevator music of today, and Beatles songs became ear worms boring into young brains? Do they teach The Beatles in school? Maybe kids clicked past nostalgia shows on PBS and got hooked. I don’t know what percentage of today’s generation discover old music, but is there any reason to expect them know about my music, or even like it? And why don’t I ever hear them express their love for The Byrds—my favorite band from the 1960s?

At the moment I’m listening to a collection of 1950s songs on Spotify because I caught an episode of American Masters on PBS about Fats Domino. One thing I didn’t know, Fats was as popular as Elvis for a short while during the 1950s, but people now remember the 1950s belonging to Elvis. That makes me think there are some people like me, who remember their decade of music differently. I hardly play The Beatles anymore, but I play music from the 1960s constantly. Bob Dylan, The Byrds, Motown, San Francisco rock and pre-1965 Brill Building pop dominate my memories. If I made list of my favorite songs, I bet there would be a couple hundred songs from the 1960s at the top of my list before I even listed my first Beatles tune.

And I loved The Beatles, but I loved other artists from the 1960s more. Should I encourage young people to discover their music? Should schools teach 1960s music like they teach classical music in music appreciation courses? As I got older I sought out popular music that came out before the 1960s, going back into the 1950s, 1940s, 1930s and even the 1920s. I crossed genres into jazz, country, big band, folk, pop, world, opera and classical. I suppose some of the kids who are discovering The Beatles are doing that today.

When does pop culture become history? When does memory become nostalgia? They used to play Fats Domino songs like I’m listening to as I write on the weekends in 1962, on WQAM and WFUN, and called them “Oldie Goldies” even though they were less than ten years old. Now they’re over sixty. People from my generation go to concerts today performed by acts they grew up with, even though those artists are even a generation older than us. I’m not keen on seeing dinosaur rock. I love remembering those performers when they were young, vibrant and in their times. On Facebook I have friends who post photos from parties where they act like they are still in high school. That’s cool. But should they listen to some new music too? It’s really hard to give up the pop culture that imprinted on us as teens.

I’m not sure there are reasons to require listeners to cross generational divides. When I watch “People Are Awesome” videos on YouTube I realize the current generation have plenty to keep them busy, more than I ever had. Now is always more important than the past—or the future. On the other hand, I’ve switched from Fats to “Jealous” by Ester Dean, playing it over and over. It’s definitely not from the 1950s! I’m too old to live in the times in which this song belongs, but Dean’s voice and melody touches my heart in a way that I wish I could. 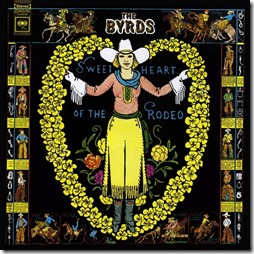 Do the young today long to visit my era in the same way I wish I could be young now? The Beatles were tremendously exciting, but were they more exciting than the groups now? Why are the sounds of The Byrds, Buffalo Springfield, and Jefferson Airplane still siren calls that hold me back in time? If I stopped listening to the songs that tie me to the past, could I modernize my brain by only playing new songs on Spotify?

I often think about my future when my body will be fading out of existence and my mind barely floats in reality. I’ve often thought listening to music on headphones while I die would be a great way to go. Will I be listening to seventy year old songs? More and more, the songs on my main Spotify list are newer ones. I play my tunes on random play. Will I leave reality hearing 1965, or 2037? Wouldn’t it be weird if I lived long enough to live The Sixties again?