Last night I watched Tiny: A Story About Living Small, a documentary by Merete Mueller and Christopher Smith, about Smith’s year building a tiny house. I’ve seen several news stories about tiny houses in the past few years, read some articles, and even met a handful of people who told me they’d love to build and live in their own tiny house. There is a certain appeal to them. Most tiny houses are personal works of art that reflect their owner’s philosophy about living simply. The tiny house movement counters the extravagant big house trend that has existed for decades. Most tiny houses are mobile homes so they appeal to people who want to travel. And they are a cheaper way to live.

Like the back-to-the-land movement of the 1960s and 1970s, I don’t think the tiny house movement is sustainable, or will appeal to most people. However, it is very appealing to a lot of people. And it brings up some very important philosophical questions. How much space does a person need to live comfortably? How much space should a person use to be environmentally ethical? How can we maximize the efficiency of the space we use? What’s the minimum space needed for optimal psychological existence for one person? How does the psychological living space change when there are two people? What about a family with children?

I live in a house that’s about 1,700 square feet. I’ve lived in larger and smaller homes. My wife lives out-of-town during the week in a one bedroom apartment, so for most of the week that 1,700 square feet is all mine. I’m currently using every room of the house, but I’m pretty sure I could do with less, much less. We have a living room and den. We have a dining room that seats six, and a breakfast area that can seat another six. I use the living room for reading, and the dining room for my Raspberry Pi computer setup. At a guess, I’m pretty sure I could keep all my stuff I use and consolidate it into a comfortable living space of 800 square feet. This isn’t counting what my wife might want. If I had to, I could give up a lot of stuff, and probably still be happy with 400-500 square feet. Still much bigger than the average tiny home.

In the film they profile tiny houses that ranged from 84 square feet to about 250 square feet. Most were in the 150-200 range. This is way smaller than what I’d ever want to live in. Of course, if everyone lived like tiny house people there certainly would be a lot more land for wildlife, and cities and towns would shrink dramatically.

I wonder if our population explosion is inspiring people to live with less, both as a financial necessity, and because we’re all being pushed together. I can’t help but think many of the people profiled want to get away from normal society.

Most of the tiny house people interviewed were people living by themselves, and I wonder if they are modern day Henry David Thoreaus? Tiny houses have the look of Thoreau’s Walden cabin. It’s not for everyone. Even in in the film Tiny, the girlfriend wanted to move to New York City, because that was here dream. Most of the tiny house people interviewed seemed happy to live with their books and cat. I didn’t see any large screen TVs and video game consoles in the tiny houses.

Nor do we see washers and dryers, large refrigerators and stoves, dishwashers, bathtubs, and I never spotted an air conditioner or hot water heater. Tiny houses are like living on a sailboat, travel trailer or RV. They are much smaller than even your typical double-wide. It would be a sacrifice for most people to live in one, so they convey a kind of spiritual living, and probably appeal to people who think a monkish lifestyle is good for their soul.

It appears that the common practice is to park tiny houses on other people’s land, often in backyards.  I don’t know about the legality of this. Nor do I understand the requirements for water and sewage. In the film they did show power coming from a heavy-duty extension cord, and from solar panels. I just read it’s common to depend on a toilet in a nearby house, or use composting or incinerator toilets. All of which sound like a hassle. So does going to the laundry.

I’m not against tiny living, but I think I’d prefer a tiny apartment that did have flush toilets. If we’re truly going to be environmental, I think the future will be in apartment living, and planned communities. Most people hate apartments because of the sound of other people. If they were soundproof, they might be more appealing. What would give them more hippie appeal is if the apartment building was integrated into a park, and car parking was away from the living areas, or the site located near good public transportation. If apartment buildings were designed as planned communities, targeted to specific kinds of people, they’d probably be even more appealing.

I think we do need to work at being less wasteful, more efficient, and far less polluting. The human race’s impact on Earth is becoming very close to be a cancer, if it hasn’t already. We’ve stolen so much animal habitat territory that humans have become another mass-extinction event in Earth’s history. I don’t think tiny houses are the answer though, not directly. My guess is most people will live in a tiny house no longer than Henry David Thoreau lived in the woods alone. And living in a tiny house for a year would probably teach all of us many valuable lessons. I can imagine a spiritual movement of people choosing to live in a tiny house for a period of time to learn what they truly need in life.

I found another documentary about the movement, We the Tiny House People. And Google says there are even more of them.

Here’s another short film about a very elegant tiny house.

If you want to see more, just follow this link to YouTube which offers many more films. It’s amazing how popular this movement is. Notice the other links. There seems to be part of a larger movement to build cheaper houses, which is also part of the DIY movement. Tiny houses might appeal to a large variety of people for many different reasons.  Just look at this Google page for images of tiny houses. Here’s one screen shot to give you an idea – click to make larger. 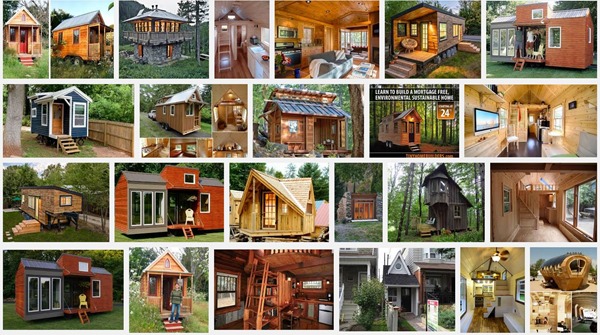 Notice how creative an artistic these little houses are. Building a tiny house is much easier than building a full-size house, so part of the movement might be about just building a house of your own design. I wonder if parks for tiny houses will become popular like RV parks and mobile home subdivisions?

There’s quite a few websites devoted to tiny houses:

If I’m ever in Portland, Oregon, I’d like to stay in the Tiny House Hotel just to see what living in one is like. Other than that, I think in general, I’ll admire them from afar, although I wouldn’t mind visiting Tiny House Show if one came to town. However, the real life effect on me is to think about all the junk I live with now. This film makes me want to catalog all my possession and think about how many I really need. I have four computers, two tablets, two Kindles, and an iPod touch. Do I need so many? Of course not. Yet, I want more – an iMac and Chromebook. My Raspberry Pi is a tiny computer.

Watching these people live in tiny houses makes me realize how big my living habits are. It makes me want to clean our closets and drawers, and get rid of junk that I don’t need. It makes me want to do more with less. I just don’t want to live that small – but I would be willing to go smaller.

3 thoughts on “The Tiny House Movement—What’s The Practical Size for Living Space?”