Penn and Teller’s new documentary, Tim’s Vermeer, is about Tim Jenison, founder of NewTek, a man with no drawing skills, deciding to paint a picture equal to one by Johannes Vermeer by using technology to aid him.  Jenison was inspired by David Hockney who wrote Secret Knowledge: Rediscovering the Lost Techniques of the Old Masters, which developed the Hockney-Falco thesis.  Basically, Jenison attempts to completely recreate a Vermeer to test this theory, and David Hockney appears in the film to judge his results.  Jenison decides to paint The Music Lesson, and goes so far as to recreate Vermeer’s studio in a warehouse, use the same handmade pigments Vermeer used, and grind his his own lenses to exclude modern technological advantages.   The film is about the years it took to prove a Vermeer like painting could be made using the Hockney-Falco like techniques.

I found the film dazzling for several reasons.  First, Tim Jenison is an inspiration for anyone with big ambitions.  Second, and most importantly, I loved seeing the Vermeer paintings blown up to the size of theater screens.  Third, the film shows just how tedious it is to paint a picture.  Fourth, it’s just so damn far out to see how technology works.  It really doesn’t matter if you believe the hypothesis or not, because the documentary is a wonderful example of how inventors works.

Here is the original Vermeer.  Click to see larger version.

Here is Jenison’s painting.  It’s different because the studio and models he used were different. 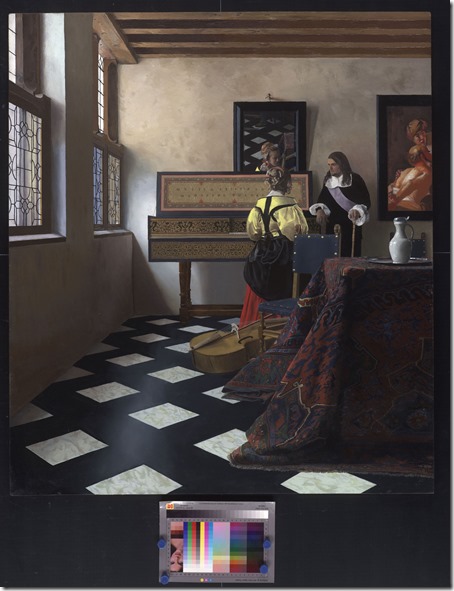 The trouble with the hypothesis is it can’t be proved.  We have plenty of contemporary painters who paint dazzling photo-realistic paintings that don’t use similar optical technology.  Tim’s Vermeer’s feat of invention just proves that photo-realistic painting can be painted by a non-artist using technology.  Essentially, Tim Jenison became a very slow photographic emulsion.

The hypothesis contends that beyond a certain point the eye can only see so much and the Vermeer paintings represent something beyond human capabilities.  I’m afraid they are misjudging the capabilities of the mind.  Just study Oliver Sacks.

Look at this video about Stephen Wiltshire’s ability to see, remember and draw.

Or look at what modern painters can do, such as Alyssa Monks.

Or watch this painting of Morgan Freeman being made on an iPad by Kyle Lambert.

If you want to know more, please read: