Modern medicine is scientific, evidence based, and very conservative.  Doctors like to treat patients with medicine and procedures that offer the best known odds for success.  No doctor wants to try out something new only to discover it kills their patients.

Patients on the other hand are fearful folk.  They usually know little of their newly diagnosed conditions and they are afraid of suffering or dying.  They are quick to take any cure they are offered.  If they have faith in their doctor and she says  take these pills and have this surgery, they will comply.  However, many people are afraid of pills and surgery.  They hate to suffer, but they are afraid of the cures offered them.  If they hear about alternative medical treatments that are less scary they will chase after them.

I’ve recently discovered I have clogged arteries, but won’t know how bad until next Thursday when I get a heart catheterization.  This is the kind of personal experience where I get to explore very concrete details of reality.  I have choices to make.  If I decide wrong I could die.  If I decide right I get restored health.

The conservative medical solution is to put in a stint and have me take Plavix for a year.

The alternative is a proposed paradigm shift that claims if I eat a radically different diet, I can reverse the buildup in my arteries.  My doctor says there’s not enough research to support this conclusion.  Books by Dr. Ornish and Dr. Fuhrman claim otherwise.  My doctor replies that those doctor’s claims are meant to sell books, and are unproven.

Here’s my problem.  I can’t handle drugs.  My doctors usually pooh-pooh my fear of drugs.  But here’s what topical steroids did to me. 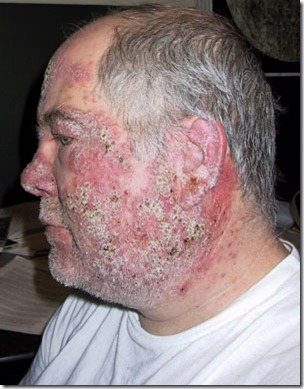 And that photo was after I healed considerably.  It took a year for my face to clear up.

So the idea of getting a stint and then having to take a powerful drug for a year is pretty scary.  If it was just a stint, I’d say great.  When I had a heart arrhythmia they eventually fixed it by zapping something inside my heart.  That was after years of torturing myself with various heart drugs.  They had offered me the ablation when they offered me the drugs, but I believed I could control my heart arrhythmia with beta blockers, diet and exercise.  I did for years, but ultimately I couldn’t.  Letting them zap my heart was great.

Once again, I’m back toying with the idea of curing myself by diet and exercise.  However, this time, there’s more evidence, supported by real doctors, to suggest that the lifestyle change is a possible cure.

I’ve already shifted towards the new diet, but it’s hard.  Even though I’ve been a vegetarian since 1969, I’m a very poor eater who is addicted to junk food.  Food I found comfortable for my stomach was slowly attacking my heart.  Now switching to healthy food sometimes tears up my stomach like some medicines.  Yet, I do feel better, and I believe if I learn to eat the healthy, and especially if I learn to cook it and make it an easy routine, I could switch my lifestyle.

I do have a proven record of changing.  I did go vegetarian at 16.  And in recent years I’ve control my back and leg pain with physical therapy exercises.  I gave up pain pills and anti-inflammatory meds.

One reason I think conservative doctors are against lifestyle cures is they know few people can change their way of living.  My dad died at 49 after three heart attacks and a stroke.  He never gave up his Camels, Seagram 7, or steaks.  Nor did he try to exercise.  I was in my teens at the time, and I wondered why he wouldn’t change.  Now I know how hard it is to change.  Sometimes I think I’ve lived 12 years longer than my dad because I became a vegetarian.  It also helps that I didn’t follow in his footsteps of smoking and drinking.  What choices can I make to live another 12 years, and maybe 12 more after that?

One reason I believe lifestyle change might work is because bad lifestyle habits clogged my arteries in the first place.  The other bit of logic is if I got a stint and continued to eat and live like I did, wouldn’t I just clog up other arteries?  Isn’t clogged arteries a sign that I’m doing something wrong and should stop?

Such logic can be deceptive.  I’m reading Thinking Fast and Slow by Daniel Kahneman who details all the ways our own brain tricks us.  He chronicles a long list of deceptive psychological mechanisms our brains use to convince us that wrong things are right.  So, how do I know if my cardiologist is right, or Dr. Ornish and Dr. Fuhrman?  Decades ago some researchers suggested that stomach ulcers might be caused by the helicobacter pylori bacteria.  Most doctors said that was insane.  But over time there’s been a paradigm shift.

Are we at the beginning of a paradigm shift with chronic diseases and diet?  We know that the western diet has led to the increase in various chronic diseases, so logically it would seem if we gave up that diet, we might reverse course?

It doesn’t matter what I think.  I know my brain tricks me.  What’s important is what science learns.  My doctor is right to be skeptical of any idea that’s not well backed by lots of scientific studies with huge numbers of participants.  Ornish and Fehrman claim the science is there.  I need to find it.