If the golden age of science fiction is 12, what am I to read at 56?  I still yearn for the same sense of wonder thrills as I did as a kid, but they are much harder to find.  What if I reread the books I loved at 12 now at 56?  Are they the same books even though I’m not the same me?  No, of course not.  I reread one or two books a year, so I know.  I’m listening to City by Clifford Simak, a story I loved as a kid.  I barely remember the flavor of the story, and damn few details.  It’s almost like reading the book for the first time. 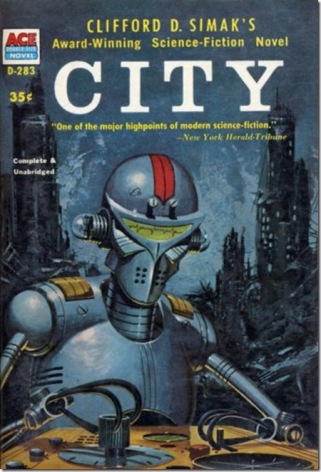 However, the sense of wonder I get from City in 1965 when I first read it, is much different from 2008, while listening to it now.  There are so many factors at play:

There are other factors, but these are enough to discuss for now.  In fact, it’s too broad for a blog essay, so I shall narrow it down.  One of City‘s sense of wonder aspects is robots, so let’s focus on how my perception of stories about robots changes over time.

In 1965 my knowledge of robots mainly came from SF movies like The Day the Earth Stood Still, Target Earth and The Jetsons, and the robot stories by Isaac Asimov.  It’s a rather limited view.  I don’t even know if there were any real robots in the world at that time, and if there were they were no more than toys.  And I certainly hadn’t read any histories of literature discussing the antecedents of robots like Frankenstein and The Golem.

When Clifford Simak was writing his robot stories in the 1940s, his only inspiration was probably other science fiction writers and their stories.  Robots were all speculation.  He had the play R.U.R. which coined the term robots, and Metropolis, the classic silent film from Germany, and he had Isaac Asimov, Eando Binder and Lester del Rey, and before the City stories were fixed up for hardback publication, he had the magnificent Jack Williamson story, “With Folded Hands.”  When City came out it won the third International Fantasy Award in 1953.  Other winners were Earth Abides (1951), More than Human (1954) and The Lord of the Rings (1957).  It was a well respected book.

In 2008, City is quaint and it would be very kind to just say the speculation is full of holes, but the story telling is still magical.  I look forward to every moment I can spend with it.  I like Jenkins like I like Godfrey and Charles, two butlers William Powell played in 1930s films.  If I could interview my 1965 self, even though he was a kid in junior high, he probably knew the speculation of the story was silly then.  The quality of the story telling held me then as it does today.  Simak if far from a great writer, and his prose is barely a step up from pulp fiction, but damn, he does have a lot of far out ideas in such a small book.

One of the reasons why The Golden Age of Science Fiction is 12 is because at that age you don’t know much about the world and everything you discover has impact.  Just the concept of building artificial beings is mind blowing.  Of course it’s not much different than wishing I could fly like Superman in terms of reality.  One of the things that has tarnished old science fiction stories is real science.  Robots have a reality in 2008 – yet their reality is far from science fiction then and now, but strangely I think science fiction robots have a better chance of finding their place in the real world than interstellar space travel, aliens or time travel – the other major motifs of early SF.

Science fiction robots have evolved in the years since 1965.  You have the philosophical replicants of Blade Runner, the charm of Commander Data on Star Trek:TNG, the cyborg tenacity of The Terminator, the cuteness of Wall-E, the comic duo of R2-D2 and C-3PO, the threat of the Cylons, the wise robotic aliens of A.I. When I read City today I see Jenkins in relation to all the robots I’ve met since.  He is a simple faithful servant, intelligent, but hardly more than a mechanical Mr. Jeeves.  Of course, if I owned a robot, I’d want a Jenkins.  Owning a Commander Data or even a Rachael from Blade Runner would be a kind of slavery.  Jenkins’ mechanical servitude is acceptable, but that’s a whole other world of speculation.

In 1965 just the concept of an intelligent machine was cool.  The possibilities were endless.  Soon after Jenkins I encountered Mike, the intelligent computer in The Moon is a Harsh Mistress, and then HAL in 2001, and the concept of artificial intelligence grew in my mind.  There is a chance I even majored in computers in 1971 because of those stories.  They were a far cry from the IBM 1620 I was programming with punch cards at the time.  Working with real computers taught me the limitations of science fictional computers.

When I read City today, I analyze Simak’s speculation about the future from his vantage of 1952 and earlier.  He pictured atomic power, private planes, helicopters and hydroponic farming causing such a societal paradigm change that cities were dissolved and people chose to live far from one another independently.  While this was going on, Simak imagined the development of robots and the uplifting of dogs.  His speculation of de-urbanization, or re-ruralization seems silly today, but it is elegant speculation.  Simak’s whole imagined future where humans disappear and are forgotten, leaving the Earth to intelligent dogs and robots is quite beautiful.  That holds up.

What my 56-year-old self needs is a 2008 novel about robots that is as ground breaking as City was in 1952.  This wished for novel needs to have the story quality of City so it remains in print until 2060 and later.  And I need to live to be a 109 so I can reread it and evaluate my sense of wonder one last time before I pass into oblivion.

7 thoughts on “The Golden Age of Science Fiction is 56”