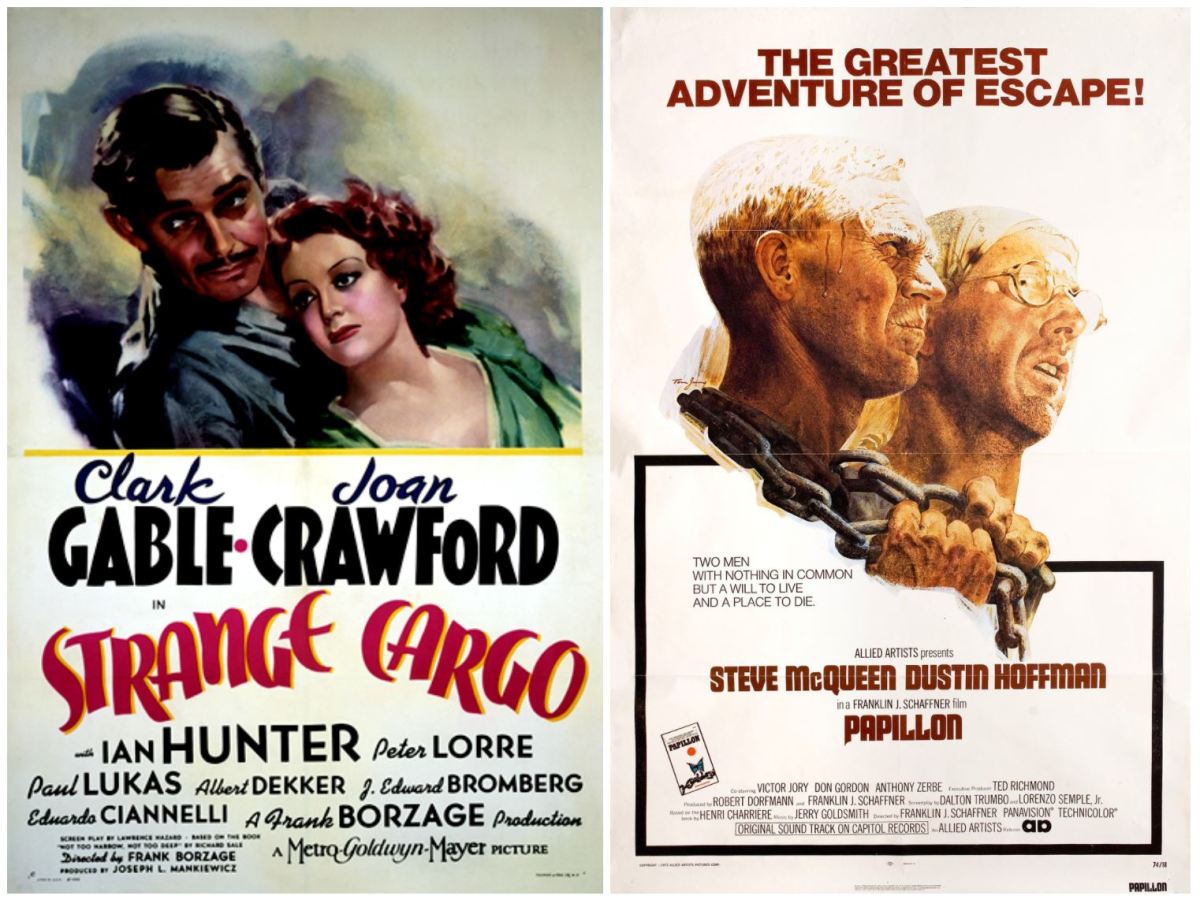 Movies often appear to teach us about history, unfortunately, we tend to remember their lies rather than their facts. Why do we prefer movie history over scholarly history? Why do we love glamourize characterizations of real people with fudged biographies? Yet, don’t we also relish that statement “Based on a true story” when the film starts rolling? Are believable lies more entertaining than historical facts? The easy answer is most moviegoers couldn’t care less about real history, they just want to react emotionally to a good story.

Until today, my only source of knowledge about the penal colonies in French Guiana came from fiction. In popular culture the French penal system in Guiana is remembered as Devil’s Island, but from Wikipedia I learned the penal colony of Cayenne was based on three islands off French Guiana and three locations on the mainland. The actual Devil’s Island only held about a dozen prisoners at any time, and maybe no more than 50 over its history according to one source. The Wikipedia entry was far more fascinating than anything I learned from watching any of the films about Devil’s Island I’ve seen.

The evolution of the French prison system would take many books to explain why France created the horrors of its Gulag in the New World. These terrors are painted with impressionistic cliches in movies because what moviegoers want is the thrills of prison escapes. The actual history of injustice is of little interest to mass audiences. Whereas the reasons why an enlightened nation would kill tens of thousands of its citizens with brutal torture should interest us far more than why a few men make an exciting escape.

My knowledge, like most people’s comes from a handful of books and movies. The most famous of which is the 1973 film Papillon based on the 1969 autobiography of Henri Charrière of the same title. Charrière claimed his book was 75% true, but researchers over the years have found more and more evidence to suggest it was mostly fiction, if not all. However, just the merest whiffs of the fading myths from Devil’s Island is enough to inspire writers and screenwriters, while they ignore volumes of meaty history. Aren’t we accepting the smell of the cooking over the meal?

I first watched Papillon as a movie rental in the late 1970s or early 1980s on VHS tape on a TV with a 25″ screen. I was in my late twenties. I regretted then not having caught it at the movies when it came out in 1973 because it was cinematically beautiful. It was also tremendously exciting. I liked both Steve McQueen and Dustin Hoffman performances. I had also loved Steve McQueen in The Great Escape (1963), one of the most exciting movies of my childhood. With both films I read the book based on them immediately after seeing the movie. Both films were about escaping prison. At the time I wondered if Steve McQueen had been typecast as a great escape artist. Papillon, like The Great Escape, impressed me by what the men endured in prison, and the efforts they made to escape. Looking back I realized that in the sixties when watching The Great Escape I wanted to escape my childhood, and fifteen years later when I saw Papillon I wanted to escape my job.

When I watched Papillon this week I wasn’t really interested in the Steve McQueen character at all, but sympathized with Louis Dega (Dustin Hoffman). At 69 I realize there are no escapes from life, but it must be endured to the end. The final scenes with Dega working his gardens and tending his pigs on Devil’s Island was something I could completely understand and relate. I do admit that visually the recreations of the prisons and Devil’s Island in Papillon look very much like the photos I’ve seen of the real places. The film and film locations are stunningly beautiful, and feel historical.

This time while watching Papillon I wondered about why the prison existed, why the cruelty, why the extreme inhumanity? How could they keep men in solitary for five years. How could any human survive that? I wanted to know the reality and history of this penal system. This time I knew the film was a caricature sketch based on a complex lie Henri Charrière sold the world based on his hyper realistic life experiences. Movies goers were only getting a few parts per billion of the real facts.

The first time I watched Strange Cargo (1940) was probably in the 1990s on Turner Classic Movies. It made an odd impression on me, but then Strange Cargo was an odd film for its time, an MGM’s take spirituality. The story is about Verne (Clark Gable) who escapes from the French penal system in Guiana with Julie (Joan Crawford), Moll (Albert Dekker) and other hardened criminals along with a strange Christlike figure named Cambreau (Ian Hunter). Cambreau is both mystical and supernatural.

These escapees weren’t on Devil’s Island, but one of the larger prison islands that had a civilian population – which is how a woman is included in party. Like in Papillon, the goal is to acquire a boat via bribery and make for the mainland. Both stories involve treacherous travel through a jungle and then an arduous sea voyage with minor characters dying along the way. In Strange Cargo, Cambreau helps each character who dies with a spiritual awakening. Both Verne and Julie resist Cambreau powers until they very end of the story by being hard independent individuals.

The first time I watch Strange Cargo I was more caught up with the escape story, and felt the mystical side of the tale to be a bit sappy. I was happily married, and worked in a university library. I liked my job and the people I worked with, but still I felt trapped by having to put in my 9-to-5 hours. Again, the theme of escape was the overriding motif that moved the story along.

Decades later, retired and freed from my sentence of work, I am much closer to death, and the mystical angle of Strange Cargo was far more appealing to me this time, even though I’m an atheist. And this time around I was far more sympathetic to M’sieu Pig (Peter Lorre), a pathetic creature so desperate for Julie to love him. Pig is a snitch, small and ugly, completely loathsome to Julie no matter how nice or helpful he is to her. Pig is the only character that Cambreau can’t help.

Strange Cargo doesn’t try to us teach history, and I think it’s a more successful because of it. Yet, Strange Cargo does preach another kind of truth, which I don’t believe, yet admired. Some of the greatest spiritual works of history have come from souls enduring prison and finding enlightenment. Strange Cargo is almost surreal in its black and white beauty.

Papillon gives us a story of survival, but Strange Cargo is about transcendence. Both are classic inspirations for stories, but like I said, when I was young I wanted escape, but at this end of my life I’m more interested in transcendence. As an atheist, I believe transcendence is only found on this side of death, and I could read that in Strange Cargo better than Papillon even though it was simplistic and heavy handed. However, this time I thought the spiritual thread of Strange Cargo was artistic, and moving.