I need some help. I’m trying to find out what writers influenced Robert A. Heinlein, Mark Twain, Jack Kerouac, Philip K. Dick, and Louisa May Alcott. Bookworms love to talk about their favorite authors, but do we ever research our favorite writers’ writers? I especially want to know what they read before their first successful books. 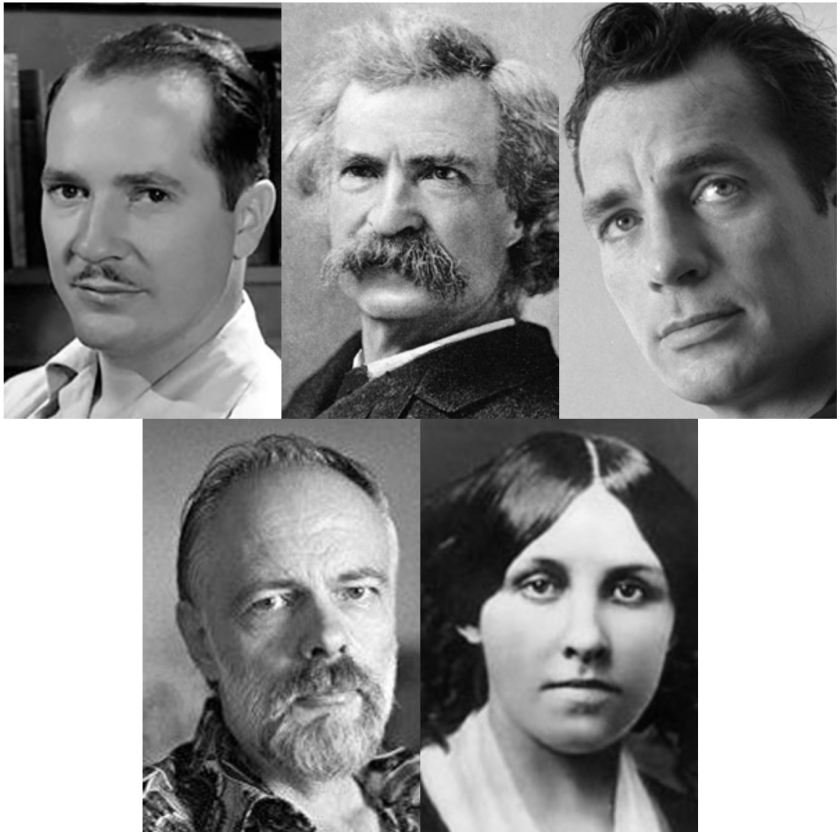 I believe much of my thinking was shaped by what I read. The five writers above are the authors I’ve read about the most. I’ve read many books about each of them. I don’t necessarily mean these are my favorite authors, but their lives have become compelling reading for me. I even wrote about these writers before in “The Ghosts That Haunt Me.” My poor memory has not retained exact details from their biographies. I do have some vague memories of what they read, but instead of spending a lot of time rereading those biographies I thought I’d post a query here. I assume some of y’all might know a lot about these writers.

The writer I remember best talking about the books that influenced him was Heinlein. He often mentioned H. G. Wells and James Branch Cabell. But then, Heinlein wrote a book Job: A Comedy of Justice (1984) which riffs off of Cabell’s Jurgen: A Comedy of Justice (1919). I also have to assume Heinlein loved Edgar Rice Burroughs and L. Frank Baum because of The Number of the Beast and his other “World as Myth” multiverse novels. Finally, I also have to assume Heinlein loved Jerome K. Jerome, because he includes references to Three Men in a Boat in my favorite Heinlein story, Have Space Suit-Will Travel. But this is a lot of assumptions. Does anyone know different about Heinlein? I have to wonder if Heinlein was influenced by Upton Sinclair or Ayn Rand.

Philip K. Dick is even harder. PKD was a voracious reader. My friend Mike found “List of Influences on Philip K. Dick” for me, but I’m not sure I trust it. The list cites quotes from Dick, but it seems like he’s putting on airs. I can believe A. E. van Vogt, because van Vogt was a major science fiction writer when Dick was growing up. And I might buy “The novels that influenced my writing when I was in my late teens and early twenties, were the French realistic novels…Flaubert, Stendahl, Balzac, et al…” because he mentions them more than once. And I can readily believe “I liked the short stories of James T. Farrell very much. They had a tremendous influence on me in the short story form” because of PKD’s short stories. He also said, “I was very very very influenced by Nathaniel West for a while…” which I can believe because I’ve read West. But why doesn’t he mention more science fiction writers since he wrote so much science fiction?  If you know more about what PKD read let me know.

I just can’t remember anything about Twain’s reading. Since he was born in 1835, his formative reading years would have been the late 1840s and 1850s. I know he skewered a lot of writers like James Fenimore Cooper. I don’t think Twain and Alcott liked each others’ work. We might assume Twain admired satirical writers like Swift, but I haven’t found anything to verify that. Alcott grew up knowing Emerson, Thoreau, and Hawthorne, but did they influence her? She loved the pulp fiction of her day.

I’ve read many biographies on Kerouac and I think I remember him liking Proust, Thomas Wolfe, and Louis-Ferdinand Céline. Again, I’m not sure. I can’t imagine Kerouac not being influenced by Ernest Hemingway and Joyce. Wasn’t the Beat Generation in reaction to the Lost Generation?

Searching Google for these answers is annoying. I have to constantly rephrase my query. When I finally asked: “What books did Jack Kerouac love to read?” I got Kerouac’s Top 40. But most of the other results were about the books Kerouac wrote. The same search didn’t work for the other writers.

I’m hoping this will reach fans of these writers and you might know what I want to know. Please leave a comment if you do. Thanks.