I was messaging a friend in South Africa this morning, Piet Nel, about reading old science fiction short stories in retrospective anthologies and best of the year annuals. Piet is reading through the Terry Carr’s Best Science Fiction of the Year series (1972-1987), but he doesn’t have them all. This morning’s message told me how he used ISFDB.com to find the stories in The Best Science Fiction of the Year #4 elsewhere. #4 was the first volume he didn’t own. For example, here are all the places “Born with the Dead” by Robert Silverberg has been reprinted. Piet already had four copies of that story in other anthologies. Piet was able to find all the stories #4, either in books he owned or online.

I thought I’d take the same approach to The Best Science Fiction Stories 1951 edited by Everett F. Bleiler and T. E. Dikty because I can’t afford to buy it. That annual came out the year I was born. By chance this month, I’ve already read two of them, “Born of Man and Woman” by Richard Matheson and “Coming Attraction” by Fritz Leiber when I listened to The Science Fiction Hall of Fame Volume One. [See the results of this game at the end of this essay.] 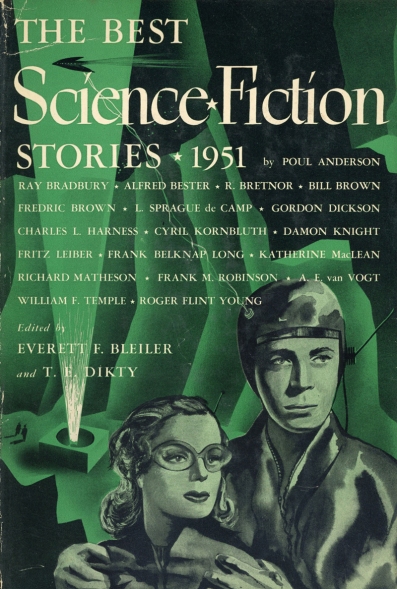 This morning I read an essay by James Jackson Toth, “Too Much Music: A Failed Experiment in Dedicated Listening” that resonated with me. Toth laments that streaming music is overwhelming him and he longs for the days when he had a limited collection of records he knew intimately. I feel the same way about science fiction. I’m not giving up on reading new science fiction, but my old mind can’t grasp much more new stuff. I’ve decided my specialty of knowledge will be science fiction published from 1946-1985. I need something to hang onto, and this will be it. Mostly, I chose this topic because I already know a bunch about it — why bother becoming a specialist in something other than what’s already crammed into your mind. But also, I’m attracted to this era because I enjoy talking with other folks that also love this era too.

This got me to thinking:

It’s not that I haven’t thought of these ideas before, and answered some of them in “The Best Science Fiction Short Stories.” That’s the most popular essay I wrote for the Classics of Science Fiction site. CSF is not a very popular, but that page has gotten 2,600 hits. Not many in the big scheme of things, but it suggests there’s a fair number of readers like Piet and I. Overall, I would guesstimate there are not that many fans of old science fiction short stories, probably much less than a thousand in the world, and we’re dying off all the time. I’m sure young folk would rather watch Black Mirror, Philip K. Dick’s Electric Dreams, Dust films, Short of the Week Sci-Fi, or The 7th Matrix for their short science fiction fix. I love these shows too, but I forget their details almost immediately.

Baby boomers were born 1946-1964 but I would think their formative reading years lasted until 1985. Only a small percentage of boomers got into reading science fiction, and for most of them reading science fiction was only a casual interest. I do know there are around 11,000 members to Space Opera Pulp, a group on Facebook for people who love covers to old science fiction magazines. Probably for most of them, that’s a minor nostalgic diversion. I wonder how many still buy, collect, and read old SF stories?

There are more anthologies than ever collecting the best short science fiction of the year, including one from the prestigious Best American Series. And there’s plenty of places that publish new short science fiction. I believe the readership is smaller today than we I was growing up, but the science fiction short story is still going strong despite the overwhelming popularity of media science fiction. I’d love if I could read and retain knowledge of all this new stuff, but I can’t. I try, but it’s a struggle to remember. Reading new stories from the past will also be difficult to remember, but reading them feels like I’m finding missing pieces of a puzzle I’ve been working on my whole life. Filling in those blanks are reinforced by surrounding memories, so that might help to learn new stuff.

And, I do find more and more pleasure nostalgically returning to old science fiction, and I don’t think I’m alone. Maybe I can keep it in my head. I think it is a mentally good thing to have a specialty to care for when aging.

Here are some sites I read by fans of old science fiction stories. (There are more, but memory limits me at the moment. Be sure and send me your link if you focus on this era of science fiction.)

These are the stories I have for The Best Science Fiction Stories: 1951 edited Everett F. Bleiler and T. E. Dikty. Links are to ISFDB. This goes to show how well some stories from 1950 have lasted, although I should admit that the anthologies I own them in were assembled decades ago. I guess I should admit that they are mostly forgotten stories.

Stories I Have in Anthologies

Stories I Have in Magazines

Stories I Don’t Have