Have you ever wondered why you watch TV? It’s kind of weird to think about how much we stare at screens. Have you ever analyzed what actually entertains you? Last night I had a friend over to start watching season 5 of House of Cards. I had watched season 1 with her but she leaped ahead through seasons 2-4 without me. As we watched Frank and Claire Underwood I was horrified by the show. Those characters were as depressing as Donald Trump, and I’m definitely not entertained by him. Our current prez has turned me off to all politicians both real and imagined. Then I remembered the movie I had watched the previous night, about angels. Now that was entertaining. And, I don’t even believe in angels. 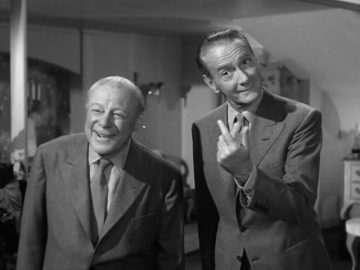 I suppose it’s rather odd for an atheist to enjoy movies about angels, but I do. I had watched For Heaven’s Sake (1950) with a couple of friends. My friends weren’t aficionados of old movies, so it was kind of them to hang out with me while I had such a good time. I had first seen For Heaven’s Sake decades ago and remembered it mainly for one scene and concept. Back in 2008 when I wrote “Angels in the Movies” I remembered that unique take on angels and wanted to see it again. It wasn’t available. Years later I saw it was out on DVD but the price was too steep. I didn’t buy it, but the urge to see it lingered. The other day I was in the mood for an old movie and saw For Heaven’s Sake was two dollars off, and clicked the order button. It really wasn’t worth $18, but it was cheaper than three people going to the movies. And I laughed out loud a great deal during its 87 minutes, so it was entertaining.

The reason why I remembered For Heaven’s Sake all these years is its unique take on angels. (Of course, the most unique is Angel-A (2005).) For Heaven’s Sake is about a little girl (Gigi Pereau) and boy (Tommy Rettig) waiting to be born, and two angels (Clifton Webb and Edmund Gwenn) trying to assist them. Every movie about heaven, angels, and ghosts have a different theory about how the afterlife works. In this one, kids exist in heaven as angels or angel-like beings before they are born on earth. I thought that a neat idea. Sort of a version of reincarnation. However, seeing the film again last night I heard a line that suggests a problem. Evidently, little angels are created in heaven and begin aging before they are reborn in our realm. If they have to wait too long to make it to Earth they mentally develop in heaven. Clifton Webb tells the little girl she doesn’t want to become a child prodigy and compose music at age four as if that was something nasty.

Many anti-abortionists believe souls are conceived when human eggs and sperm hook up. This movie, as does the theory of reincarnation, suggests that souls exist before birth. Most scientists and philosophers have abandoned the concept of the soul. I like to use the word soul as a label of our sentient/self-aware mind, which I believe develops well after birth. Sentience is a difficult concept, especially if you think about animal rights and artificial intelligence. Stories about angels and ghosts are really speculation about non-human beings, souls, immortality, reincarnation, mind transfers, multiple dimensions, and other philosophical questions. They explore some of the same concepts that science fiction explores.

However, most movies about angels are light-hearted and fun, and this one was too. I tend to over psychoanalyze everything, but then that’s entertaining to me.

There’s a problem with angel movies. Originally, as told in The Bible, angels were another species of beings that existed with God before creation. Often angels are God’s henchmen, doing his dirty work – his enforcers.  In modern times people believe when you die you become an angel. I don’t know when that idea got started. Two movie classics, It’s A Wonderful Life (1946) and The Bishop’s Wife (1947) seem to be in between on this idea. Clarence has to earn his wings, but he remembers Mark Twain.  Dudley remembers a lot of human history, but I’m not sure if it was from human experience.

In Here Comes Mr. Jordan (1941), are we dealing with angels, ghosts, or former humans now residents of heaven? The film has a hierarchy of bureaucratic workers who manage heaven and its potential residents. Are they angels? Maybe our culture has repurposed any occupant of heaven to be angels. Me, I prefer angels to be different from humans. Movies like Wings of Desire (1987) (remade in 1993 as City of Angels) have angels envying humans because we can experience things they can’t. Isn’t it ironic that we want to go to heaven, but angels want to come to Earth and live like us? I’ve always loved the title of this book PKD interviews, What If Our World Is Their Heaven. Even though there is great suffering on our planet, what if Earth is the hot destination for the advanced soul? 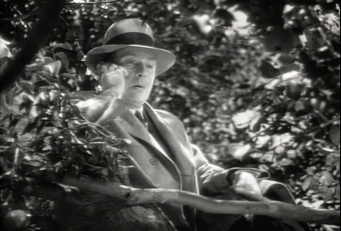 And what is Mr. Brink in On Borrowed Time (1939)? Is he death? Or an angel of death? Is he related to the specter of death in The Seventh Seal (1957)? I like Mr. Brink far better. He’s far more philosophical and worldly, and not a strange biblical creature that tags us out when our time is up. Death is played even more suavely by Fredric March in Death Takes a Holiday (1934). In it, Death envies us and tries out being human for a while. In For Heaven’s Sake, Clifton Webb the angel is corrupted by taking human form. Dudley, in The Bishop’s Wife, is also tempted to become human because of Loretta Young.

In the world of Topper (1937) Cary Grant gets to play a ghost. Strangely, he has some of the same powers as Dudley, the angel he played in The Bishop’s Wife. I think that might be why people are confused by ghosts and angels, they often have similar magical abilities in stories to teleport, appear and disappear, and watch people while invisible. Most of the time angels in movies don’t have wings, at least not like John Travolta in the 1996 film Michael. My favorite fun ghosts are Horatio Prim (Lou Costello) and Melody Allen (Marjorie Reynolds) in The Time of Their Lives (1946), where Abbott and Costello are separated by the veil of death. Do Horatio and Melody convert from ghost to angel when released from their curse?

I wonder why I love movies about angels so much? Generally, I’m not fond of fantasies. I prefer science fiction, but as I’ve written elsewhere, science fiction is a modern substitute for religion. When you think about it, religion, fantasy, and science fiction are fun forms of speculation about what’s possible in reality.

Which makes me wonder if House of Cards is too realistic? I loved Breaking Bad, which was also very realistic, and I cared about Walter White, even though he became a monster. Frank and Clarie are monsters I want burned at the stake. We switched from House of Cards to Better Call Saul and I immediately realized why I liked it better. I care about what happens to Jimmy McGill, Kim Wexler, and Mike Erhmantraut. I couldn’t care less about Frank and Claire. In every scene they were loathsome.

Maybe movies about angels are inherently likable because their stories are about caring about people. Angels are usually guardian angels in most stories. Maybe that’s why people like the concept of angels – they love the idea that someone is watching over them. (Of course, if you think about that, that’s an invasion of privacy. The next time you take a moment out for onanism, just think about what beings might be watching. It does help to be an atheist sometimes.)

I still don’t know why I love movies about angels. If you’re a perceptive reader you might have noticed that most of my favorite angel movies are old, and in black and white. If you’ve seen these films you know they have a certain feel. Maybe I just love the vibes of B&W 1930s and 1940s. I’m not sure I find that same vibe with modern shows. When we watched Big Little Lies I was caught up in the mystery and story, but I found the characters revolting, until the very end, when the show provided a feel good ending, and the characters became likable.

I wonder how Big Little Lies would have felt if it had one additional character, Dudley the angel from The Bishop’s Wife to help those women. Were we better people back in the 1940s?

I’m reminded of this quote from Abraham Lincoln:

We are not enemies, but friends. We must not be enemies. Though passion may have strained, it must not break our bonds of affection. The mystic chords of memory will swell when again touched, as surely they will be, by the better angels of our nature.

Maybe just the idea of angels are the better angels of our nature. Frank and Claire Underwood have no better angels in their nature. And do we when we watch them? My wife has always hated many of the modern TV shows and movies I love because I like stories about complex characters which often means unlikable characters. As much as I hate Donald Trump, I’m sure even he has a better angel in him somewhere. However, watching the nightly news I wonder if all our better angels have flown away to another planet.

I recommend watching On Borrowed Time, a richly complex film, showing both our better angels and worse devils of our nature. And then ask yourself, “How much have we changed since 1939?” Maybe not that much. Is Mr. Smith Goes To Washington that much different from House of Cards? Our entertainment is more explicit, violent, and sexual – but have we really changed? Liberal philosophy has made us better people in many ways, more conscious of the diversity and equality of being fully human. And that’s often reflected in our entertainment.

I think something has been lost. I can’t say what. I believe conservatives are looking for it too, but their nasty belief that the end justifies the means suggests they have already lost their souls. What we watch on TV is revealing. Do people love House of Cards because they despise our government? It’s probably Pollyanna of me to suggest that what we watch does affect us.

Even though I’m an atheist maybe I love movies about angels because I believe humans could be more angelic, even without the fear of God.

5 thoughts on “My Favorite Angels and Ghosts”