My calculations all began when I wrote about the science fiction of 1966. Starting with ISFDB.org, and hyperlinking over to the World’s Best Science Fiction: 1967, (the 1967 volume covers stories from 1966), I researched each story on the internet. Reading about those stories made me want to read (or reread) the actual stories. So I checked ABEBooks.com for a copy World’s Best Science Fiction 1967. The cheapest edition was a paperback for $6.50, or $10 for a hardback without dust jacket (prices include shipping). Too much for me, considering their condition. 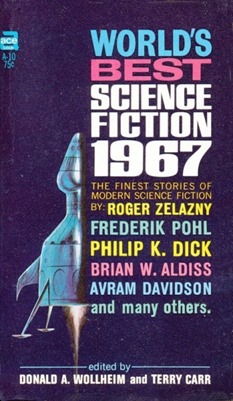 Here is the table of contents for World’s Best Science Fiction: 1967:

I remember owning this paperback back in the sixties as a teen, and I probably read it then. Only four of the stories have stuck in my memory though. Writing about 1966 made me want to seek a deeper understanding of that year. Yesterday, I read “The Keys of December” by Roger Zelazny. I was both impressed and moved. It’s a story about the ethics of geo-engineering a planet with emerging life. I don’t remember thinking about such topics when I was young, but I do now. I guess I wasn’t ready. I also loved how Zelazny told his story. It resonated with the genes that make me love science fiction.

Reading “The Keys of December” made me want to read more from World’s Best Science Fiction 1967. What’s driving my current interest in science fiction is akin to being a science fiction archaeologist. Every story is a clue to how we thought in 1966. Instead of reading science fiction to imagine the future, I’m reading science fiction to understand my past, and why we all grew up wanting and fearing the futures we do. Finding each story is like digging up another artifact. On some days I think having copies of all the science fiction magazines is the way to do my research. That’s possible with digitized pulps on the net. On other days, I think just collecting the annual best-of-the-year anthologies is all I need. Then I wonder if buying a couple dozen retrospective anthologies would provide all the historical evidence I should read.

Then it occurred to me to ask how many of these stories I already own. I found “The Keys of December,” “We Can Remember It for You Wholesale,” “Day Million,” and “Nine Hundred Grandmothers.” Four out of twelve is not bad.

How many major annual anthologies have there been? If you start counting with The Great Science Fiction Stories Volume 1 (1939), edited by Isaac Asimov and Martin H. Greenberg, and assumed just one anthology a year, the minimum collection would be 77 volumes.  (There are many years with several annual anthologies, especially 2016.) Let’s guestimate the average annual anthology has 15 stories, that would mean 1,155 stories. If I could find large retrospective anthologies with more than 25 stories per volume, I could cut down 77 to 46. The Big Book of Science Fiction edited by Jeff and And VanderMeer had over a hundred stories, two of which were from World’s Best Science Fiction: 1967. (“Nine Hundred Grandmothers” and “Day Million.”) I need just a dozen books that size.

So I went shopping on ABEbooks.com. I got “Light of Other Days,” and additional copies of “The Keys to December” and “Day Million” by ordering The Arbor House Treasury of Modern Science Fiction edited by Robert Silverberg and Martin H. Greenberg ($4.20). The best way to get “Behold the Man” was by buying The Science Fiction Hall of Fame Volume III, edited by Arthur C. Clarke and George W. Proctor ($8.99). That got me three stories I mentioned in my essay from 1966 that wasn’t in the Wollheim/Carr annual. The cheapest way I found “For a Breath I Tarry” was by buying Science Fiction: A Historical Anthology, edited by Eric S. Rabkin ($3.48).

For $16.67 I got all the stories I wanted, plus several other great 1966 stories, and a huge number of SF stories from over the last two hundred years. Compared to spending $10 for the World’s Best Science Fiction: 1967 in hardback, $16.67 was a great bargain. I decided I didn’t need “Bircher,” “Bumberboom,” “The Wings of a Bat,” “Amen and Out,” and “The Man from When.” They aren’t often reprinted, and I’ve never heard of any of them since. Which suggests that not all stories in the annual collections are worth remembering. How many great shorter works are produced each year in science fiction? If we say 10, then that’s 900 stories since 1926. That’s not an impossibly large number to consume. Reading three a day, would let me finish in a year. Such a pursuit would be a fascinating education in science fiction evolution and history. 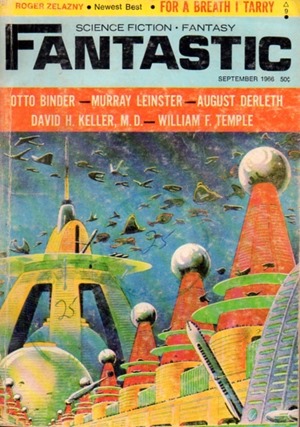 I’ve always believed the heart of science fiction is the short stories that appear in the science fiction magazines. That’s ninety years of stories. Theoretically, it would be possible to collect (especially with pulp scans on the internet) all those issues of Amazing Stories, Wonder Stories, Astounding Stories, Planet Stories, Unknown, F&SF, Galaxy, If, Analog, Fantastic, Asimov’s Science Fiction, and even read a good fraction. But that would also be more reading than I have time left in my life.

Then I wondered, would it be possible to collect all the annual anthologies and read them. Would reading the yearly best of the best be worth my time? The 77 volumes since 1939 is not a huge number of books. I wouldn’t want to read a steady diet of old science fiction, but I could finish that pile of 77 books in a decade. 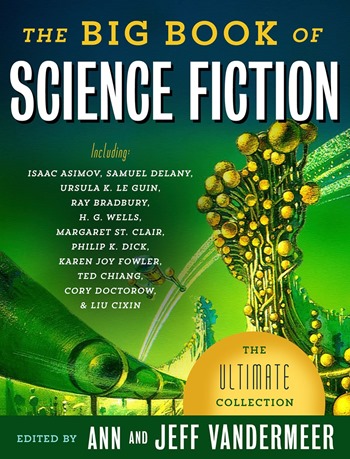 Then I wondered about the mathematics of retrospective anthologies. I already own The Big Book of Science Fiction edited by Jeff and Ann VanderMeer. It has over one hundred stories. I could read it in a year. What if I read one large anthology a year that collects the best science fiction short stories ever written, how many years would it take before I felt I had read the greatest short works of the genre?

I’ve already read countless SF stories in my life, yet I don’t remember most of them. That’s because I consumed science fiction, like eating M&Ms. What if I studied science fiction like I used to study American and English literature in college? Could I create a taxonomy of science fictional themes? I’ve been reading science fiction long enough to see it evolve. For most readers, science fiction is merely entertainment. Exciting stories well told. But I’m starting to see that the science fiction writer has a unique job in society.

Their task is to speculate about possibilities that science has yet to thoroughly explore. Most of the time science squashes these speculations, but not always. Over the centuries many writers speculated about building flying machines. We don’t think airplanes are science fiction anymore because aircraft are mundane now. At one time, speculation about flying machines was science fiction. I wonder how many science fiction stories written fifty years ago have either been shot down by science, engineered into reality, or still a realistic speculation? I also wonder how many science fictional ideas we still want to come true? We’ve been wanting colonies on Mars for a very long time now. Ditto for intelligent robots. Will that change once we’ve been to Mars or lived with AI? What will science fiction writers write about once we’ve settled the galaxy?

That’s why I wonder about numbers. How many science fiction stories have been written? How many unique themes have been developed. How many variations on each theme have emerged? How long does an idea take to die once science has covered it’s territory?

Think about the story “A Rose for Ecclesiastes” by Roger Zelazny, first published in F&SF (Nov. 1963). It was one of the last great stories about life on Mars. On July 15, 1965, Mariner IV flew by Mars, and 21 grainy pictures of the red planet forever killed any hope of finding Barsoom. I remembered when that happened. I was so disappointed. Mars looked like the Moon. Yet, we still want to read stories about Mars like we imagined it before Mariner IV. People haven’t stopped reading The Martian Chronicles. Writers and publishers still put out books like Old Mars, edited by George R. R. Martin and Gardner Dozois. Science fiction isn’t only about speculation, it’s also about the dreams we want to dream. When does science fiction become fantasy?

How many people will go to Mars if Elon Musk builds the rockets to take them to the red planet? Where did Elon Musk get his desire to go to Mars. Will there actually be a hundred people willing to go, even if they think they might die, or never return to Earth? It’s one thing to read science fiction, its another thing to actually live it. Is reading hundreds of old science fiction stories a way to understand why?

11 thoughts on “The Calculus of Collecting Science Fiction Short Stories”