Fifty years ago tonight, the second episode of Star Trek, “Charlie X” was first shown on NBC. As usual, follow the link to Wikipedia’s excellent summary. An even more extensive history is at Memory Alpha.

I enjoyed “Charlie X” more than I did “The Man Trap,” both in 1966 and 2016, but not by much. The story is rather simple. The Enterprise rendezvous with the Antares to take on a passenger, a young man named Charlie Evans, who has been raised by aliens. He knows little of human ways. Charlie is friendly and anxious to please, but when his feelings gets hurt, he has god-like powers to punish his tormentors. On the Enterprise he meets a woman for the first time, and is smitten with her. Things don’t go well.

Even in 1966 this plot seemed borrowed. Stranger in a Strange Land was fresh in my memory. Charlie, like Valentine Michael Smith, had been raised by aliens, never seen girls before, and had god-like powers. They both could make people disappear with a thought. I had also seen “It’s A Good Life” on The Twilight Zone, based on the famous short story by Jerome Bixby. It featured a young boy with god powers who would do horrible things to people who displeased him. Much like Charlie. The story also reminded me of “The Sixth Finger,” one of the early episodes of The Outer Limits, about a man who artificially evolves to have, yes, you guess it, god-like powers. 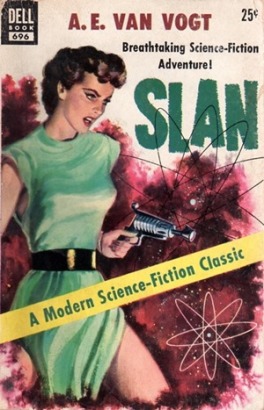 Science fiction has a history of aliens with immense powers, or evolved humans with superpowers (Odd John, Slan, The Hampdenshire Wonder). But are god-like powers even possible? For humans, aliens from the sky, or even gods? Charlie makes the Antares instantly disappear with a thought, while light-years away. Is this science fiction or fantasy? Did Gene Roddenberry really think humans had untapped psi-powers? Did Heinlein? As a kid I took things literally, and imagined such things might be possible, but I don’t anymore.

As I’ve written in earlier essays about Star Trek, I have to watch the show and judge it by science fiction and by allegory. Gene Roddenberry, who wrote the original story for “Charlie X” was an atheist. Star Trek often dealt with aliens with various kinds of god-like powers, and generally Captain Kirk is pitted against them. Are these stories allegories showing humans v. gods?

Sometimes we’re given stories in science fiction where the goal is to evolve to the next level – i.e., Childhood’s End, or 2001: A Space Odyssey. But I never liked those stories because they reject normal human existence. Who really wants to have powers like Charlie Evans or Valentine Michael Smith? I now think of these stories as philosophical tales rather than science fictional speculation, which I did as a kid. Isn’t “Charlie X” a rejection of God? Who wants to be friends with someone who can punish you with a thought? Would you even want such a person for a father figure?

Aren’t ESP powers a kind of evil? Aren’t ESP powers a Pandora’s Box we should never want to open? If you could do something with a thought, would you ever learn how to do anything for real? But what is the science of thought power? There’s none. It’s wishful thinking. Any reality where thoughts had such powers would be less than real. Like a dream, or computer simulation. When it comes down to it, don’t we actually need the limitations of reality? Remember The Matrix movies, where Neo learns earlier versions of the Matrix failed because existence was too easy and perfect.

Why did Heinlein accept the powers, but Roddenberry reject them? Why do so many crave the superpowers of superhero comics? The two classic science fiction novels by Alfred Bester, The Demolished Man and The Stars My Destination, deal with telepathy and teleportation. Would you really want either power? Honestly? Have you read Dying Inside by Robert Silverberg? Telepathy is a curse.

Are there any super-powers worth having? If you could fly, and no one else could, wouldn’t that be psychologically isolating? Even being gifted is hard on most kids. Being absolutely beautiful or sexually irresistible has its downfalls. We don’t want to be average, but we don’t want to be outliers either. Athletes who break records would find it disappointing if they had no real challengers.

If you’re too far from the norm you risk becoming another species. And on Star Trek, the aliens that humans have the most contact with are the ones that are like us – Vulcans, Klingons, Romulans. Of course that’s due to needing human actors. Could Captain Kirk be pals with a Horta, from the “The Devil in the Dark?” Once they learn the creature is only protecting its young, we relate to that, and accept it. Isn’t the whole diversity movement about realizing we’re all the same, and differences shouldn’t isolate us? I could be friends with a Horta if we found something in common – for example, like talking about science fiction. Have you ever wondered if aliens on other worlds have science fiction?

The crew of the Enterprise liked Charlie Evans as long as he was acting human. When he used his powers they feared and hated him. What does that say about us being friends with god-like beings? Was that the intended message of “Charlie X?” It’s the message I got. In the end, Charlie Evans wanted to stay with the humans, and he wanted to be human, but his powers corrupted him. Charlie had to return with the aliens that raised him.

So what’s the lesson here? Ultimately, both science fiction and allegories have something to teach. In 1966, I expected science fiction to explore actual possibilities. At the time I accepted FTL travel and matter transmitters, but I had problems with lots of the plots. Now that I’m older, I see in 2016 that Star Trek was seldom scientific speculation about the future, but often allegories about the present.

If “Charlie X” wasn’t a dig at God, who or what was it satirizing? I wonder if it was Age of Aquarius hippies, Transcendental Meditation, Aldous Huxley, Timothy Leary, psychedelic drugs, and other 1960s movements that promised to take people to states of higher consciousness. The kind of people who were wanting to be like Valentine Michael Smith. The kind of people who read Slan and hoped they would be one?

I watch old episodes of Star Trek to fathom science fiction in 1966. I was fourteen then, and didn’t comprehend all that science fiction could be, or was trying to be. I was a gullible kid who wanted the wonders of SF to be possible. I think some of it was written to promote space exploration. On the other hand, I think most of science fiction was personal commentary on culture by quirky writers like Philip K. Dick and Kurt Vonnegut. Gene Roddenberry wasn’t that different from Rod Sterling. Star Trek eventually developed a reputation for promoting a utopian view of the future. That might be true starting with Star Trek: The Next Generation, but I haven’t started rewatching it yet. So far, I see no utopian aspects of the Federation in the original series.