Off the top of your head, how many different versions of Sherlock Holmes can you name? This year I bought The Complete Sherlock Holmes: The Heirloom Collection on Audible – over 58 hours of the originals stories. There’s also the PBS show Sherlock, and the CBS show, Elementary. I also saw Mr. Holmes at the theater, about Sherlock being 93 and losing his memory.  And on my local over-the-air broadcast TV channel I can often catch the old Basil Rathbone movies. But this barely scratches the surface of Holmes adaptations. If mania for Sherlock Holmes keeps progressing, soon all TV shows and films will feature a version of the famous sleuth somewhere in their casts.

Has Sherlock Holmes become the primary archetype for the deductive detective? Does every mystery writer hope to create a series about a brilliant mystery solving individual that will one day be reinvented, reinterpreted and reincarnated like Sherlock Holmes?

Who is the next most famous character that has gotten this kind of attention? Off the top of my head comes Ebenezer Scrooge. How many movies, television shows, books and cartoons have retold his story? But the number of movie actors who have played Ebenezer would make a large dinner party, compared to the small convention center it would take to host all the movie and television actors and actresses that have played some variation of Sherlock Holmes.

And poor Ebenezer Scrooge appeared in just one novella by Charles Dickens, whereas Holmes was featured in four novels and 56 short stories by A. Conan Doyle. And how many other writers have used Holmes for a character? The second most famous character I can think of is Tarzan, whose adventures were chronicled in twenty-five novels by Edgar Rice Burroughs, and countless other novels and stories written by admirers. Tarzan has had almost as many film adaptations as Sherlock. This summer, we’ll get a new film, The Legend of Tarzan. Tarzan has also appeared in a number of television series—maybe not as many as Sherlock and Watson, but quite a few. Tarzan also inspires pastiches and imitations, and when I was growing up, far more kids pretended to be Tarzan than Sherlock. 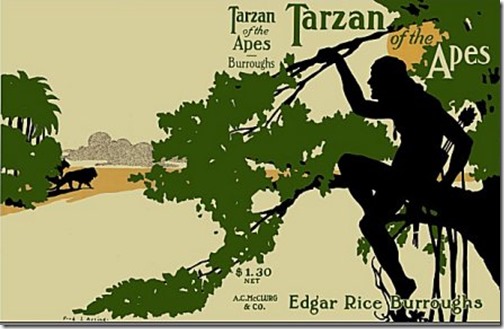 Haven’t Holmes, Scrooge and Tarzan become their own archetypes?

What makes my head hurt is to ask: Who is the most famous female character that readers and watchers love the most? I would pick Elizabeth Bennet, but she doesn’t even make AMC’s “50 Greatest Female Movie Characters.” Nor does she make IMDb’s “100 most iconic females characters in TV and cinema.” She’s only #53 in Buzzfeed’s “Women in Film: 70 Memorable Female Characters.” But at Ranker, Elizabeth Bennet is currently at #1, but this list is limited to literary characters. I guess my taste in fictional women is much different than other folks. However, Pride and Prejudice is often listed as one of the most popular novels ever read, and has been made into movies and television series many times. Not only that, but the novel has spawned an ever-expanding list of published sequels and an endless list of fan fiction variations. Plus, Elizabeth Bennet and Mr. Darcy are the archetypes that has inspired an army of romance novel writers over the last two hundred years.

Who else? I’m sure my readers can think of obvious choices I’m totally forgetting. Superman and Batman, Kirk and Spock, The Doctor—but what about more realistic people? And what about characters based on real people. How many movies, television shows and books have been based on Wyatt Earp?

And are you noticing a trend? Most of these characters aren’t very real. I’ve read articles wondering if Holmes is a psychopath or sociopath. Does it help to be inhumanly abnormal to attract so much fascination?

How many characters have appeared in all formats of fiction, including books, movies, television series, graphic novels, comics, radio shows and games? It can’t be that many, can it?

One way to quantify this thought experiment is to name a character, and then make a list of all the writers that have used that character in a book, story, screenplay, play, radio play, comic, newspaper strip, graphic novel, computer game, etc. I think Sherlock and Dracula would have very long lists. Tarzan might come in third. I still think Elizabeth Bennet might be the top female character. (But two people have left comments suggesting Jane Eyre and Jo March, which are good choices.)

11 thoughts on “Who are the Most Reinvented, Reinterpreted, Reincarnated Characters in Fiction?”