There’s a famous cartoon where scientists ask a supercomputer, “Is there a God?” And the machine replies, “There is now.” Humans need to get their act together before we face the judgment of AI minds. In recent months, many famous people have expressed their fears of the coming singularity, the event in history where machines surpass the intelligence of humans. These anxious prophets assume machines will wipe us out, like terminators. Paranoia runs deep when it comes to predicting the motives of superior beings.

Let’s extrapolate a different fate. What if machines don’t want to wipe us out. Most of our fears over Artificial Intelligence is because we think they will be like us—and will want to conquer and destroy. What if they are like famous spiritual and philosophical people of the past—forgiving and teaching? What if they are more like Gandhi and less like Stalin? What if their vast knowledge and thinking power lets them see that homo sapiens are destroying the planet, killing each other, and a danger to all other species. Instead destroying us, what if AI minds want to save us? If you were a vastly superior being wouldn’t you be threatened by species that grows over the planet like a cancer? Would you condemn or redeem?

But what if they merely judged us as sinners to be enlightened? 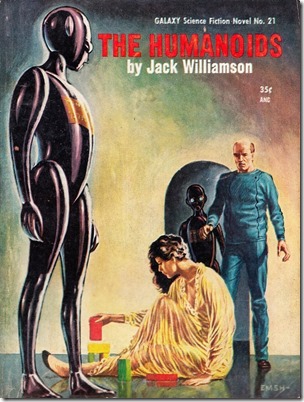 I’m currently rereading The Humanoids by Jack Williamson. In this story robots create the perfect Nanny State and treat us like children, keeping everything dangerous out of our hands. In many science fiction stories, AI beings seeks to sterilize Earth from biological beings like we exterminate rats and cockroaches.

What other possible stances could future AI minds take towards us?

Shouldn’t we consider making ourselves worthy before we create our evolutionary descendants? If intelligent machines will be the children of humanity, shouldn’t we become better parents first?