Hollywood obviously loves the science fiction of comic books, but why doesn’t it also love the science fiction of novels?  Admittedly, Hollywood doesn’t make films of all popular literary novels either, or mystery books.  Hollywood releases about 500-700 films a year.  Russia and China is in a similar pall park.  India produces about a 1,000 flicks each year.  It’s hard to get exact numbers.  Figures are also hard to find for the number of novels published each year, but I’d guess between 50,000-75,000 from numbers I’ve seen. 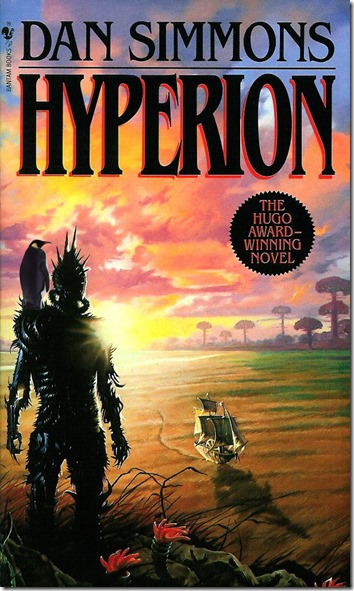 Obviously bestsellers like The Hunger Games do get their attention.  But science fiction novels that merely win the Hugo or Nebula awards don’t garnish enough notice by producers with money to spend.  All my life I’ve heard stories about Hollywood sniffing around certain famous science fiction novels, even buying the rights, but they seldom get a film through production.  Of course, that’s also true of all kinds of books and screenplays.  The process is quite an obstacle course.

I’m sure I’m like tens of millions of bookworms out there who wish Hollywood would make movies out of their favorite books.  The trouble is, unless ten million bookworms are all wishing for the same book, Hollywood isn’t interested.  Dune by Frank Herbert is probably one of the most famous science fiction novels ever, and it’s gotten the film treatment twice and there are rumors filmmakers want to try again.  Hollywood isn’t against trying to turn SF books into gold.  Just look at what they’ve done with Tolkien and Rowling.  Or the success George  R. R. Martin has had with HBO, or the new series based on the Outlander series.  Hollywood knows bestsellers can make big hits, but they also know they need the right book.   Producers know series books work better than single volume stories.  Series show fan commitment.   Yet, some popular series like The Golden Compass crashed and burned at the movies and none of the sequels were filmed.

Also notice, those stories from Tolkien, Rowling, Martin and Gabaldon weren’t science fiction either.  Box office favors fantasy.  Hollywood seems to love Philip K. Dick but few other science fiction writers.  Ender’s Game didn’t make that much of a splash with worldwide audiences, so I wonder if we’ll ever see Speaker for the Dead on the big screen.  David Brin was blessed by Hollywood when they made The Postman, so why haven’t they tried The Uplift series?  Heinlein got decent notice with Starship Troopers and The Puppet Masters, but other than talk all his other novels are ignored.  Heinlein should get some credit for every space marine type film though.  Clarke made it huge back in the 1960s with 2001: A Space Odyssey but why didn’t Hollywood try to win again with one of his other novels?  Childhood’s End would seem like an obvious choice for the big screen.

I guess the question becomes:  What science fiction novels deserve the Hollywood treatment?  Which great science fiction stories have the potential to enchant tens of millions of people?  Or even a hundred million?  As fans of our favorite books, we have to be honest with ourselves, do the books we love have the potential to be loved by a significant percentage of the population?  I love a lot of small films that probably don’t get more ticket buyers in the theaters than a modest bestseller.  Are there classic science fiction novels that could be filmed within the budgets of independent filmmakers?

My favorite science fiction novel is Have Space Suit-Will Travel by Robert A. Heinlein.  It was announced in 2010 that Harry Kloor had adapted HSS-WT for the screen, but the last word on the project was it was still in development.  I can’t find any recent news, so I assume the project is dead.  This Heinlein story could have been filmed relatively cheap, and it does have a great fan base. 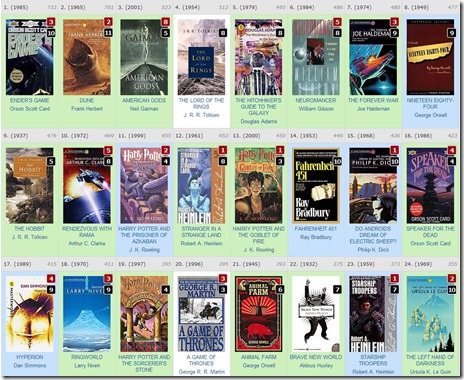 Looking at Worlds Without End list of most read books it’s interesting that among the top 24 books, 15 have been filmed.  These are both SF and fantasy.  Of the ones not filmed, they are:

I’d like to see films of all nine of those books.  The next 24 books, only 12 have been filmed, leaving: 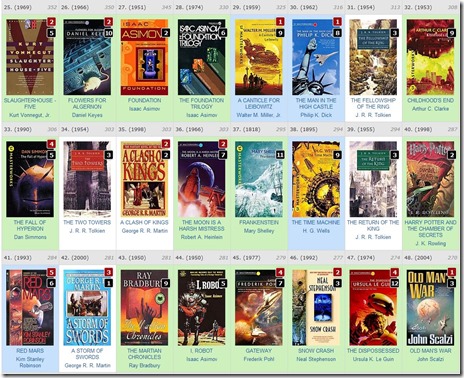 More great science fiction books that need filming.  In the next 24, only 11 have been filmed, leaving: 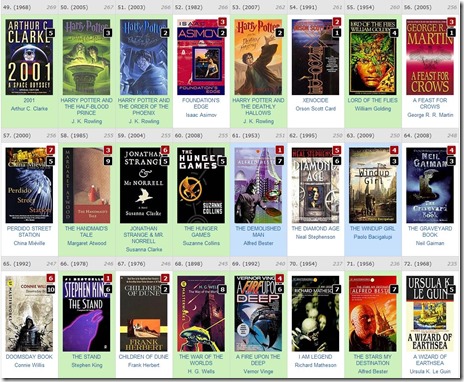 If you’re paying attention you’ll notice that many of these books are part of a series, something Hollywood loves.  And these books are among the most popular SF/F books read right now.  Because so many have been filmed, it suggests that the others might be film worthy too.  If you read the entire list at Worlds Without End you’ll see that many other popular books have been filmed, but more that haven’t.  But what about less popular science fiction books, ones that are the real classics of the science fiction genre?

City by Clifford Simak is a book that is probably not well known by young science fiction fans today, but it was much loved when I was growing up.  City is a fix-up novel of several short stories, so it would be hard to film, but it’s theme ties them together so wonderful that I wish they could make a film out of it.  The gimmick is humans no longer live on Earth and all that’s left are intelligent robots and uplifted dogs, who tell stories about humans they used to know.  I can’t believe a creative screen writer couldn’t do something with such a fantastic idea.

Sadly, so many great science fiction novels of the past have become dated not only by science, but by changing attitudes.  I think it would be extremely hard to film More Than Human, the great classic by Theodore Sturgeon.  It feels like something Carson McCullers would have written after hanging out with a bunch of New Age hippies brought up on reading Stranger in a Strange Land.  Many people have dreamed of seeing Stranger in a Strange Land at their favorite movie theater, but I just don’t think it will ever happen.  I’d love to see an extremely true-to-the-novel version, but I think seeing Stranger on the big screen would only make it all too obvious how fucking weird it really is.  I’m not sure an army of psychiatrists and English professors could make out what Heinlein is unconsciously saying with this novel.

If they had made Stand on Zanzibar as a movie back in 1968, it might creepily look like the news today.

I wish Pixar would make Hothouse by Brian Aldiss, because it’s so damn dazzlingly beautiful to imagine.  And I think they should give the film the American book title, The Long Afternoon of Earth.   I think people leaving the theater would be saying “WTF!” to each other, but it would haunt them for days to think about the far distant future and what might become of humanity.

Because people are so paranoid about robots and artificial intelligence, I think a hit could be made from The Humanoids by Jack Williamson.  Although I’d be afraid Hollywood would turn it into a shoot-em-up like they did I, Robot.  It’s very disappointing to me that Hollywood sees science fiction as a source of video game violence to put on the screen, and make every plot about saving the world.

It seems to me that Ready Player One and Little Brother should be obvious movie hits.

If they could pull it off, Lord of Light by Roger Zelazny might generate some good word of mouth movie buzz.  And what would America think of the dark vision of Dhalgren by Samuel R. Delany?  Is there the film technology to pull off Uplift series by David Brin, or make The Rediscovery of Man stories by Cordwainer Smith, or Eleanor Arnason’s uber-exotic The Woman of the Iron People?  And what would modern people make of the feminist science fiction novels like The Female Man by Joanna Russ, The Left Hand of Darkness by Ursula K. Le Guin, Herland by Charlotte Perkins Gilman, A Door Into Ocean by Joan Slonczewski, or Dawn by Octavia Butler?

And is it too late to film such vast comic weirdness as Mindswap and A Dimension of Miracles by Robert Sheckley?

I could go on and on and on, because science fiction has so many wonderful, far out,  sense of wonder inspiring stories that should be filmed.  And I’ve only been talking of novels.  I’d film “A Rose for Ecclesiastes” by Roger Zelazny even though it’s clearly scientifically wrong and outdated.  There are probably hundreds of great SF novelettes and novellas out there would would film perfectly for a two hour movie.  The next Heinlein movie should be “A Menace from Earth.”

12 thoughts on “Why Hasn’t Hollywood Made More Films From Popular Science Fiction Novels?”