This afternoon I saw a fantastic documentary, Finding Vivian Maier, about a person I’ve never heard of who deserves widespread fame.  Her name was Vivian Maier, and she was a nanny most of her life, and it wasn’t until she died that John Maloof, a young writer discovered she was also a photographer when he bought a box of her negatives at auction.  Vivian Maier, who was quite secretive about her private life, was not reclusive like Emily Dickinson, but she hide her art away, and the documentary even questions whether or not if Maier would have liked her pictures shown.  Maloof estimates he’s eventually accumulated 150,000 thousands of her negatives.  The documentary ends up being about many things, including Maloof’s tenacity of tracking down Vivian’s legacy and making it known.  He has her photographs on display in galleries around the world, and has published two art books of Maier’s work, with another coming out soon.

Maier died in 2009, and Finding Vivian Maier isn’t even the first documentary about her.  There’s another documentary, Vivian Maier: Who Took Nanny’s Pictures, directed by Jill Nicholls for the BBC that was rereleased in the U.S. as The Vivian Maier Mystery.  Maier was also the subject of other short films, and many news reports and essays.  Her story is so great that it’s impossible not to retell.

I don’t think I can tell her story better than these films I’ve found at YouTube.  If you get the chance, see Finding Vivian Maier at the theater, because her photographs are beautiful blown up on the big screen.  Maier mostly took street photos in New York City and Chicago, but did take an eight-month round the world trip by herself.  The bulk of her photographs were taken in the 1950s, 1960s and 1970s, and she captured a unique view of history.  Her photographs are gorgeously composed of daily life on the run.  Probably many of her subjects never knew they were being photographed.

I highly recommend watching these YouTube clips full screen.  Be sure and set the resolution to 1080p or 720p.  Maier also took many 8mm films.  These are interesting, but not beautiful like her black and white photos taken with a mid-format Rolleiflex camera.  Her Rollei photographs blow up on the big theater screens magnificently.  Maier also took color 35mm pictures too, but I like the black and white pictures best.  The film also shows huge crowds flocking to her exhibits.  I’ve love to go see them.  I’m surprised I’m so late discovering her, but then I think most people haven’t yet either.

Just look at the many images here.  The number of pictures taken is tremendous, and the variety of subjects is astounding.

Watching Finding Vivian Maier evokes all kinds of philosophical questions about art and life.  Why did she take so many photographs and not print or try to get them exhibited?  Like one documentary commentator said, for many of her images, the only time she saw them was when she pressed the shutter release, and even then she was probably looking at the scene and not the composing screen.

Maier is like the existential God who created the universe and then walks away from his creation.  Despite all the mystery surrounding Maier, it finally comes down to the art standing on its own.  Her images are captivating, haunting, riveting, compelling, and all the words you can imagine that say they make you want to look and look and look. 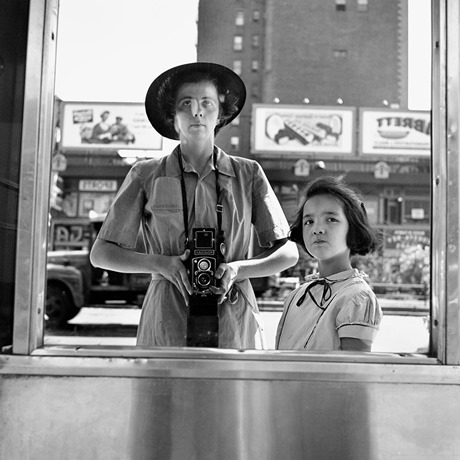