Today, September 3, 2013, I had to have Nick put to sleep.  He was almost 19.  His sister, Nora, died just two years ago, also in September.  Nick was a survivor.  When he was young Nick had cancer twice, having to have operations on his back both times.  For each operation they had to shave his back and turned him into ugly cat for months.  For years now Nick had mega-colon, an enlarge heart, a heart murmur, and arthritis in his hind legs.  Today they told me he also had severe anemia and needed a blood transfusion, plus his heart had a new fast arrhythmia, and his kidney function was worse than it was just a few months ago.

Susan and I had a hard time letting him go, but we decided it was finally time.

I hate putting animals to sleep because they can’t make this decision for themselves.  I’d like to think Nick would have thought it the right time too – for all I know, he might have been ready to go months ago, but felt obligated to stay around to be our cat because he thought it was best for Susan and I.  The doctors and staff at the Greene Animal Hospital were wonderful as usual.  Nick died very peacefully, and I only wish when my time comes I could go like that. 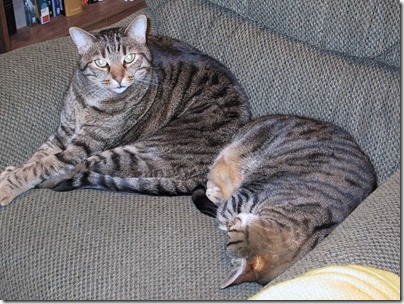 Nick was my all time favorite pet – although I loved all my dogs and cats.  He will be my last pet.  I couldn’t watch another grow old and die, and I’m not sure I could outlive another pet myself, and I wouldn’t want leave an animal that was attached to me that way.  Back in 2002 I went to Seattle for six weeks and I felt really bad leaving Nick – he always favored me in picking laps.  I worried about how he felt not finding me for so long.  And when I returned I could never tell if he recognized me or just found another person to like.

We got Nick and Nora back in 1994.  Yes, they were named after the famous movie detective and his wife, Nick and Nora Charles.  Nick and Nora were our second set of cats, with Yin and Yang the first.  Susan and I have been married long enough to outlive two generations of cats.  Nick was so small when we first got him, I could hold him the palm of my hand.  That was so long ago, and just yesterday.

When they were kittens, Nick and Nora loved each other, and like Yin and Yang, would play fetch with paper balls.  Susan and I would sit in our chairs and the cats would get on our footstools and wait for us the throw paper balls over their heads.  They’d leap high up into the air, snatch the balls in their paws, and sometimes even do flips before landing on their feet.  Half the time they’d even bring the paper balls back for us to throw again.  We’d always know when they wanted to play this game because you’d look on the floor beside your chair and find a pile of paper balls and a cat staring up at you.  They’d also play soccer, batting the balls around while chasing after them, scattering them all over the house.  But the cats would bring them to back us when they wanted to play fetch.

Sadly, both sets of cats got tired of these games as they got older.  And it was also sad, as they got older they became less friendly with each other.  For many years Nick would sit in my lap and Nora would sit in Susan’s.  If there were only one of us in the den watching TV they’d both pile up in a single lap that we called a double-cat.  If Nora got to a lap first she’d get pissy if Nick tried snuggle a space next to her.  At one time Nick got up to 20 pounds and Nora peaked at 16, so we’d have 36 pounds of cat on our laps.  However, as you can see, I’m no lightweight either.

Even though Nick and Nora stopped playing together, they stayed together most of the day.  It was hard to tell them apart at times.  After Nora died, Nick got the pick of our laps.  He loved sleeping on us – until we bought him a heating pad for his old age.  He loved that heating pad so much, but would always still spend a portion of the day sleeping on one of us. 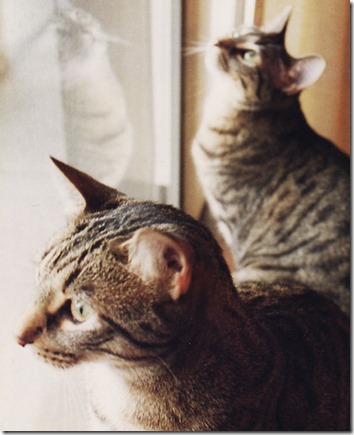 Many of my friends have worried that I will be lonely without Nick.  Since Susan works out of town, I’m by myself all week.  Nick has kept me company for five years now, but I’m not sure if I will be lonely.  Loving an animal seems much different from loving a person.  Loneliness for me is not having someone to talk to, and I can call Susan on the phone.  And even though I often talked to Nick, he never replied back or started a conversation.  What I love about animals, and what I will miss, is their nonhuman qualities.  We mainly communicate with animals by touch, sight, body language – and smells.  I’m not going to miss the smells, but I will miss having a creature that chooses to curl up on me.

In his old age, Nick got very set in his ways.  But then so am I.  For the last two years we lived like old bachelors, following a clockwork routine.  My life will take a new daily course without Nick.  It will take me a while to get used to it.  It took me a long time before I stopped seeing Nora after she died.  Twice this evening already I’ve thought I saw Nick.  It’s funny how we get used people and animals being in our lives, and how hard it is to not see them when they are gone.

But for now on, I will have to make furry friends with those creatures owned by my friends.  I was very attached to Nick and Nora, and I just can’t go through that again.  This might sound hard hearted, but from now on I only want to attach myself to beings that will die after me.