Sometimes I luck out and read two great books about different subjects that reinforce each other’s ideas and make each book more powerful.  Earlier this month I read Half The Sky: Turning Oppression into Opportunity for Women Worldwide by Nicholas D. Kristof and Sheryl WuDunn.  Now I’m reading The World Until Yesterday by Jared Diamond, about comparing modern society to human societies of the past.  Jared Diamond makes a case that human behavior is different under state governments than how we lived under pre-state societies.  Diamond describes life and psychology in hunter and gather cultures, as well a chiefdoms and tribal societies.  It might surprise you that there is much in the two books that overlap, but then any two books that chronicles so many cultures around the world are bound to overlap.

Half the Sky is introduced by saying 60-100 million women are missing from the current population.  Kristof and WuDunn point out that gender selected abortion, infanticide, the favoring of male children to receive medical care over females, enslavement, torture and other horrible social practices explain the missing females from the world’s population.

Jared Diamond also describes how pre-state cultures are hard on females.  His book explains why these cultures practice infanticide and gender selected abortions when they have access to technology.  What Diamond essentially says is our modern way of life is new and that humans lived much differently for millions of years before the advent of state controlled governments.

Most traditional cultures, as Diamond calls them, fought constant wars over women, food, land and natural resources.  Societies were male dominated and women were possessions.  Polygamy was the common marriage arrangement which inherently treats women unfairly.

If you blend the two books together you see that the world is going through a transformation.   We’re shifting from traditional cultures to state cultures which over time has abolished slavery and moved towards monogamy and fairer treatment of women.

Kristof and WuDunn make a case that if we change how we treat women, we’ll change how societies operate, and thus reduce terrorism and war, and increase economic activity and freedom for all individuals.  Diamond indirectly says states protects individuals and frees them from constant warring and violence, which is mainly caused by males seeking personal revenge and retribution.  He also points out the ownership of women causes much of the violence in traditional societies.

There is a synergy between that and the TV show I’m watching on DVD, Hatfields & McCoys.  The two feuding families were more like two feuding tribes.  I find further reading synergy between the above and the book Empire of the Summer Moon by S. C. Gwynne describing the history of the Comanche Indians, and The Old Testament.  The Old Testament is a history of the twelve tribes of Israel conquering the Canaanites, and later about the twelve tribes of Israel trying to survive the onslaught to two state run societies, The Babylonians and The Romans. Empire of the Summer Moon is about the Comanches fighting the onslaught of the United States of America, another state run society.

For most of human history we live and fought each other as small groups.  The standard operating procedure was kill your enemy, enslave the women, and adopt the children.  The Old Testament illustrates this perfectly.  Sometimes God told the Israelites to kill everything that walks and crawls when they invade a village, and sometimes God told them to kill only them men and keep the women and children.  The tribes of Israel acted no different from the Comanches.  Whether they were as cruel in their torture was not noted in The Bible, but I expect it was pretty much like what we saw between the Hutu and the Tutsi.

The upshot of all these books is individual freedom, peace, gender equality, the semblance of justice comes from state run governments.  If we don’t want tribal societies like the Taliban or Al-Qaeda then we have to promote strong central governments.

Kristof and WuDunn don’t go into this directly.  They just advocate uplifting women where we can, but what that really means if Jared Diamond is right, is we have to eliminate old traditional ways, which is a kind of cultural imperialism.  Diamond is very fond of traditional societies and thinks we can learn from them, and that might be true, but he knows we can’t maintain all the old ways.  This is best illustrated in his introduction when he compares 1961 New Guinea people to 2013 New Guinea people.  The World Until Yesterday is an extremely important book.

In a pre-state society, safety is living very close to your tribe and your tribal alliances.  It is extremely unsafe to venture far and meet strangers.  Nearly all strangers are considered enemies.   If you are alone and meet a group of strangers expect to flee or die.  If you are with your friends and find strangers in a smaller number, expect to kill.  This is the basis for our xenophobia.  It worked the same for the Hatfields and the McCoys.

In a state society we learn to trust strangers.  We can safely travel the world as long as we don’t venture into traditional societies.  When you go to France you don’t expect the Frenchmen to kill you.  That won’t be true in areas where people still live by traditional ways.

Kristof and WuDunn inadvertently make the case that lingering traditional societies are killing off women, or cruelly oppressing them, and that we need to spread strong governments into traditional societies.  What they explicitly advocate is finding gentle ways of changing social customs in traditional societies to be more enlightened about women.   If you read Empire of the Summer Moon you’ll see how 19th century people wanted to gently change the Comanche.  It didn’t work as planned.  I doubt changing the Taliban will be any more of a success. 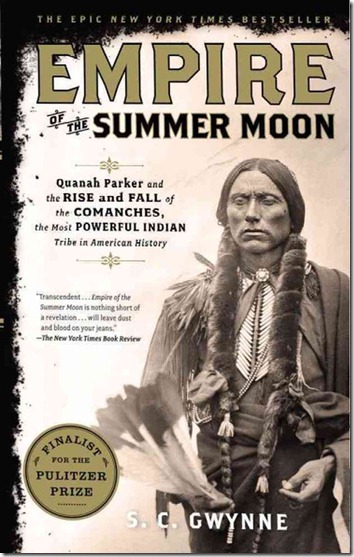 Strangely enough, the real vector of change is television and the internet.  Knowledge is homogenizing.  Citizens of traditional cultures resent being forced to change.  Practices like infanticide and female genital mutilation are natural, if not holy and good to them.  It is insulting to these people to tell them their ways of doing things are evil and grotesque.  But if they are given a choice they sometimes choose to change on their own.  Television and the internet help them see their choices.  Kristof and WuDunn say helping women will cause positives changes too.  That’s a great hypothesis to test.

I highly recommend reading Half the Sky, The World Until Yesterday and Empire of the Summer Moon together for the strong synergy of ideas.  All too often we think our way of doing things is the right way, and everyone else’s way is wrong.  Many people advocate cultural relativism, but I don’t.  I believe individuals are more important than cultures.  There is no superior culture, but I advocate the maximum protection of the individual with the goal of giving everyone the most freedom possible.  That avoids the which culture is better issue.  Of course, individual freedoms tend to homogenize societies because it does away with violence, gender bias, slavery, polygamy,  and all kinds of other culture beliefs that tend to color individual cultures.