“Change Myself” by Todd Rundgren

Half the Sky: Turning Oppression into Opportunity for Women Worldwide by Nicholas Kristof and Sheryl WuDunn has dozens of real life stories about exceptional women changing the world.  Kristof and WuDunn are two Pulitzer Prize winning reporters who have traveled the globe, gathering thousands of facts culled from hundreds of research articles and interviews with leaders about the problems we face making women truly equal to men.  Half the Sky is a gut wrenching chronicle of real life suffering, more horrific than the wretched that Victor Hugo wrote about in Les Misérables.  Half the Sky is a book that will make many readers want to change the world too, although I’m afraid most will want to hide away in escapist fiction.  This is an intense book about the nature of our reality.

For all the misery that Half the Sky presents, it’s important to know Half the Sky is a positive narrative about heroic women changing themselves and their communities.  I doubt there will be any readers not humbled by this book.  Changing the world is tremendously difficult.  We’re talking theory of relativity hard, but not impossible as these stories prove so dramatically.  Helping others is far more difficult than writing a check, although you should write plenty.  Charity is a complex endeavor.   Often helping others causes more misery, and just giving money can be corrupting.

We need to change the way we see charity.  Changing the world is about changing ourselves.  And we all know how well we do with New Year’s resolutions.  To help others, we have to help ourselves first, and reading Half the Sky is a start.

I’ve come to this 2009 book late, but I’ve yet to meet any of my bookworm friends that’s read it.  A few months ago, PBS presented a two part documentary based on this book.  It’s now available for sale and on Netflix streaming.  Half the Sky is becoming a movement.  I highly recommend reading the book first, because its far more educational. It will prepare you to appreciate the documentary all the more. 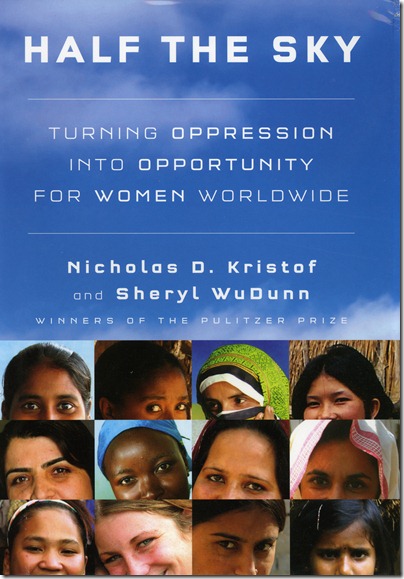 Americans Have Already Won The Lottery

It’s hard to think about so much suffering worlds away.  We have plenty of poverty and injustice in this country, yet compared to the rest of the world, most Americans have already won the lottery – in money, freedom and equality.  And we spend hundreds of billions every year on protecting our country, either through defense, foreign aid, or influence.  And after eleven years of war in Afghanistan and Iraq, and trillions of dollars, we have not eliminated terrorism.  Kristof and WuDunn point out, time and again, that terrorism is a product of male dominated societies, and that we could more effectively fight it far cheaper by just promoting the equality of women in these cultures.  I don’t know if they are right, but we should try.  Our expensive testosterone solutions haven’t worked, have they?

Americans are quite charitable, we give away billions of our own money to help others, but how effective are our dollars?  In case after case, Kristof and WuDunn show how insanely hard it is to actually help people, even when we have the money and volunteers.  You can’t just buy equality.  You can’t just pay men to stop enslaving and raping women.  And even when our hearts and money are in the right place, like with Three Cups of Tea and the education of girls, things get corrupted.

Read Half the Sky carefully, because it’s about creating effective business plans to change the world.  That means changing ourselves.  We have to help people help themselves.  It’s about teaching people to fish, rather than giving them fish.  It’s about education.  But it’s also about how we help ourselves, our country and our culture by uplifting women in distant lands.

Even though America is a leader in gender equality, we still have a long way to go.  As long as Americans bitch about paying property taxes for education, or can’t understand concepts like Title IX, or why fifty percent of Congress and corporate leadership shouldn’t be women, then we do have a long way to go, but we can still help the women elsewhere.  The battles won by the women portrayed in Half the Sky should inspire us.  I don’t have one millionth of the guts and determination of some of these women I read about, and I’ve had a million times more money and opportunity than they have.

With every TV show you watch, with every movie you attend, with every book you read, with every song you hear, observe closely and ask yourself do you see gender equality, freedom from sexual oppression, equal opportunity for women?

Until women are truly free and equal everywhere, most of the problems we face as an evolving species won’t be solved.  It will take one hundred percent participation, and quite often as I think Half the Sky so effectively proves, it’s the inequality of women that’s causing our bigger problems.

5 thoughts on “How To Change The World?”