Are all superheroes as durable and immortal as Wile E. Coyote?  My wife and I went to see The Avengers the other day.  Normally we don’t go to movies about comic book characters, but The Avengers was getting such great reviews we thought we’d give it a try.  I went through a brief comic book reading phase in 1963, and I’ve seen the first Christopher Reeves Superman and the first Michael Keaton Batman, and that’s about it for my comic book experience.  As a child I loved the George Reeves Adventures of Superman TV show and the Mighty Mouse cartoons.  One of my  first blogs was about memories of all us neighborhood kids wanting to fly, “Super Men and Mighty Mice.”

I am a lifelong science fiction fan and computer geek, so I’ve been around a lot of people who love comics.  By all accounts, I should love comics too, but for some reason I don’t.  I’ve read books and watched documentaries about the history of comics and their fans, so I’m not completely ignorant of the genre.  But watching The Avengers was probably what it would be like for me to attend the opera, I was way out of my element.   It made me want to ask a lot of questions. 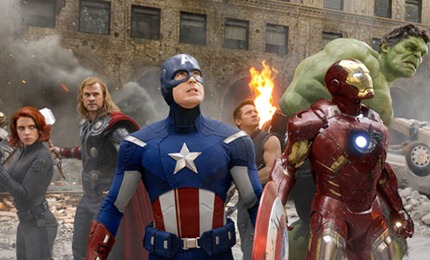 This isn’t a review of The Avengers.  I’m quite confident it’s a great movie for its intended audience.  I’m not the intended audience, and it left me wondering about many things, and I obviously don’t have the right mindset.  Maybe if I knew how the game was played I could have enjoyed the movie more.

My first question is:  Are you expected to check your mind in at the theater door when going to see a superhero movie?  Is the fun of such a show returning to the state of mind you had before starting 1st grade?  Is part of the thrill forgetting all logic and science?  Is the fun of watching The Avengers pretending to be five years old again?

Many people call superhero movies science fiction, but I really hate that because it suggests that science fiction can be completely ignorant about science.  I’d go so far as to say that superhero movies are anti-science by ignoring the laws of physics and coming up with really insane concepts and suggesting they are science based.  For instance, in The Avengers the whole story is built around a power source called a tesseract.  A tesseract is a geometrical concept, a 4D cube.  The film also has a flying aircraft carrier, space aliens, Norse gods, mutated humans and flying metal suits with no apparent fuel supply.  Plus characters can pound on each other like Warner Brother cartoon characters and behave like the Three Stooges and no one ever gets hurts, much less bruised and bleeding.

I have to ask:  Do superhero movies exist in a reality similar to the reality where Bugs Bunny and Moe, Larry and Curly exist?  That’s okay if that’s how to play the game, but to me fictional realities with no rules ruins the fun of make-believe.

And, why are superheroes like Greek and Roman gods?  They have all kinds of powers, they fly, they are petty and egotistical, and they fight with each other.  Also, we’re asked to believe that the fate of humanity depends on these beings saving us time and again.  Doesn’t that seem like some kind of transference from religion?  Are fans of superheroes worshippers?

Don’t get me wrong.  I’m not saying people shouldn’t watch superhero movies.  These movies are loved by millions, and the movie industry makes huge profits, a big US export, so they are great for the economy.  All I’m asking is if other people don’t question the fictional reality of the comic book superhero world.  I love science fiction, and even some fantasy, but the world of superheroes seems way out there, way beyond any possible believability.  Or is that their appeal?  Are comic books a genre about an alternate reality with no scientific laws and magic works?

I mean, we’re talking the age of myths.  It’s like reverting our minds back to a Paleolithic mindset.  Talk about your old time religion, this kind of magical thinking would put us back in the time of Genesis and Exodus, when the world was full of powerful beings, magic and great catastrophes.    Why are superhero movies so appealing?  Do people actual crave a time when the laws of physics were totally unknown and seeing is believing?  Of course this state of mind was how the whole world existed before science.  Maybe comics should be called pre-science fiction.

Watching The Avengers, it bothered me that normal humans were like ants scurrying around waiting for the superheroes to save them.  You could call superhero movies salvation films, because their plots often reflect evil wanting to destroy mankind and superheroes saving us.  Of course, we could just let Joseph Campbell explain the whole hero with a thousand faces again.

I grew up on the science fiction of Robert A. Heinlein, and he liked to believe that humans were the most dangerous critters in the universe.  He thought normal people could take on all challengers in the galaxy, and only ordinary human heroes were needed.  I thought Heinlein was overly aggressive in wanting to kick alien ass, but I do like his idea that we should live and die by our own abilities.  I don’t want to babysat by gods, mutants and aliens.

Watching The Avengers made me wonder if superhero movies are like porn movies, but instead of making you want sex, they make you lust for power.  That each of the Avengers represents powerful abilities movie goers would love to have themselves.  But if you really think about the Avengers, do you really envy them?  Who would want to be The Hulk?  Or Thor?  I bet most people envy the billionaire playboy, but does being a super-asshole have to come with the power suit?  Captain America seems like a nice guy, but that outfit!  Really?  How important are those awful clothes?  Can Superman fly just in jeans and a t-shirt?  I wouldn’t mind being able to fly like that if I didn’t have to wear a leotard and cape.  And Batman looks like a pimped out S&M freak.

What kind of inner fantasies do superheroes appeal to?  Has anybody asked their therapist?

Movie fans flocked to The Avengers and loved it.  I’m just curious as to why.  Asking me to believe in flying aircraft carriers is insulting to me.  I guess my imagination has limits.  I can accept angels and monotheistic robots in Battlestar Galactica, but I can’t accept flying aircraft carriers.  Why.  Did it do anything up in the air that it couldn’t do floating on the ocean?  Where was it going, and where did it come from?  As far as we knew it was just flying around in a holding pattern.  How was a flying aircraft carrier important to the plot?

Also, why are all the superheroes equal in durability.   Shouldn’t their be some kind of hierarchy of power?  Shouldn’t their be a chain of command?  They should be like rock, paper, scissors. Thor can hammer Loki, Loki can outwit The Hulk, The Hulk can forge Iron Man, Iron Man will bend Captain America, Captain America can romance Black Widow, and Black Widow can seduce Thor.  Why do they squabble and punch each other like Moe, Larry and Curly?  In the movie our heroes spent more time fighting each other than the enemy.  My wife barely liked the movie, and thought it was okay as a comedy.

I was bored.  I’m 60, so I’ve seen a lot of movies with explosions and cities blowing up.  I didn’t see anything new in special effects, or any new action sequences that I didn’t see in 1996 watching Independence Day.  In terms of creating an alternative reality, The Matrix (1999) had just as much comic book action as The Avengers, and it was believable within its own context.  Of course, that leads me to ask:  Am I suppose to assume all superhero movies exist in the same alternate reality and it’s an assumption I should come to the theater believing, or do each of them create a new reality to explore?

I’m used to science fiction where every story invents a new reality for the reader to judge.  So I’m asking:  Are superhero stories all set in a shared comic book reality.  Or is it two realities, Marvel and DC?  Dune isn’t the world of Foundation, and Foundation is not the world of Blade Runner, or Starship Troopers.  To me it seems like superhero reality is one shared by all comic book writers and it would believable that Superman could fly along side Ironman.

Like I said, I really don’t mean to pick on superhero movies.  I love westerns and old movies from the 1930s, and most of my friends don’t.  So I can understand my taste for comic book movies is just not suited for the genre.  My not liking comic book movies is no different from me not getting into opera or basketball.  It’s not a criticism.  I just wondered into the wrong movie theater and went WTF?