Empire of the Summer Moon by S. C. Gwynne is subtitled “Quanah Parker and the Rise and Fall of the Comanches, the Most Powerful Indian Tribe in American History.”  Empire of the Summer Moon is the kind of history book that makes you want to give up reading fiction, because it’s far more riveting than most novels.  Empire of the Summer Moon starts with the Fort Parker massacre in May of 1836, when Cynthia Ann Parker, then 9 years old, was captured by the Comanches.  After the gruesome attack on the private fort, S. C. Gwynne digresses by jumping back to give a bit of history of the Nermernuh, the Comanche name for their people, migrating down from what is now Wyoming, to Texas, Oklahoma, New Mexico and southern Kansas. 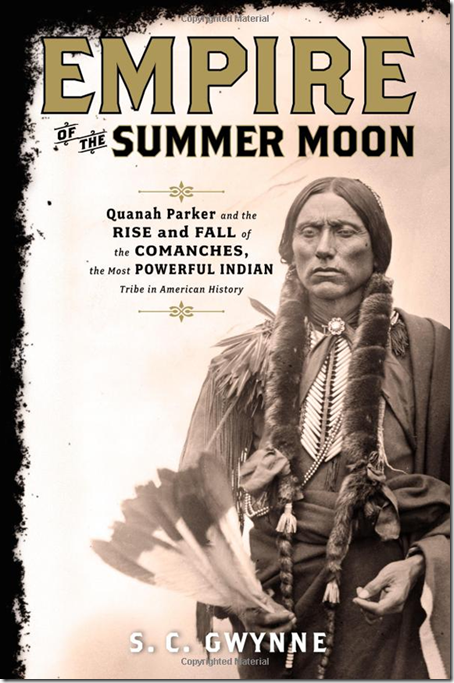 Gwynne teases us through the whole book, by returning to the story of Cynthia Ann Parker, one of the most famous captives of the West, and her son Quanah Parker who became the final leader of the Comanches, which I considered the main story.  Gwynne often leaves their personal story to explore on the larger history of the Comanches, and how the Spanish and Mexicans came up from the South, and the Americans from the East,  to invade and destroy Comancheria over four hundred years.

Empire of the Summer Moon is a story about a clash of cultures between 19th century Europe invading the territory of what is essentially a late stone age hunting and gathering people.  If you’ve seen John Wayne’s great film The Searchers, then you’ve seen a cleaned up story based on the same real-life history chronicled in this non-fiction book.  I grew up loving westerns – movies, TV shows and books, but they don’t hold a candle to Empire of the Summer Moon when it comes to gritty realism.

This is a complex story.  It involves genocide, terrible acts of violence, rape, torture and war, with magnificent struggles of survival by individuals, and the  manifest destiny of one people against the way of life of another.  This is a meaty book that begs for the 12 hour Ken Burns documentary treatment.

It’s also a book of ethical issues.  Should the Europeans have destroyed the Indian way of life?  As Gwynne points out, the Indians loved warring amongst themselves, and everything the Comanches did to the whites they also did to all the tribes around them.  And for most of several hundred years the Comanches were the superior fighting force able to hold their own against the invading white man.  It wasn’t until after early Colt revolvers were introduced in 1844 that technology changed in favor of the Texans battling the Comanches, but it wasn’t until after the civil war ended that the U.S. got serious about ending the conflict for good.  Whether this was intentional genocide or just crushing cultural imperialism is hard to say.

Either way you look at it, we took away the Comanche way of life of living on the plains and hunting the buffalo.  The Comanches had their own form of assimilation.  They would attack their enemies, kill the males, rape and enslave the woman, but adopt the children.  Cynthia Ann Parker grew up with the Comanches and loved their way of life and did everything she could to keep from being recaptured by the whites.  The Comanches knew they couldn’t convert grown male captives, and didn’t try.  But that’s exactly what the Americans wanted to do, to convert the male Comanches from buffalo hunters into dirt farmers.  We thought we were being fair and enlightened, but maybe it was the most unethical and cruelest treatment of all.

Few Indians could adapt to the white man’s ways, especially in the corrupt reservation system, but Quanah Parker, a young Comanche chief and fierce raider did just that.  Did Cynthia Ann Parker’s genes help him?  I would think so, but I’m not sure.  Quanah Parker moved to the reservation in 1875 and lived to 1911, becoming quite successful and was even a friend to former enemies and presidents, often traveling east, and even got to act in an early silent movie.  I wished that Wynne had written twice as much material on this part of the story because Quanah Parker was an amazing man – especially when you consider his early life was spent in acts that would sicken all but the worst serial killers.

I’m not sure who the targeted audience is for this book.  I would think anyone who loves American history, especially history of the westward expansion in the 19th century, would love this book.  I would also think anyone who loves watching westerns would love this book.  I wonder what the 14,700 modern day Comanche readers would think of this book?  Was it a fair portrayal?  But I also wonder what the citizens of our country who dislike criticism of America will think.  Gwynne does make a good case that many 19th century Americans did want to flat out exterminate the Native Americans, and even showed the eastern liberals who wanted to do fair by the Indians failed miserably.

I highly recommend this book to fans of westerns though.  Empire of the Summer Moon proves that most westerns are inaccurate at best, but more than that, makes me realize that most fail to capture the time in any authentic way.  The book shows we have a collective fantasy about the old west that is absurdly simple minded.

6 thoughts on “Empire of the Summer Moon by S. C. Gwynne”