I am not a comic book reader but I found this history of the comic book industry on trial in the 1950s to be a fascinating story.  The Ten-Cent Plague: The Great Comic Book Scare and How It Changed America by David Hajdu covers the origins of the comic strip, the appearance of the comic book in the 1930s, and its creative heyday in the 1940s and early 1950s, and then focuses on how some Americans got scared and eventually brought about book burning, censorship and laws against publishing comic books.  The mid 1950s was a long time ago, and I was just a kid, so I don’t remember these events.  But the comic book scare coincided with the red scare, the Joe McCarthy witch hunts.  Comic books lead to another kind of scare, not over communists, but the fear of juvenile delinquents and the corruption of the young.

Most of the focus of the 1950s comic book scare was on true crime comics and horror comics.  Today when comic book conventions are covered on Entertainment Tonight, showing famous celebrities in attendance, and many of the top grossing movies are based on comic books, it’s hard to think about a time when comic books would scare Americans into having book burning rallies.

The irony here is everything that the censors hated about comics is standard fare on prime time TV today.  The censors did not want children seeing stories about crime and criminals, or reading about vampires, ghouls, zombies, werewolves, and their undead kin.  Nor did they like stories about young women running off with the bad boy types, or leaving their husbands to find exciting careers.  Parents, congressmen and censors feared that comics were undermining the status quo.  Comic books were outlawed just as rock and roll hit the scene, and then came the beatniks, hippies and all the other counter culture bellwethers.

If we could take our present day pop culture back to the 1940s and 1950s it would blow the minds of Andy Hardy/Leave it to Beaver America, and the fear mongers back then would think they had been absolutely right about censoring the comics.  They censored comics and made kids read Casper the Friendly Ghost, but it didn’t stop the cultural upheaval they feared.  Does censorship ever work?

To get some idea about the censorship of this time, watch David Hajdu talk about the last comic book EC Comics published:

The surprising element of this story for me was how much this era was loved by the comic readers of the time.  They considered the advent of censorship as the destruction of a great art form.  To be honest, I never really liked comics, but then I never read any from the golden age that the The Ten-Cent Plague chronicles.  Comics to me always equaled stories about super heroes, but before the great censorship there were hundreds of titles about endless topics, that sold in the tens of millions each month.  But this was also before the success of television.  And Hajdu doesn’t mention that the pulp magazine was also dying at this same time even without censorship.  Evidently the boob tube put the kibosh on pulp fiction, both written and graphic.

A lot of things changed in the 1950s.  Radio stories died out, and so did Saturday afternoon serials.  Culture went through tremendous change in the 1950s, as witnessed by Bill Bryson in The Life and Times of the Thunderbolt Kid, which I read about a month ago for the second time.  I do have tremendous nostalgia for that time, and even though I dislike crime and horror stories in general, Hajdu makes me want to read those pre-Code comics.  I guess I sympathize with that comic culture because I love pre-Code Hollywood movies from the early 1930s.

I listened to The Ten-Cent Plague, so I had no idea what these comics looked like.  I’m not even sure if the hardcover book had photos.  However, the comic book history is well documented on the web.  Here is the cover used in a senate hearing described in the book.  William Gaines, the publisher of EC Comics was asked by Senator Estes Kefauver if he thought this cover was in good taste, and Gaines shocked everyone by saying he did think it was in good taste.  I do have to wonder about this being reading material for children though, but then people wonder the same thing about kids and video games.  Gaines said this cover was in good taste because the artist didn’t show the severed neck on the head or body.  Since they do show those parts now in movies, I guess our movies are in bad taste. 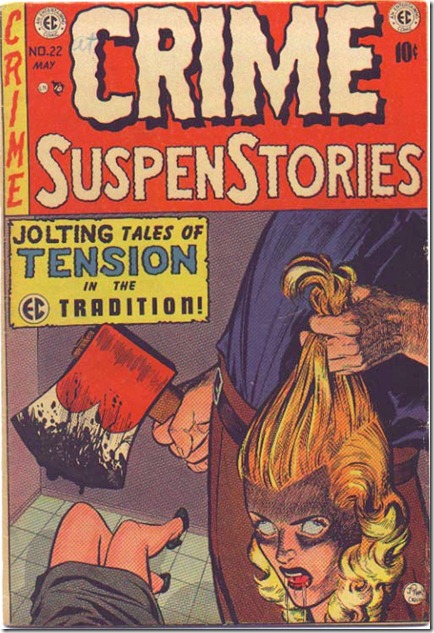 I found this cover and many others at Classic Crime & Horror Covers.  That site linked me to Crimeboss, with an extensive collection of covers.  I wanted to see what the interiors looked like and found The Horror of it All.  I quickly discovered that the history of comics, and especially the pre-code era, is well documented on the internet.  Comic books are a sub-culture I know little of, and would probably be satisfied with reading one good coffee table book about its history to catch up.  The sub-culture is gigantic, and I wonder what Fredric Wertham, the author of  Seduction of the Innocent, and his disciples would make of the huge success comics have in our society today.

I’m an outsider to the fandom of comics, and I have little interest in reading comics.  I don’t mean to put them down, but they are like opera or ballet or polka music, I just never got into them.  However, there was one story Hajdu told about that I might seek out – It Rhymes with Lust, a comic book that some consider the first graphic novel. 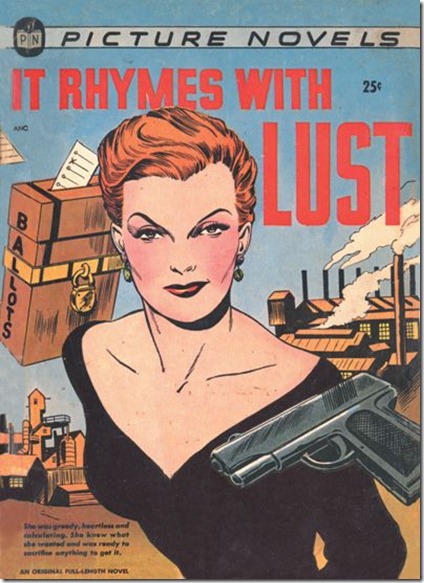 From what I can tell, the story is probably like a movie Joan Crawford or Barbara Stanwyck would have been in the 1940s, so why all the fuss?  Were ten year old kids really reading these film noir comic books?  And if comics were so pervasive in society in the 1940s and 1950s, why don’t we see characters in the movies from those times reading them?  From David Hajdu’s account, the history of the comics and their downfall was obviously more than a tempest in a teapot because many states and cities took the time to criminalize the sale of comics, and schools and PTA groups took the time to buy thousand and thousands of comics so they could burn them in PR events.  Evidently millions of people were buying comics then, so why hasn’t literature or film from those times featured stories about the sub-culture?  There were many films about early rock and roll fans, or jazz fans before that.

I found The Ten-Cent Plague a fascinating story, but I’d like to know more.  I wonder if my father or his brothers read the pre-code comics?  They never talked about them.  Except for these rare histories of the era, I wouldn’t have known these types of comic books even existed.  When the comics were banned many of the artists and writers had to hide their love of their art because they were treated like child molesters.  Is that why this sub-culture was so thoroughly forgotten?  Did America hate comics that much?

By the way, the 1988 documentary Comic Book Confidential makes a great visual supplement to The Ten-Cent Plague because they interview many of the people profiled in the book, and show some of the same court films that Hajdu described. Plus the documentary continues the history of comics after the code was enforced, which is where the book ends.  This film is available at Netflix and segments from it are at YouTube.

12 thoughts on “The Ten-Cent Plague by David Hajdu”