Edith Wharton’s 1920 Pulitzer Prize winning novel, The Age of Innocence, is a story about how people never communicate their real feelings.  Wharton suggests at the end of her book, set twenty-five years after the start, that the next generation is more open, but I’m not sure even a hundred years later, in our own times, if this is true.  The love triangle of Newland Archer, his fiancée May Welland, and her older cousin, Ellen Olenska is shown through the viewpoint of Newland’s mind.  Edith Wharton does an excellent job of taking on a male point-of-view, considering the cultural restrictions of her time, and her consideration for the minds of people from the 1870s. 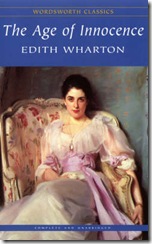 The Age of Innocence is a story of culture and manners and their impact on people.  Newland Archer knows what he’s suppose to do, and how other people are suppose to act, but within his own mind he wants to be different, and imagines that maybe other people do too, but his life is frustrated by the few clues he gets to verify his theories.  He thinks he has the perfect young woman lined up to be his wife and then he meets a woman who has run away from her husband, a Count no less, abandoning wealth and position, to flaunt traditional behavior.

Countess Ellen Olenska is described as looking old at thirty, and no where near as beautiful as her younger cousin May, at twenty-two.  Yet, Newland Archer finds himself more attracted to Ellen.  Plenty of other men do too, and readers are never sure how many men are chasing Ellen, or how many are catching her.  Many men want to make her their mistress, but we’re never told the details of the relationships because we only get to know what Archer knows.  He gets conflicting information from Ellen and the people who know her.  Archer is never sure what May is thinking, or Ellen.  He often plays games, telling himself if this happens, he’ll do this, and it means that, but they never work out like he plans.

Archer wants to tell May, sorry old sport, but you’re as dull as your society, and then run away with Ellen.  We know that even in Wharton’s time, 1920, men were doing that, and readers today probably have a very hard time understanding why Newland didn’t just chuck it all for love, but then I guess that’s why Edith called her novel the age of innocence about the 1870s.  In our times, we act on our impulses but do we communicate why?

People today still don’t say what they’re thinking but instead communicate with a strategy like the old Battleship game, where players try to guess the location of hidden ships on a grid.  Readers following along behind Newland Archer and watch his strategic plans and waits with him to see if his remarks hit anything in the minds of May and Ellen, and then ponders along with Archer about May and Ellen’s commands back and if they offer any clues to what they are thinking.  Even to the end, what May knows about Archer’s feelings for Ellen is ambiguous to the reader, but Wharton lets us know that May is no dummy and is playing her own game with as much passion as Newland’s.

We know even less about what Countess Olenska is thinking.  Is Archer someone special to her, or is he just one of many men that she plays along.  And does Archer really want to know?  Edith Wharton has written a beautiful masterpiece about the battle between the sexes.  The ending is perfect.  Reading this novel makes me, and I assume other readers, wonder why people don’t just say what they are thinking.  My guess is we’re afraid of shattering our fantasies.  Our expectations of other people are all built on fantasy, speculation and desires.  If men knew what women were thinking it would be crushing blows to our egos and sexual fantasies.  If women knew what men were thinking it would be the end of romance.

8 thoughts on “The Age of Innocence by Edith Wharton”